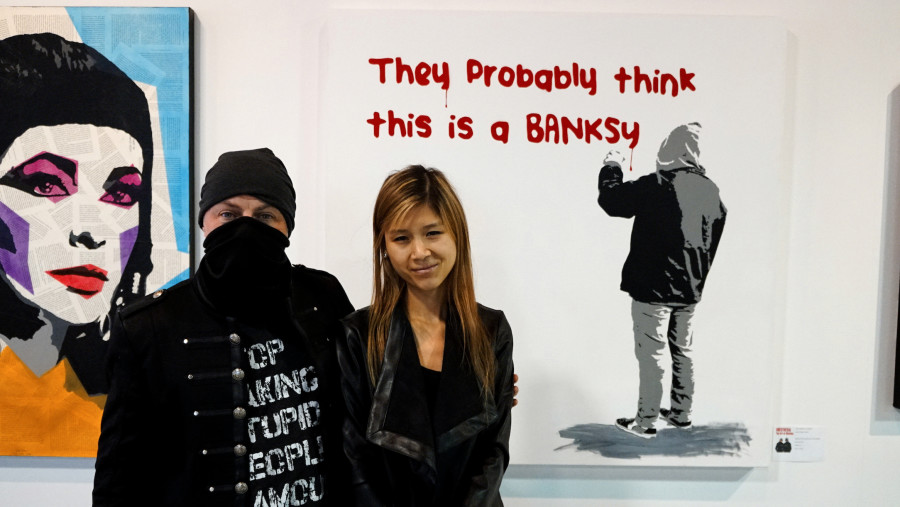 Holy shit, today was a struggle bus. Not sure I’ve ever wanted to snooze my alarm more than today. You know those days? This morning, I had an appointment with Plastic Jesus, at his Anesthesia: The Art of Oblivion art show partnered with Billy Morrison. I was just here last night for the VIP reception, but today, it was open to the public. Not too shabby starting off a beautiful Saturday surrounding yourself with dope art.

I pull up to Gibson Brands Sunset (formerly Tower Records) to meet Ural, who agreed to shoot the interview. Shout out to him, he’s the illest. Plastic Jesus greeted us warmly but, was busy tidying up the space for the 12 p.m. opening. We casually got some B-roll, I loved seeing pieces I miss the first time around. But what really amused me were the flowers left on Kanye Jesus from the night before, joined by Gary Numan, Ozzy Osbourne, Billy Idol and more.

I wanted the inside scoop on Kanye Jesus. Mission completed. Did you know the Yeezys on the statue’s feet are fake?! Smh. False advertising. I was low key mad. But then I remember, they’re actually not that easy to come up on. Forgiven. Afterward, he showed us some of his favorite pieces. This Banksy one was definitely a top three of mine as well. So dope.

this shit is too fitting for los angeles. ?? @plasticjesusart pic.twitter.com/KV5IiHAbIz

This piece is so relevant, especially in the heart of Hollywood. When we were wrapping up, Plastic Jesus invited me to come by his studio by USC anytime. What a kind gesture. Thank you for being so fucking down-to-earth.

My next spot consisted of driving to Long Beach for some trill shit. I can’t reveal anything yet, but it involves a dope rapper, a beautiful Japanese garden, and makeup. Kay, I probably just gave it away lmao. Definitely excited to share the drop with ya’ll.

So, my parents are actually in town for the weekend, which means go big or go home. They chose to stay at the J.W Marriott downtown at L.A. Live, which is conveniently located next to my brother and I. I was coming from LBC and had to go home to get right (story to come), but was able to make the 7:15 p.m. showing of The Great Wall featuring Matt Damon. This shit was terrible lmao. Normally, I have something positive to say about all movies, but walking into monsters on the screen turned me off. Sci-fi is not my steez.

As long as my rental units were happy, we were happy. They’re Chinese immigrants, so this was (probably) a lot more exciting for them. The film is also directed by a famous Chinese director and stars a famous Chinese actress. The only positive thing I have to say is that it is all action. But the picture was whack. I hate when you can tell it’s a green screen.

The J.W. Marriott is connected to the Ritz Carlton, and literally ten feet away from the movie theater. You know I had Plies replaying in my head the entire time. That’s my jam. The inside of the hotel was fucking so glamorous. I had a nice time people watching The Money Team (#TMT) from the moment their van pulled up, all the way inside. My brother ended up running into Pau Gasol twice throughout the night. Both times without me.

The best part of the stay here was the Club Lounge, hands down. Everyone probably thought I was a tourist, taking pictures like a basic bitch. Hi. I live ten minutes away lmao. The endless goodies and drinks paired with breathtaking views were priceless. In that moment, I realized why my rents chose this spot. My dad works too damn hard to stay elsewhere.

After almost seven long years in L.A., today was my first time visiting The Getty Villa. There’s two: The Getty Center by UCLA and The Getty Villa in the Pacific Palisades. The first one is a lot more accessible, but the latter was a treat. My parents were in town, so this was definitely worth the push. It was a gloomy day, and the risk of rain was upon us.

The museum is free, but you have to reserve tickets ahead of time online. We were on track to hit our 2 p.m. time slot, rolling down the beautiful PCH. You see nothing but beautiful beaches and blue ocean on this drive. It reminded me of my part-time job as a cocktail waitress at Bel Air Bay Club. That drive was something to look forward to each shift.

This courtyard is its prized possession. Definitely a photo opp. It reminded me of our trip to Europe. It’s basically a taste of ancient Greece and Rome in the States. My brother broke down the backstory for us. An oil tycoon by the name of J. Paul Getty pretty much owned this company and got hella rich from it. This lead to the creation of the Getty trust, which resulted in these two museums. Translation: he was fucking lit. And today we saw why.

The detail is incredible. This is supposed to represent an ancient Roman country house. Where my history majors at? The museum itself is pretty quick to get through. Different rooms full of artifacts and what not. My rental units didn’t seem too interested lmao tbh. They’ve been overseas and taken endless tours. The best part was definitely the gardens- so green, so beautiful. Besides lunch at their cute cafe, we were done in an hour.

mannnnn i live for this ? @RitzCarlton pic.twitter.com/KvCClcxzr8

I posted up at the Club Lounge in the J.W. Marriott again. You know why. It was perfect timing to catch some pre-Oscars festivities. I can’t get over this part: the concierge had put aside a handful of mini-Strawberry Lemonade Tootsie Rolls because I had a moment yesterday, saying how I had been looking all over for these guys. This flavor in particular. What a fucking sweetheart.

Finally, the day has arrived. This game was written in our planners for months. We later had a moment discussing how this was the one thing we had to look forward to, and now it’s over lmao. The Los Angeles Clippers vs. Charlotte Hornets at Staples Center. The game was at 6:30 p.m., which was an hour earlier than normal night games. If I didn’t double check, I would have shown up at 7:30 p.m. Fr.

The reason we chose tonight’s game was because V is a fan of Kemba Walker, who actually made it to the All-Star team. Salute. You guys know I’m a Dubs fan, but when I attend Clippers game, I’m all team Crawford. It was me vs. her tonight lmao. I’m so competitive. Shout out to her roomie attending her first basketball game and Code Green coming through to celebrate Er’s birthday.

I literally walked ten feet from the hotel to meet them at Starbucks. So clutch. It couldn’t have been more perfect. We were seven heads deep tonight, so I was a little concerned on my usual sneaking down to the lowers finesse game. But it was cake. We just sat down like we owned the place. Unfortunately, we had to split the group up, but it was worth the sacrifice.

that moment the announcer says "jeremy lamb" and i freak out thinking he said "jeremy lin" smh lmao ?

This was such a fucking great game to go to. It went into OT. Blake Griffin is just too good. And my man Crawford, CP3, DeAndre Jordan. Squad. Clips with the W. I couldn’t get over how funny it was when the announcer said “Jeremy Lamb” and we mistook it for “Jeremy Lin.” I legit wanted him to be there so bad. He used to be on the Hornets.

Ya girl got verified at the game. That was a trip.

Monday’s are always rough. But an advancing screening of Kong: Skull Island with free popcorn and drinks makes it better. I pull up to The Theatre at Ace Hotel in downtown L.A., one of my favorite venues, around 7:30 p.m. They always take care of us.

This was exclusive. No social media promoting or videotaping. I ran into a ton of homies tonight, always the best part of these events. Shout out to James introducing me to Dizzy Wright. I’ve been such a day one fan. Excited to hear him drop his new, new. They took the third row while my boss, Thurz, and I took the second. We wanted to be close to the action. Well, I did lmao.

#kongskullisland was fucking lit. ? if #kongtheking was coming after me, i'd def call my bro for help. idk who @laffit is calling lmao? #laloveskong #dtla

This was the best way to start the evening. Shout out to Nelson from Dash Radio for letting me crash his video lmao. Okay, the actual movie. Fucking lit. I enjoyed it. . . a lot. I told everyone it was better than Get Out and got hit with the “wtf” look lmao. The film stars Samuel L. Jackson, so you really can’t lose.

if you guys go see @kongskullisland make sure you stay through the credits ???

The title speaks for itself. The mythic King Kong is back. Basically, it’s an action film laced with the best humor. This shit is comedy. We literally were cracking up throughout the whole movie. It’s pretty vulgar too, which adds to its greatness. Definitely, peep it in theaters when it comes out (March 9). And stay through the credits.

This was followed by an after party at the rooftop bar for Young Guru. With one elevator going up and down, I watched the line to get upstairs slowly get longer and longer. Shout out to Jay Worthy for letting me cut. It became a party. More free drinks, and even fancier hor ‘d’oeuvres. My boss was going HAM lmao. Sadly, we did not stay too long, but we did catch Guru on the way out to wish him a happy birthday <3.

#24Hrs just made #TyDollaSign the executive producer for his next few projects ???

Shout out to 24Hrs hitting me with this exclusive just now. Inking paper with Ty Dolla $ign. Cannot wait for his new project 24.00.