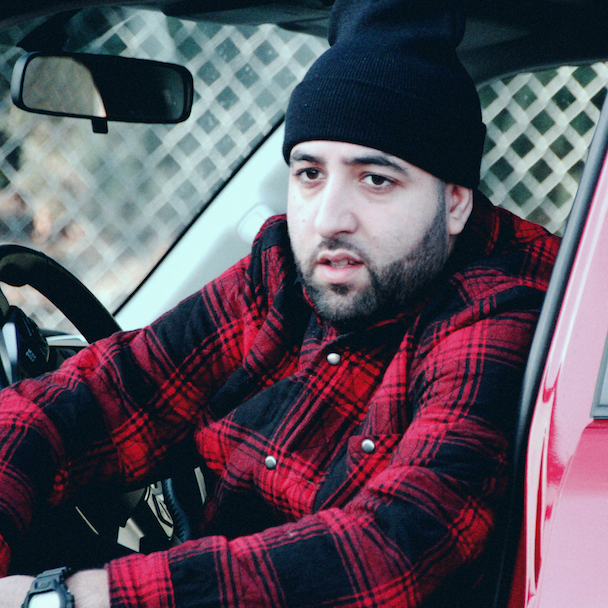 The Sunday afternoon before Christmas on Fairfax couldn’t have been anymore busy. Parking at the cross section of Melrose Blvd and Beverly Ave is damn near impossible. Thankfully, I’m riding around to the nostalgic West Coast vibes of Aktive, the free, 80s R&B gangsta epic by LNDN DRGS. Composed of rapper Jay Worthy and producer Sean House, the project was released in late 2015 by Fool’s Gold Records. It also just happens to be the reason for me being in the area. My issue with finding a parking space subsides when Worthy hits my phone to inform me that he’s found one for me. I make my way onto a side street near Fairfax High School, and Worthy is there, sitting in a crimson red Toyota Tacoma and sporting a large flannel jacket of the same color.  We greet and exchange pounds before getting into an album he describes as something more sonically influenced by something which predates G-Funk.“We just kept the sound of S.O.S. Band, Angela Winbush and real 80s Funk Bands,” Worthy says. “We took those Funk records, looped them and spit gangbanging raps on it.”

“If people like the album, it’s crazy because I’m really just speaking for the hood, but everyone can relate,” he says. Worthy even showed up with his longtime homie Serve On. “Everything he makes is straight for the streets,” says Serve On who met the rapper after spending time in jail. “I thought he was somebody else until I got to know the history, did my homework and came to find out he a cool solid dude.” Aktive is essentially made up of samples that many around Compton grew up around. This album is about the backyard BBQs off Parmelee Ave or cruising down El Segundo. “Active is the lifestyle that we live,” describes Worthy.

Before A-Trak and the Fool’s Gold camp came into play, A$AP Yams lent his assistance before he died early in 2015. “To be honest, for me and Sean, Yams was going to help us out and when he passed, I was sad as fuck,” Worthy said. “We were like what are we going to do with this music? Who else is going to believe in our shit?” Matter of fact, Suge Knight was planning to help on Aktive as well until his current manslaughter charge and incarceration. “Yams and Suge Knight were supposed to sit down,” explains Worthy. “I had them on the phone and all that.”

Their heavy reliance on samples boxes the group’s creative expression more toward free mixtapes. Music like this begs for live instrumentation, something both are fairly aware of. “Yeah we’ve been talking about working with Chromeo alongside Lakeside and Morris Day And The Time,” Worthy says. “Real funk from scratch.” Even if we go that route of making full instrumentation albums, we’re still going to be pumping out free albums of samples.”