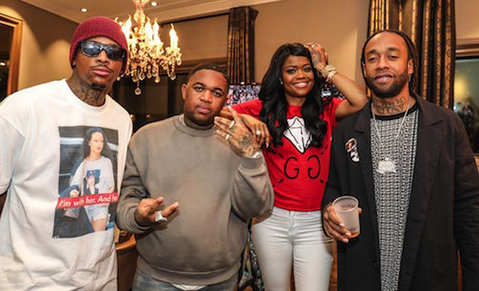 Finally, my opportunity to see #HiddenFences. Just kidding. Hidden Figures. ICYMI, one of the highlights (or lowlights) from The Golden Globes was when the correspondent interviewing Pharrell messed up the film’s name, mixing it up with Fences with Denzel Washington. I’m not going to lie, Pharrell’s face was kind of funny, but then it blew up to something way too serious. People were bashing Hollywood for treating all African American films the same. Calm down. It was a mistake. And it happens to the best of us.

Tonight was the come up. We walked up to the box office at Regal L.A. Live to find out tickets were half off. Say what! They were $8 as opposed to $16. That sure makes up for the $7 parking lot fee. I was honestly ecstatic. It’s the little things. Now it made sense why the movies were a zoo tonight. We decided Tuesdays were the new movie nights. The only difference is you don’t have assigned seats, which I actually prefer.

The films stars Taraji P. Henson, Octavia Spencer, and Janelle Monáe, who all slayed. Honestly, truly. You guys may recognize Taraji from Empire. This time, she plays a genius mathematician. The film showcases three very important women during NASA’s launch of their first successful space missions. This was during a time where racism and feminism were at its peak. These three very intelligent women proved their worth. They did a remarkable job at portraying their journey and obstacles.

We couldn’t get over how beautiful Janelle Monáe was. Did you guys see her on the red carpet at The Golden Globes? She was glowing. Octavia Spencer is just so powerful, in any film she’s in. This is two hours of your time well-spent, I promise. Plus it’s based on a true story. You are learning history!

Tonight was the screening of DJ Mustard’s For Every 12 Hours documentary hosted by Karen Civil. This will be exclusive on Tidal, but we got it two days early. It took place at iPic theaters in Westwood, one of the most luxurious movie theaters that exist. It’s a dine-in theater with leather reclining chairs. Yas.

Shout out to Tidal, they throw the most lit events. Last time, I hit the #TidalxUsher listening party for Usher’s new album. They had the same photo booth tonight, hooking you with three ways to remember the evening: digital, print, and gif. It’s such a smart marketing strategy- the hashtag is posted on every picture. As we go to sit down, I exchanged words with Karrueche Tran getting up. That’s bae.

They took care of us tonight: complimentary drinks, hors d’oeuvres, and popcorn. L.A. was in the building. We ended up in the very front row, which ended up working out beautifully for the Q&A afterward. The documentary was pretty short, I want to say maybe 30 minutes. It was super dope, though. One of the highlights was Mustard talking about how Rihanna called him for the ANTI World Tour and how he had to cancel 15 shows last minute. Shit, I would too.

The doc also highlights how DJ Mustard found his artist Ella Mai and brought her under his wings. He literally discovered her on IG and believed in her talent. She calls him her mentor. If you guys have a chance, definitely peep her track “10,000 Hours.” She’s a sweetheart, and I always have to say hi when I see her out. Last time was at Jhene Aiko show with Red Bull’s #30DaysInLA. Her and Mustard posed for some pictures after the screening. I love how he gave her this opportunity.

Karen Civil asked him what his biggest accomplishment was, and he jokingly said, “Not going broke.” We all laughed. Then he responded with a serious answer, “I just bought my first house.” Congrats. Hearing him speak about growing up with YG and Ty Dolla $ign, who were in attendance, was really sweet. He detailed how he and YG fought, while Ty was the older bro.

Shout out to RJ coming through after the fact. He said he got a flat tire on the way over. I told him how much I loved his “Ridin’ Around” music video with Nip and Mustard. That shit is lit. He got the dopest hair right now. Mr. LA is his name.

There is nothing better in life than work perks. Shout out to my homegirl who works at Warner Bro., she invited me to an exclusive screening of Live By Night. This movie stars Ben Affleck, Sienna Miller, Zoe Saldana, and a cameo from Miguel. He plays a butler and I probably would not have recognized him if my girl didn’t say something. The movie takes place in the Prohibition era. Hello, glorious speakeasy parties.

Employee premiere of Live By Night.

I was told the screening started at 6:30 p.m., which meant I had to haul ass from downtown L.A. Traffic was definitely not my friend. Thank goodness the movie didn’t start until 6:45 p.m. That 15-minute window is beyond clutch for stragglers like me. This was employee premiere, which meant everyone in this theater was somebody. I love it inside. It’s a really clean, spacious theater. No food or drinks on purpose.

Per Rotten Tomatoes, Ben Affleck writes, produces, and stars in this adaptation of Dennis Lehane’s sprawling crime novel centering on the prodigal son of a prominent police chief, and his gradual descent into the criminal underworld.

This is one of those movies where you have to pay attention and follow the story. Not going to lie, I was a little scatterbrained at first. But by the last hour, my eyes were glued to the screen. Ben Affleck kills his role. The movie is full of action (gun shots on fleek), romance, religion, and beautiful cinematography. I wouldn’t surprised if this won some awards.

And Zoe Saldana is just flawless, but we already knew that. I recommend it.

Today was the MLK Community Health Foundation’s “Sharing the Dream” Luncheon at the Dorothy Chandler Pavilion in downtown L.A. I parked in the same parking structure when I saw Amélie the musical, but this time, I had to go all the way to level six underground. It was a definitely a busy, yet exciting day for everyone. The goal of the foundation is to provide philanthropic support to the South Los Angeles community. This meant nothing but good people and positive vibes.

I arrived to find an immense crowd of people dressed in business attire, which we (media) were instructed to dress as well. I was there to cover the red carpet, which featured Courtney Kemp, the creator/show runner of Power. I arrived just in time as she went down the row. Unfortunately, she wasn’t revealing any spoilers for season four, to anyone. She made a joke out of it, but we all gave up when she wasn’t letting anything out of the bag.

Dyan Sublett, the president of the foundation, on the far left.

Everyone that walked the carpet was being honored for something admirable. The group shot above has Dyan Sublett, the current president of the MLK Foundation, on the far left. Courtney Kemp was honored with the Game Changer Award. After the red carpet closed, we stared at the line to the luncheon upstairs, wondering if we could sneak in a plate. We decided to follow the rules. Next time.

Kxng Crooked performing at The Airline in downtown L.A.

Tonight was crazy dope. Kxng Crooked (Crooked I) was playing at The Airliner in downtown L.A. Shout out to Matt for plugging us with tickets. Crooked is the homie. He came through the office for a #DXLive to spit some real Hip Hop for us. If you guys aren’t familiar, he was part of Slaughterhouse, one of the illest Hip Hop groups to date. He actually took the time to shout out each member tonight. It was actually a good refresher for me lmao.

By the way, Crooked is from Long Beach. He reps the West Coast. This was a fucking real Hip Hop show. We were informed he wasn’t on until after midnight, but he didn’t take the stage until maybe 1:15 a.m. This venue was small af. I couldn’t help but wonder why it was so empty until we found out there was an upstairs with two more stages. Literally, if no one told me, I would have stayed downstairs the entire time and missed Crook’s set. Smh.

.@CrookedIntriago calling @Eminem one of the greatest rappers. ? pic.twitter.com/9gWAN9oDFv

We saw many, many acts before Crook came on. I was the rare female, along with my girl and a few others. The crowd was dispersed among the three stages, but they huddled over for Kxng Crooked’s set (I hate when rappers change their names). I loved that he shouted out Eminem, that’s my favorite rapper for sure. One of my favorite songs he performed was “I Hear Voices” with Statik Selektah. That track is so smooth. I love the keys on the beat.

This was hilarious. Crooked completely shoots down Jhene Aiko’s “Eat the booty like groceries” line. You won’t catch him listening to the radio. I think every fan in the building tonight could relate. He only played for like 30 minutes. I thought it was hilarious he lit a cigar while he was spitting. I feel like that would make breathing harder.

KXNG Crooked merch along with his Good Vs. Evil album.
We were posted at the merch table afterward. Luckily, Crooked came our way, so I got to say what’s up after the show. Our homeboy was stoked to get a picture. He literally almost named his dog Crooked. I thought that was adorable.