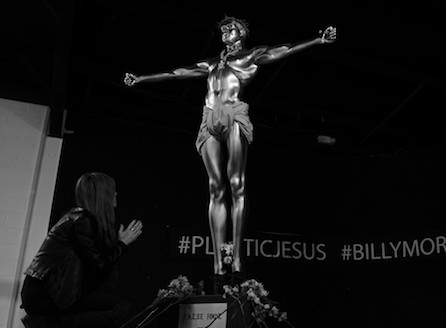 When he first moved to L.A. (about 10 years ago now), London-native Plastic Jesus saw people driving around in their cars with those plastic Jesus figures. On February 25, HipHopDX caught up with the artist at his Anesthesia: The Art of Oblivion art show on Gibson Brands Sunset (former Tower Records).

By the way, this piece is for sale and he’s looking for $50,000 for it. According to the street artist, he wanted to make an ironic statement before last weekend’s Academy Awards.

He states, “I thought it was ironic, the fact that if you’re really religious, do you really need a cheap, Chinese-made figure to remind you who your God is?” It fits well because he tries to get people to question their morals and beliefs, which is exactly what these figures do.

This seems to be the theme when it comes to the infamous Kanye Jesus statue, spotted in the heart of Hollywood. After creating statues for about four years now, the concept of this piece came to him about a year ago.

“I wanted to focus on the cult of idols and how we build them up into gods, and also how we break them down. In this case, how we crucify them,” he shares.

"False Idol". #art #streetart #oscars with generous help from @pverik and sculpture @morgothlot #kanyewest #hollywood the statue will be on Hollywood Blvd for some time today. And then at our show Saturday. At Gibson bands 8801 sunset Blvd . The former tower records store.

“We can all remember when Kanye West was hospitalized at the end of last year, right?” Plastic Jesus explains, “The time before Christmas when ‘Ye was hospitalized really underlined that fact that we build these idols up into gods, and when they show human failings, we then turn them down or crucify them.”

The entire process of creating the sculpture, from concept to execution, took about three months. The head was molded by an artist named Ginger from Las Vegas, who is responsible for the naked Donald Trump statue. The actual construction took about six weeks.

“The title ‘False Idol’ is a criticism of us, the consumer, and us, the media — building people into gods,” Plastic Jesus continues to explain. “Sure, Kanye is hugely talented. He’s a genius when it comes to writing and production, but we’ve built him into something which is far greater than that. And when we build people up like that comes expectations. And when people don’t meet those expectations, that’s when we start to crucify them.”

Plastic Jesus emphasizes the attention to detail in street art. By the way, the Yeezys on the statue’s feet are fake.

“They came from China,” he reveals, “and cost about 15 dollars including shipping.”