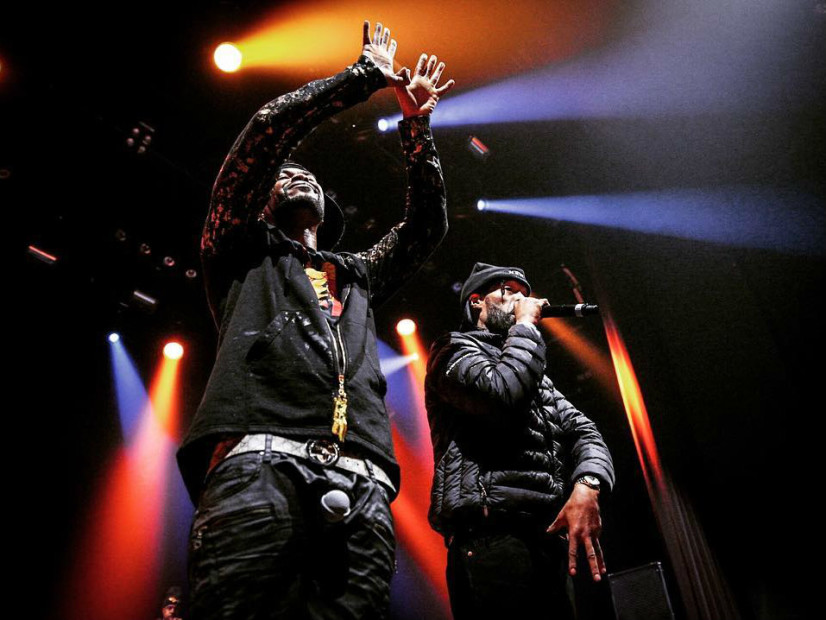 Tonight was the long-awaited Warriors vs Clippers game at Staples Center. Guys, this is my team. My life. Nothing hits home harder than repping the #DubNation. I was truly blessed and honestly speechless when V surprised me with tickets for my birthday/Christmas. I almost cried.

This game was completely sold out. Literally, no empty seats. We finessed the PR section for the first half until we got booted. All good, though. I was just so happy (truly) to be there. I was rocking a Warriors hoodie with pride, while V rocked her KD jacket. It’s still so weird seeing Kevin Durant in a Dubs jersey. But so great at the same time.

Steph, Klay, Iguodala, everyone slayed tonight. But so did Blake Griffin lmao. There was one play where he dunked on us and had everyone at Staples “OOOUUU”-ing. I honestly felt bad for the Clippers ’cause their match-up at Oracle Arena was a complete blowout. This one wasn’t so bad, but you know we took the W.

.@BigSean #IDecided is so fire. that track with @Jeremih is everything. ??

I needed gas before our next destination, so we decided to stream Big Sean’s I Decided. Holy shit. It’s so fire. That track with Jeremih had us literally dying (we love Jeremih).

The Juice TONIGHT! Get your ticket now! There are only a few left! ?: @RegentTheaterLA ⏰: 8PM ?: Link in bio #cameforthejuice

This next event was just as lit as our night thus far. It’s called The Juice, thrown by Good Sport Creative and Koreatown. These parties are nothing short of good music, good company, and good vibes. This time, they were doing it big. THEY. was on the lineup, as opposed to just DJs spinning the entire night. It was held at The Regent downtown, a spacious venue where I last saw DeJ Loaf during the Red Bull Sound Select #30DaysInLA concert series.

It was a party the minute we walked through the doors. The DJ was throwing down all the classic throwbacks, along with some of my favorite bay slaps (“Big Tymin” by Nef The Pharaoh). Shout out to Drew, the man behind these events. The last one I attended was Eggs Over The Neptune at Lock & Key. I was sold then.

Tonight was significantly larger. This was one of those events you pull up to with your homies and just gig all night. No judgment, and no worries. Also shout out to Code Green in the building, along with all the familiar faces I saw tonight.

Tonight was one for the books. I am so blown away by this Method Man and Redman show. I had no expectations. I walk into a packed house at The NOVO at L.A. Live and immediately notice the thick fog of marijuana. If you guys aren’t aware, Method Man is a member of the Wu-Tang Clan. This meant all the Hip Hop heads were in attendance.

my girl just pushed us all the way to the front at this @methodman @therealredman show lmao ??

I brought my homegirl who was actually in one of Redman’s music videos. She said he was one of the nicest artists she’s met. We were in the pit and she pushed us all the way to the front. Shout out to her, I fucking loved being so close to the stage. I was part of the crowd tonight, which was the greatest experience. We had our hands up the entire time. When I say this is the most G rap show I’ve been to, I’m not playing. In that moment, I understood why the old school rappers were hating on the new school rappers. It all made sense tonight. . .

just hit the blunt @methodman passed into the crowd.

Between throwing water and champagne into the crowd, in which we took cover, the girl beside us was handed the blunt from Method Man himself. You know I had to hit it. Shit got real after that. After performing “How High,” they performed “How High (Part II)” with Toni Braxton. That song is so fire. They took the time to ask the crowd who’s seen their stoner movie, How High, at which point they bring out Al Shearer aka I Need Money. Oh yeah, they announced a How High 2 is coming. They been saying that, though.

When I say these two put on a good show, I truly mean it. They give the people their money’s worth. It was all 90s Hip Hop tonight. They dedicated a good portion to letting DJ Dice spin on the turntables. He was so lit. He was doing tricks like putting his shirt over his head and spinning with his mouth. Unreal.

.@methodman just passed his microphone-shaped pipe into the crowd ??

I was laughing at the microphone-shaped pipe Method was smoking on stage. Next thing I know, it’s being passed to me. At this point, the DJ throws down “The Message” by Dr. Dre. Did I mention I loved being in the crowd tonight? Fuck backstage, this was the only way to do it. The entire night, Method and Redman were encouraging the people to get as hyped as possible. Everything about their energy was right.

Being so brainwashed by the new wave of rappers, this really made me appreciate Hip Hop for what it was, and what it came from. They definitely talked shit about the mumble rappers during their set, but hey, I get it. These guys are from the East Coast, but they showed the West Coast so much damn love tonight. They took a poll to see who smoked more weed: Colorado or Cali. You know we won.

I know they told us not to record, but I had to lmao. Smh. It’s for work, Method Man. Do I get a pass? They also shouted out Page Kennedy who was posted on stage right behind them. Meth & Red saluted him for putting on for the art of emceeing. The crowd responded with an uproar when they asked, “Who loves lyrics?”

Bringing out RZA to the stage was definitely a highlight of the evening. The show concluded with some Wu-Tang classics along with a tribute to all those who couldn’t make the show. The long list ended with Ol’ Dirty Bastard.

Today started off with an advanced screening of The Lego Batman Movie, bright and early. Huge shout out to Darron, he’s the plug forreal. This movie doesn’t come out until next week. We had to be at Regal L.A. Live at 10:30 a.m. No excuses. It was definitely worth the sacrifice. The best part: walking up to a long line full of kids (with their parents, of course). Many were dressed up in Batman gear. It was adorable.

If you guys saw the last Lego Movie, you would have been as hyped for this as I was. That shit was fire. So creative, so cute, so well-made. This was the Batman version. I was literally singing the theme song in excitement. The film is completely is a 3D computer-animated adventure/comedy. I couldn’t tell if this was one of those cartoon movies made for adults, but the little kids were loving it. You know I was right there with them. Every little joke and little detail, such as the outfits on these Lego characters, were so strategic and well thought out. 10 out of 10.

Tonight was Belly and Juicy J’s #RBBTour at The Hollywood Palladium. I was excited to take my girl who’s never been to this venue. It’s definitely a trademark in L.A. I was wondering what #RBB stood for until I found out it was the name of Juicy J’s new project, Rubba Band Business. Had no idea homeboy was still making music lmao.

I really came tonight to catch Belly’s set. Special thanks to Jennifer with Republic Records for the tickets, along with updates on Belly’s set times. It’s like she knew how much set times meant to me. I think I’ve told you guys before, but I’ve been a day one Belly fan. Before he blew up. His Up For Days mixtape was fire, home to “Might Not” with The Weeknd before it hit the radio. . .

Man, what I witnessed during his performance of that track tonight was so sad lmao. I swear I’m not the only one who loves that verse. He would hold the mic to the crowd to fill in some lines. I swear it was like cricket, cricket. I got you Belly. Other hits he performed include “Money Go” featuring Travis Scott, “White Girls” also featuring La Flame, “Bounce Back,” “Consuela,” “Zanzibar,” and “Ballerina.”

Juicy J came on stage looking like a straight disco ball lmao. This dude definitely has a long roster of hits, all of which he performed tonight. It was a trip down memory lane. “A Zip and a Double Cup” was definitely my turn up song. Man, this was the most ratchet show I’ve been to in a minute. No lie. We were surrounded by couples freaking (high school style) and making out, and everyone stepping all over everyone. It was a lot. I couldn’t deal.

After announcing his own strain of weed called Green Suicide (how fitting), Juicy J announces this tour was made for all the weed smokers. Project Pat came back out to perform Juicy’s new track off Rubba Band Business called “Feed The Streets,” produced by Metro Boomin. That caught our attention. If Young Metro don’t trust you. . .

Who remembers Three 6 Mafia? “Still Fly” was the anthem.

man juicy j got 0 substance to his lyrics lmao ?

I hate to be negative, but there was a point in the show where I was just like wow. Juicy J really still be rapping about Xanax and strippers. Come on now lmao. Legit got disgusted at one point. Smh. On a positive note, he changed outfits mid-set into a Versace robe. It was so him.

It’s always a party whenever Wiz Khalifa shows up. A smoke party, to be exact. He literally comes out puffing on his trademark paper planes in a white fur coat and white shades. They played “All Night,” a track made for Vegas. The show ended with Juicy J forming a mosh pit so he could jump in. Yeah, we stayed back.