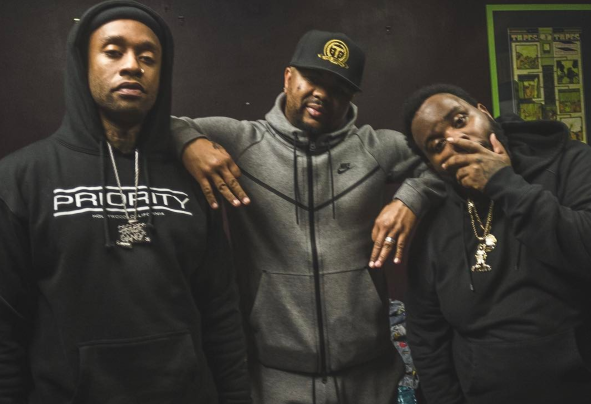 Unlocking The Mystery That Is 24Hrs

It’s a rare (pouring) rainy day in Los Angeles, where residents were either afraid to get wet or get on the road. That didn’t stop anyone with plans to see The-Dream on his Love You To Death tour. 24Hrs was opening for one of R&B’s greats.

Thanks #24hrs for chopping it up with us before #TheDream show tonight ??????

Apparently, it was a last minute decision. How’d he land on the bill? 24Hrs new track “VSVSVS” goes… “She know I’m doing my thang/ Alexander McQueen/ She said I sound like The-Dream/ That’s how it’s supposed to be.” He tweeted The-Dream, and it turns out they have the same management team. Twenty was the first one to open for The Dream on his tour.

Twenty was sitting in a barber chair getting his fade cleaned up, with his brother MadeinTYO by his side. He voiced his concerned about the rain, but that did not stop his fans from coming early to see his set. The best part was the special guest appearance by Ty Dolla $ign, who came out just to support. Real recognize real.

HipHopDX: You used to go by Royce Rizzy, tell us about the name change.

24Hrs: “Shit, I think it was more than a name change. It was just an overall change- mind, body, soul. A birth of a whole new artist.”

DX: Where did this come from? Where was the inspiration behind this?

24Hrs: “The name or the actual music? The music I was already doing as Rizzy. I was already entertaining like singing, but just like lowkey. Not really serious about it. I was doing major trap records.

One day I was with my bro Tokyo in New York, and I don’t know. I was with Tokyo’s DJ, Jeh-Mahk, I gave him some records and he accidentally sped them up in Serato, and it sounded like me, like Twenty. We were like, “this shit is wavy. Let’s just put it out tonight.” We put it out and in less than a week, @40oz_VAN was tweeting about it, YesJulz was Snapchat-ing to it, it was just picking up and becoming something. . . fast. So I was like, you know what. I might as well fucking transition.”

DX: You like to remain mysterious and just focus on music. Are you still going strong with that?

24Hrs: “I mean everyone know who I am know. I used that tactic before I revealed that was me. Now I’m doing shows. You see where I’m at tonight and tomorrow. My creativity is on a whole nother level than what it was before.”

DX: Did you find it hard building a following with this whole new persona?

DX: How would you describe your new sound? It’s a lot of that baby-making R&B.

‘You go right in my playlist with PARTYNEXTDOOR, 6lack, or Amir Obe,’ or any of them stars. Shit man, it’s cool. Females buy music and support. Watch how many females about to be out here to see The-Dream tonight.”

DX: Your recent music video for “You Know,” is this to a certain somebody?

DX: Speaking of your Open Late Tour, can you tell us about this Asian theme?

24Hrs: “You know, I grew up. . . I did a lot of my years in Japan. I lived in Japan, that’s why my brother’s name is MadeinTYO. We lived over there. That’s just always been the vibe: neon signs, things open 24 hours. I remember being like 17-years-old in Tokyo at like four in the morning, and everything is still open. So, Open Late. That’s the name of my album.”

24Hrs: “It’s family, so it ain’t even work. It’s just having fun. My brother’s came a long way since he first came out last year, to having a Platinum record, two Platinum records. “Uber’s” about to be double Platinum. It’s crazy. He just released the “Skateboard P” video with Sean. He’s going on tour with Big Sean. He’s flourishing, and winning. And making a lot of money.

DX: Ty Dolla $ign is someone who has reached mainstream status. Is this something you hope for one day?

Because I care about people, my shit not tripping off like fame. My shit is tripping off seeing other people win. That’s what I care about. If Tyo gets a Platinum plaque, and he was talking to me months… years before his Platinum plaques, like “I really wanna do music,” and he succeeds. That’s a plus to me. If Private Club Records is the hardest collective next year, that’s a plus.

The ultimate thing for us as artists is for people to really relate to your music and for you to touch somebody with your music. If it’s in a happy way, if it’s in one of those ways when you in the club, and the song drops, and Nelly’s “Hot in Herre” drops and everybody goes “Ohhh.” At that moment, he moved you. He made you have fun at that moment. If my music is that music, then I’m glad I make you feel a way somehow.

DX: Were you nervous at all, debuting yourself in front of all your fans?

24Hrs: “My first night. I’ll never forget it. I was Burberry head to toe. My glasses was Burberry, the polo was Burberry, the tracksuit was Burberry, and the shoes was Vans. Because I wanted to offset it. I was in L.A. at The Roxy. I was sitting behind the curtain and I was like ‘Fuck. Everybody’s in here. This shit is sold out. I can either do good, or not do good.’ From the time the curtains rolled up. . . everybody was screaming. And I was like, ‘Alright, it’s go time.’ And then Wiz came out, Tyo came out, SuperDuperKyle came out. It was crazy.”

DX: What’s it like working with Murda Beatz, singing over beats that rappers are making all the turn-up tracks to?

24Hrs: “Murda is crazy. I’ma tell you something. One, Murda is really on his shit. Me and Murda known each other since my Rizzy days. Murda’s really winning right now. He’s succeeding. He’s just growing: a few of the Drake records, Migos, PARTYNEXTDOOR. Me and him, he hit me one day and was like ‘Let’s do the joint tape.” And I’m like, “Aw shit, I don’t got time to be honest. I gotta go to Vegas with Gotti.’ He was like, ‘We could do it in one day.’

We literally went to GOOD Music. Me and Murda did four songs, in one day. Murda was on the lean, I was doing the records. [laughs] We killed that shit. ‘Gucci Flame’ might be one of my biggest songs.”

24Hrs: “Probably Drake. Other than that, not really. Drake is the leader of this shit. Drake in an area by himself. He sits in a cloud by himself. For our time, and for our generation. . . I shoot for the stores. if I had to pick one person and that was it: honestly, lowkey, it would be Drake.”