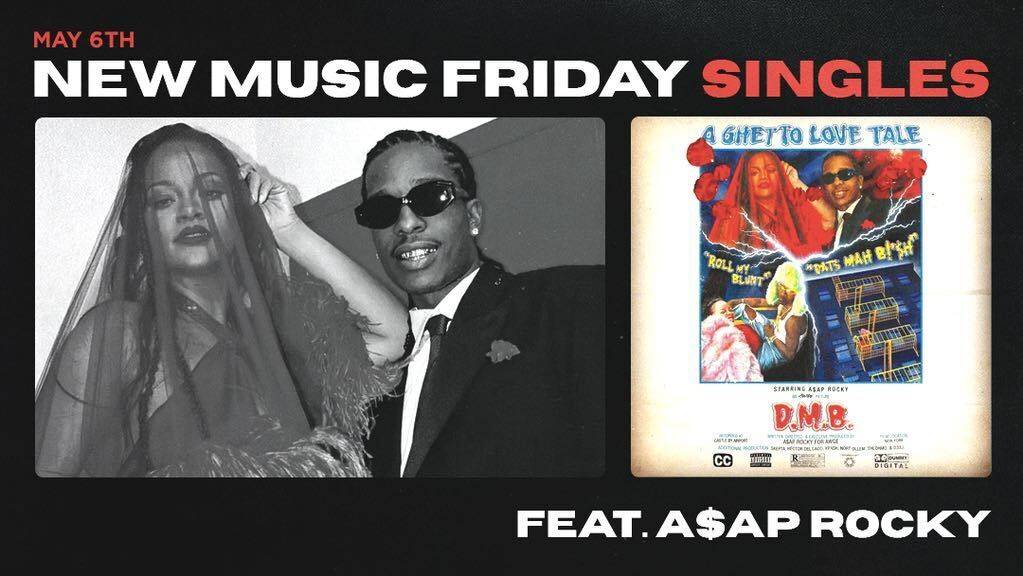 As the summer season continues to creep up, new heat is dropping each week in HipHopDX’s New Music Friday Singles roundup.

The latest edition of our pre-weekend singles coverage is packed with internet-breaking releases such as ASAP Rocky’s Rihanna-inspired cuffing-season anthem. There are also several collaborations between artists such as Logic and Russ, Mozzy and Shordie Shordie, Stunna4Vegas and Icewear Vezzo and more.

Check out the full list of releases that dropped on Friday (May 6), below.

Though multiple reports allege A$AP Rocky and the soon-to-be mother of his first child, Rihanna, aren’t engaged, it’s obviously not stopping Pretty Flacko Jodye from claiming his queen all for himself.

Inspired by the love he shares for RiRi, Rocky details all the things he loves about his women in the music video to his “D.M.B.” single.

Fresh off curving Jack Harlow during his own Instagram Live session, Doja Cat is back on the prowl with a new banger.

While it seems as though listeners of TDE artist SiR have been searching for new music since the West Coast R&B savant dropped his acclaimed Chasing Summer album in 2019, the good news is he has been fairly active as of late.

On the heels of the release of his “Common Sense” collaboration with his Grammy Award-winning brother D. Smoke, SiR delivers his “Satisfaction” effort.

It’s clear that both Logic and Russ are dedicated to providing themselves and their fans with an opportunity to reflect on life through the lens of music.

With Russ in the midst of building his “artist-friendly” Diemon record label and Logic set to hit the road with Wiz Khalifa for their Vinyl Verse summer tour, the pair of elite lyricists connect and compound their dope influence on their “Therapy Music” collaboration.

The biggest highlight of 2022 so far for former DX Rising Star Toosii has been the news of his child with his longtime girlfriend.

And after starting the year out on his feature wave, assisting with releases from 3Breezy and Millie Go Lightly, the Platinum Heart rapper continues the start of a new chapter of life with his “Keeper” ballad.

OVO Sound vocalist Roy Woods appears to be on a roll and bending genres as he goes.

After delivering his fast-paced “Speeding” single with DJ Charlie B, the reclusive crooner drops off his new bop “Insecure” which of course, has nothing to do with Issa Rae or her hit show — but it’s still fire.

Mozzy isn’t wasting any time putting on for his new CMG imprint following his “Chaining Day” with Yo Gotti and EST Gee.

With the help of DMV rapper Shordie Shordie, Mozzy forces his ops to “Tell The Truth” while also divulging details about his Hell Gang lifestyle.

DaBaby’s Billion Dollar Baby Entertainment signee Stunna 4 Vegas has been popping off all year, thus far delivering new singles including his “Pay Me To Speak” banger.

Maintaining the pressure he’s been applying most recently, the Rich Youngin rapper joins forces with Detroit lyricist Icewear Vezzo for their “BMF” collaboration — which also has nothing to do with 50 Cent’s STARZ TV series.

Atlanta artist Lil Gnar is just getting started with his 2022 moves, following his viral moment in January when he claimed Future is better than 2Pac.

Keeping his foot on the gas pedal as the smoke clears from the release of his “No Switches” collab with Tory Lanez, the Gnarcotic clothing designer links up with Yung Bans to deliver their “My Bruddas” anthem.

Even though Jack Harlow earned the Billboard chart-topping spot with his “First Class” single, former SOB X RBE member DaBoii was the first rapper to sample a Gwen Stefani track in 2022.

Now, the Bay Area MC is helping keep the memory of deceased rapper Drakeo The Rule alive with his single “The Deal” which features a posthumous guest verse from the Los Angeles native.

Lucki is on a different creative planet right now.

After starting the year off with a trio of singles, including his “Meet Me There” release, Lucki salutes to the “Good Memories” on his newest drop.

Now that Carson rapper Jayson Cash has inked his deal with Atlantic records, the sky is the limit.

So it’s only right that he link up with West Coast veteran Dom Kennedy to show the world why he’s “Him” and not “They,” per the words of DJ Khaled.

Proving his tactical toughness on his war-ready “Me & My Weapon” single, the Washington D.C.-based rapper doubles down on his brash image with his “Tip Toe” banger.

Michigan-bred rap upstart Ike Rhein is methodically carving out a lane of his own with each of his cinematic releases.

The 19-year-old rapper’s “Violin” music video falls in line with his exceptional visuals as of late and is complete with a twisted street-inspired Bonnie and Clyde mirroring storyline.

Most Certainly – “I Bet”

Sometimes, the safest wager to put money on is one that forces the gambler to beat the odds themselves.

Following his “Real Rich” collaboration with Lil Durk, Most Certainly is putting his squad on his back in his “I Bet” visual.

With a sound that casts the same sort of ominous and mysterious aura of a city blanketed with the darkness of the midnight hour, newcomer Pharaoh London is far from the typical rap protagonist.

On the heels of his “Platinum Freestyle” release, Pharaoh London leans into his lyrical antihero archetype on “Say Something.”

Don’t forget to check out this week’s Honorable Mentions nominees, which include artists such as Yxng K.A and B-Lovee, Alex Vaughn, Badda, Ron Suno and DJ Drama, Kaycyy and 10Percent. There are also several highlights in this week’s New Music Friday Albums coverage, which includes new releases from Jack Harlow, IDK and Kaytranada Lil Gotit and more.