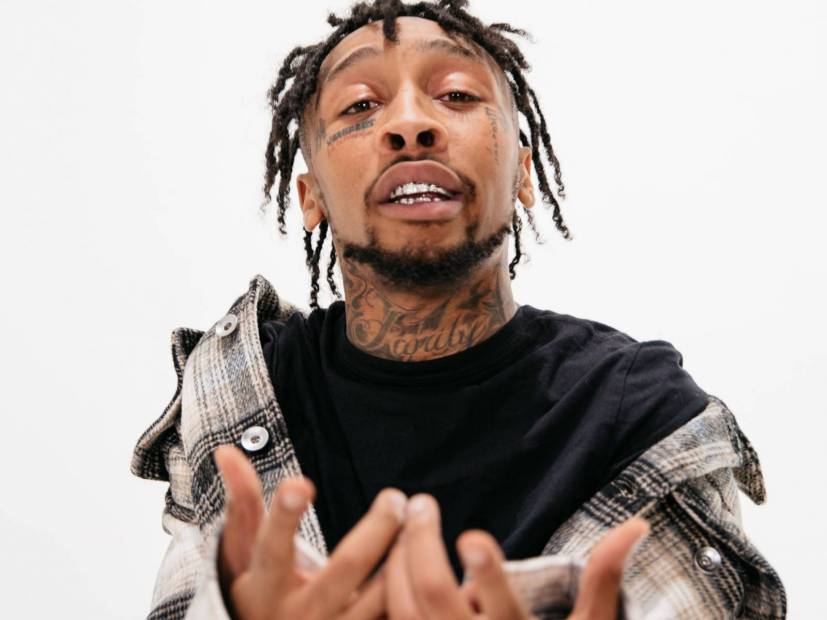 Baltimore, MA – Before Shordie Shordie was a solo artist, he was a member of the three-man Baltimore rap group Peso Da Mafia (circa 2017-2018). During his time with the group, he earned his nickname, Captain Hook, after it was bestowed upon him for his gift with crafting neck-snapping hooks. Tracks like “TSAY” and “Moneyman” were early showcases for Shordie Shordie’s impressive hooks that are consistently busting at the seams with infectious cadences and homegrown melodies.

By December of 2018, Shordie Shordie moved on from Peso Da Mafia and delivered his debut solo project Captain Hook. The short nine-track project featured a uniquely robust take on songwriting, improvised vocalization and of course, stark, yet relatable, messages about women, jugging and weed.

The release of Captain Hook was the culmination of perfect patience and preparation aligning with precise timing and opportunity. Long eclipsed by the mutual limelight of the group, seemingly pigeonholed as the hook guy, Shordie Shordie finally had the opportunity to show the world he could indeed make songs on his own — great ones at that. And thus, the tale of the rise of his hit track “Bitchuary (Betchua)” blossomed. Since the release of the official music video for the track on December 27, it has accumulated nearly 23 million views on YouTube, along with receiving countless streams and co-signs from reputable artists like DJ Carnage and Wiz Khalifa.

“Bitchuary” recently materialized Shordie Shordie’s debut chart birth, edging in at No. 48 on the Billboard Hot HipHip/R&B Songs charts — making his transition to a solo artist full circle. HipHopDX caught up with the brazen rapper just before he heads out on the Captain Hook tour to tap him for his come-up story and discuss the magic behind the track “Bitchuary” and his music at large.

HipHopDX: How did you get started making music? Were you always so drawn to creating melodic and cadence driven flows?

Shordie Shordie: I started making music coming out of high school, feel me. I really ain’t have nothing to do so I just started doing music and harmonizing at the park and shit while we was trapping and on the block and shit. I use to make like, little harmonies and shit and niggas used to like it. And so after that, my older brother started giving me paper towards the studio. I started working that out and I kept doing it. My first time getting paid, it was like $2500 in 15-minutes. I ain’t never did none of that ever in my life. So it kind of changed my whole wave right. It only took like a couple of little wrong situations I did in the streets and caught couple charges and seen a couple dollars I had made in a fast amount of time and I mean, I ran with it. It really wasn’t like a long thing to it — how I come up with my music is a whole other thing. I think about females. Bitches and smoking weed is my shit (laughs out loud.) I’m riding in my city right now bro on my way to a trick (laughter continues.)

HipHopDX: Women and smoking weed do provide vibes. You have said in the past that your music is all about vibes and relatability. How does that factor into your process?

Shordie Shordie: I rap my shit bro. I rap my shit bro, and how I look at it, it’s painful bro. Everybody goes through a lot of the same emotions, you feel me. So I found one emotion that I gravitate to is pain, you feel me. And I kind of know how to flip it I guess and I just channel it into different energy. I’m good with channeling my energy, and all that pain into a great song or a good cadence or — it really depends on whatever type of beat, it really doesn’t matter for real. Whatever type of beat I get on I’m going to get on for real, and that’s what I work with.

HipHopDX: Speaking of beats, I wanted to talk to you about your relationship with YG Beats, the producer of “Bitchuary” and a few other tracks from your Captain Hook project. What it is like to see the world really embracing the vibes you two created together in such a big way?

HipHopDX: That’s really dope, the chemistry comes through the music for sure. I also wanted to ask you about your songwriting and use “Bitchuary” as an example because it doesn’t really use the traditional composition. Was that on purpose? Do you like being organic and creative with your songwriting?

HipHopDX: I wanted to talk about that too. Your cadence and melodies give your music this infectious bounce. I can especially hear it on tracks like “Voicemail” and “Focused.” Is this something you like to incorporate in your songwriting? Is it a Baltimore thing? Or is it just you doing your thing?

Shordie Shordie: That’s me, yeah that’s me. All my producers they gone sit in front of me — the majority of them beats are made in front of me, you feel me. So that’s me, that’s me telling them, ‘yo, go take this off of there, put that on there, you feel me, make it sound like this or make it sound like that, you feel me, and then I go along with the beat. So that’s me and my producers, I’m not going to take all the credit. Like, we got we got that good ass chemistry to the point where, if I want something done how I want it done, all I gotta give them really is the melody — and once the melody is done it’s just over, you know. Set in stone.

HipHopDX: In a recent interview you commented about moving on from Peso Da Mafia and said, “People never heard me finish the story, and I think it’s proving people wrong, that I can actually do music,” and I wanted to ask how your time with the group helped prepare you for your solo career?

Shordie Shordie: It just made me challenge myself, I challenge myself even more than what I was doing. Like I said before, I never really finished a song, I always came in da hook or verse and then the end of the song, I would end it. I’ve made half a song or a feature song that was great, you feel me. Now, it’s to a different point to where, I gotta step my game up and I gotta challenge myself like, can you make a song? Will you make a song? I’m hard on myself. And it’s a good thing sometimes, sometimes it’s a bad thing, you know. Because sometimes I’ll like lose myself, I’ll stretch myself out a little bit, or tend to smoke a little bit too much weed that I was not supposed to smoke(laughing). I’m hard on myself and I feel like as an artist you gotta be hard on yourself. If you not challenging yourself to be like the next level, or at the next level or try to do some next level shit, then what are you doing? You might as well just make the one song and feel comfortable. Me, I’m not comfortable making one song. I’m comfortable with being a legendary artist, I want to be just like the idols that I look up to, and the legendary artists and that can go for years.  So just trying to have that mindset and do the same thing, I just want to go further.

HipHopDX: How has the response to the music you have been receiving influenced, inspired or changed what you do? Or are you still in Shordie’s world?

Shordie Shordie: Yeah I’m moving in Shordie’s world right now. I’m going to be as humble as I got here — the same way I got here bro, the same way I got all these fans is the same way I’m going to get the next 10,000 fans, feel me. I’m not gone change anything, if anything, I’m going to perfect. People don’t look at that coming from me, and I don’t really trip, but at the same time, perfection, that’s all I’m looking forward to doing, is perfecting. Perfection is something that people can hold on to. Of course, they’ll hold on to the music, but, if your music just sounds the same the whole time, you just gonna be one of the sounds the same artists. I don’t want to be one of the sounds the same artists, I want to be different bruh. I want to be Shordie Shordie.

Shordie Shordie: I had my son bro. And before I had my son I was shot twice and then shot at when I had my son, and then after that bro, it just brightens you up when you coming from a dark place, you feel me. My leverage for leaving the streets was the scales of the streets versus the music. The music out-weighed what the fuck I was doing in the streets. I was trying to save up $2,500 in two weeks when I made $2,500 in 15-minutes. So it was like a life thing — you know how people say life or death? It wasn’t really a life or death thing because I didn’t even really see myself dying bro, and that’s the crazy part. I was looking at it like, ‘damn I’m getting shot all these times’ and I ain’t see myself dying, but the thing was, do you want to live like this forever? I want to live forever, and I want to live forever on some comfortable cool shit, you feel me, like regular people bruh. Not street regular people, nah, regular people, that work nine to five’s, you feel me. I live like them, I get on planes, I do all that shit, you feel me — I do shit niggas don’t do from my city. A lot of people haven’t been out of the neighborhood and their neighborhood only two or three blocks. It was a life thing. So I just chose some righteous shit to do.

HipHopDX: You have a tour starting on July 17th in New York. What do you want people to take away from your live performances?

HipHopDX: Is there going to be a “Bitchuary” remix?

Shordie Shordie: Yeah, I’m going to let it breathe but I got my nigga Wiz Khalifa and A Boogie Wit Da Hoodie on there man, so yeah. Shout out to HipHopDX and let them know, like, put this in bold, you gotta put this in bold letters man. My nigga Wiz Khalifa and A Boogie on the remix, we gone rock out and then I got some more music coming, you know — I ain’t no one-hit-wonder and I’m going to definitely prove that.

Be sure to keep up with the Captain Hook tour and follow Shordie Shordie on Instagram here.

Peep the tour dates below.