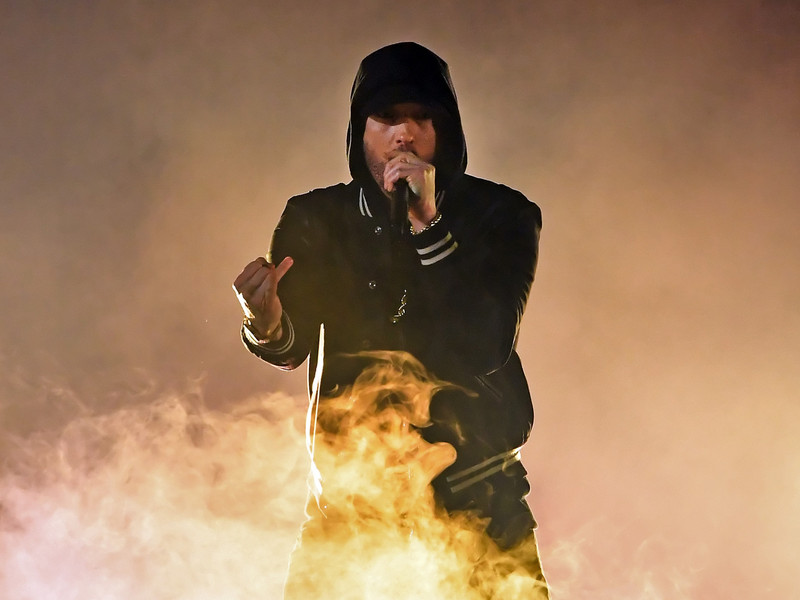 HipHopDX – This week in Hip Hop, Eminem surprised fans with his new album Kamikaze. Also, Lil Pump was arrested in Miami but was so proud of his mugshot that he shared it on Instagram. Lastly, Cardi B cleared the air on her controversial Instagram live video.

Tried not 2 overthink this 1… enjoy. ? #KAMIKAZE Out Now – Link In Bio

Eminem released Revival at the end of 2017, so few expected to hear a new album from anytime soon. That changed this week when he decided to release Kamikaze. The surprise LP is filled with swipes at a lot of people who criticized Revival.

Aside from Tyler The Creator, Lil Yachty and a plethora of other rappers), Em also calls out Charlamagne Tha God and Lil Pump. They both took the time to react to their respective disses.

After hearing the song, Charlamagne explained on The Breakfast Club that Eminem knows Revival wasn’t great.

One person not mad at Eminem’s acknowledgment is Hopsin. He posted a video of himself freaking out over the man who inspired him name-dropping him in song. Hop said he’s going to celebrate by calling his mom.

Machine Gun Kelly had a similar reaction despite getting dissed, except he celebrated with a bottle of champagne.

Another notable reaciton to Slim Shady’s surprise release was LeBron James proclaiming Kamikaze is fire … and if you don’t agree, you’re just hating.

Lil Pump was arrested in Miami on Wednesday (August 29) for driving a white Rolls Royce without a driver’s license.

After bailing out, he posted his grinning mughsot and announced his forthcoming album Harverd Dropout would drop on September 14.

Cardi B Denies Offset Fingered Her On Social Media

Drumma Boy and HipHopDX’s Editor-In-Chief Trent Clark shared a meal together at Comfort LA, and the seasoned producer talks about how working with Young Jeezy gave him his first platinum plaque.

“That was my first platinum plaque,” Drumma Boy says of “Standing Ovation” off Let’s Get It: Thug Motivation 101 . “It allowed me to get on my feet and get my first publishing deal. It allowed me to establish my first home and build my first studio.”

Wild N’ Out star Rip Michaels spoke with DX about his upcoming sketch series, which features Cardi B in a skit titled “Hoe Etiquette.” The series has already come under fire for offending Martin Luther King’s family, but he’s pushing forward.

“When you see Cardi B do these sketches, you’re going to lose your mind,” he says. “Cardi B has this one character, where she gives what she calls ‘Hoe Etiquette,’ and it’s all about the proper way of being a hoe. And only Cardi B can explain something like that.”

Buddy released an incredible debut album, Harlan & Alondra, and DX’s Justin Ivey got the opportunity to speak with him about developing the sound of the project with Mike & Keys and Brody Brown.

“Well, I’ve been working with Mike & Keys for years now,” he says. “Brody, I just started working with him during the album, but he’s always been a close friend. He’s always been super busy working with a bunch of other people, doing his own thing, but finally got an opportunity to work with him and it’s been amazing, with everybody.

“We had a bunch of instruments, and they would just play random sets and jam out together. I would just rap and sing on top of free, instrumental, jazzy vibes, and then we would add a bunch of post-production sessions with just like hours of jam sessions. And we would just sift through them and pick the best parts and make them into full songs.”

Ty Dolla Sign is having an incredible year and has been featured on a lot of people’s projects including Beyonce and JAY-Z’s joint album Everything Is Love and explains how he got to be part of that project.

“We did [“BOSS”] like two years ago,” he said. “It was supposed to come out on Lemonade, but I guess they had a better plan. At first, JAY-Z wasn’t even on it, but then JAY-Z got on it and took it to the next level. I’m super excited about that joint and I’m just glad people love it.”

DJ Jazzy Jeff held his annual Playlist Retreat and among the many topics he tackles for the retreat that hosts roughly 75 DJs, is mental health.

“It’s a very interesting thing that your job is to go out and make people happy through music, but yet no one ever asks, ‘How are you doing?’” Jazzy Jeff tells HipHopDX. “No one ever asks the comedian that makes you laugh, is she happy? I think everybody has lives. Everybody has relationships. There’s nothing different other than your profession that separates you from everybody else, but yet still there’s a whole laundry list of emotional things that no one ever bothers to address.”