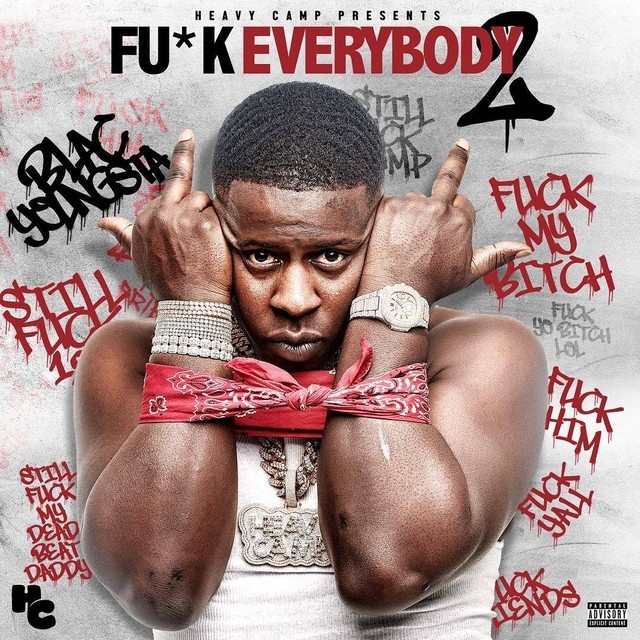 Just months after the release of his debut album 223 back in February, Memphis representative Blac Youngsta is back with the sequel to his fan beloved Fuck Everybody tape that hit the net at the latter part of 2016. As we’ve come to expect from the Youngsta, the project is a 10-track effort full of street and club anthems specifically crafted for the turn-up.

With lyricism low and content all over the place, Blac Youngsta isn’t here to grab the attention of the traditional rap fan, but will satisfy the core fan base he’s built over the years. On the opener “901” (his hometown’s area code), we find Youngsta at the peak of his powers flexing charismatically over a strong, bass-heavy instrumental guaranteed to have the clubs rocking. His signature catchphrases along with some hilarious, head-scratching lines like “Walking barefooted, how I got this big black toenail.” The energy of this record is sustained throughout the project, but not quite at the epic level of the intro.

Records like “Drive Thru,” a high-energy standout where Youngsta paints a picture of his trap house as a drug-dealing drive-thru and the Tay Keith-produced heater “Uh Uh” showcase the potential the budding producer has to really be a go-to guy for street bangers. Despite these bright spots, tracks like the very forgettable “Bullshit” still pop up unannounced like the bubble guts. No one is rushing to Blac Youngsta for a chart-topping hit currently, but he does have a unique way of making a song his own that he hasn’t fully tapped into. If or when he does, the trajectory of his career could skyrocket. The lone feature verse on the project comes from Lil Pump on the second of two Tay Keith joints in “Ight,” where Pump meshes well with Youngsta’s unfiltered style.

Song lengths average at just under 3 minutes, making for a quick listen. The closer on Fuck Everybody 2, “Breathe,” separates itself from the pack as the 28-year-old rapper delivers an emotion-filled record highlighting the harsh realities that tragically occur within street life on a regular basis. Youngsta touches on telling his boys to put the guns down, sings on the hook “Breathe, don’t die on me, Breathe, don’t cry on me/Breathe.” Although a final timeout on the antics is welcomed, a better balance of songs of this ilk would have elevated the quality of this tape.

After the last middle finger is waved, Fuck Everybody 2 stands as entertaining, fast-paced listen that real Blac Youngsta fans will enjoy. His song making prowess is evident and sets a standard for he and his camp to hone in on for his next major LP.