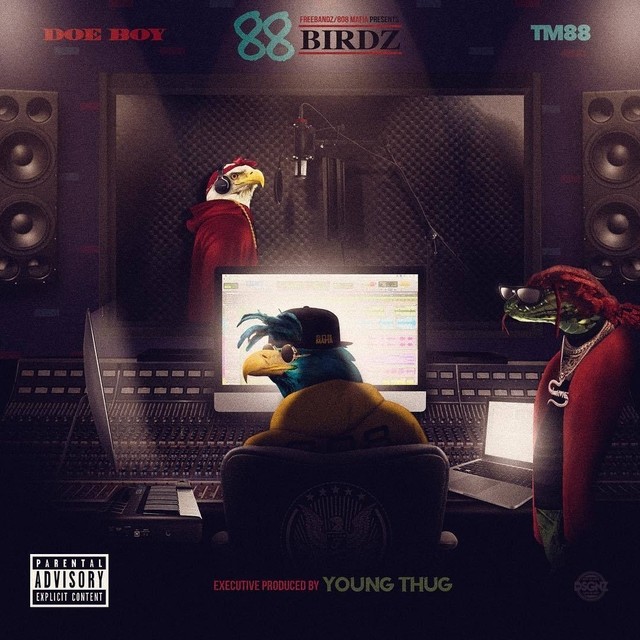 After months of teasing fans, 808 Mafia producer TM88 and Freebandz Gang’s own Doe Boy dropped off their 11-track joint albumixtape titled 88 Birdz. Doe Boy has been tearing through the mixtape circuit consistently over the past few years, most recently with the releases of In Freebandz We Trust 2 back in late 2017 and No Worries at the top of this year. With Young Thug handling executive producer duties on this one, combined with a strong list of features makes 88 Birdz the premier album of Doe Boy’s career.

The Cleveland rapper’s style fits the mold of any trap rapper this side of 2018. Despite the commonality, his commanding tone and delivery work mesh with TM88’s speaker boxes. The braggadocious raps and Migos-esque flow found on a banger like “2 Smoove” highlight why he’s one of the top gunners on the FBG roster. “38” is another track that effectively showcases his skill set as a captivating artist, as he openly gives some insight into his past experiences in the streets. Over a dark, menacing instrumental he raps “Momma kicked me out so many times I can’t count, Youngin hit a lick every time she put me out/ I got all this clout cuz my niggas they can vouch, really put in work they all know I ain’t no slouch.”

Despite there being clear improvements in his solo ability, Doe Boy falls victim to being overshadowed by his guest features. The project’s bouncy opener “Slimey As It Get” featuring Young Thug is a fire record that sounds like it could have benefitted Thugga’s last release Slime Language for the better. The early fan favorite — “10 Piece” with Future and Thug — and “Both Sides” featuring Moneybagg Yo are clear standouts. “Both Sides” is one of the more emotional songs on the mixtape and also features Doe Boy’s best melodic exhibition which effectively sets up a standout verse from the CMG rep.

Poor sequencing also knocks 88 Birdz down a couple notches, as the songs start to get monotonous stylistically. Records like “Ain’t No Love” and “Oh Really” come off like filler songs that could have been made by any artist in his lane, lowering the project’s ceiling. Based on this project, there could be a bright future ahead for Young Thug as an executive producer. He’s just going to have to learn what records to ultimately cut from the final tracklist.

The beats — provided mostly by TM88 with a few contributions from Zaytoven and Tre Pounds – are strong with an appropriate variation in style from start to finish. Outside the handful of glaring missteps, 88 Birdz adds strength to Doe Boy’s catalog and will go the distance in separating him from the countless rappers who occupy lyrical trap houses.