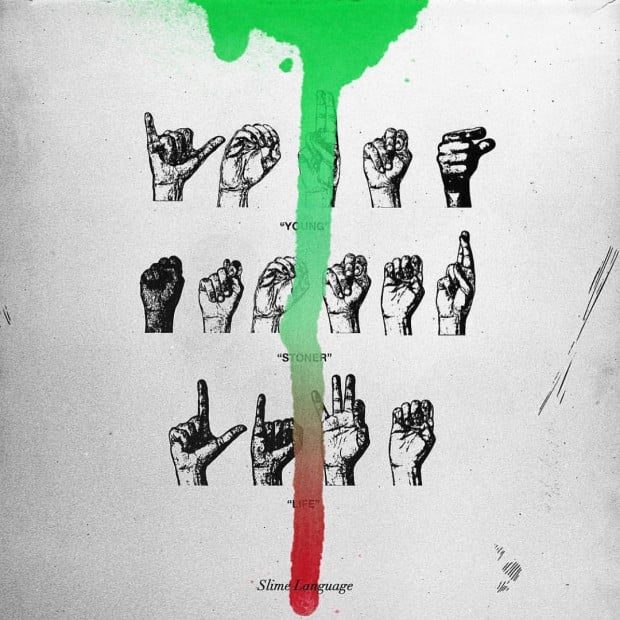 There are a few ready comparisons to be made between Young Thug & Young Stoner Life’s Slime Language and Lil Wayne & Young Money’s We Are Young Money Both are compilation tapes anchored by the premier artist’s star power; both feature a cast of rappers on the verge of mainstream success; both projects are 15 tracks long. But that’s where the comparisons stop. Unlike Wayne’s far-reaching camp of promising talents, Thug’s YSL family is entirely homebred and consists of members such as his fiancée Jerrika Karlae, sisters HiDoraah & Dolly, and longtime friend Neechie. In that sense, the stakes (and expectations) are much lower, leaving ample room for hidden gems and undeniable duds alike.

The production here is handled mainly by Wheezy, a YSL mainstay since 2015’s psychedelic Barter 6, with fresher in-house talents like Billboard Hitmakers, Turbo, and Thug’s tour DJ Aviator Keyyz, lending their sounds to enrich Wheezy’s already eclectic palate (back-half highlight “STS,” produced by relatively unknown beatmaker Super, even samples Donell Jones to great effect). By the time Wheezy connects with Charlie Handsome and Bobby Raps for the R&B leaning ballads “January 1st” and “Chains Choking Me,” it’s clear that his development as a genre-defying producer on Beautiful Thugger Girls was no fluke.

However, unlike a standard Young Thug project, Slime Language struggles to remain captivating for the entirety of its runtime. The vocals found throughout are uniformly polished, thanks to the attentive ear of Thug’s longtime engineer Alex Tumay, but the album’s sequencing leaves much to be desired. After an effortlessly magnetic intro, “U Ain’t Slime Enough” feels like a studio experiment that should’ve been cut. It’s a decent debut for Karlae, and Thug himself absolutely floats over the Woodpecker-produced instrumental, but it’s a jarring reminder that we’re in for a mixed bag of features.

Case in point: MMG’s Tracy T adds nothing to “Audemar”; Neechie phones it in and makes a boring rehash of Gunna’s “No Joke” for the closer “Slimed In”; and when left to their own devices on the penultimate track “Expensive,” Thug’s sisters connect for tepid results. On one hand, HiDoraah and Dolly have developed considerable chemistry since their debut on Thug’s 2016 ballad, “Family.” But on the other, their delivery still feels crass, much like their brother’s early days but without his off-the-wall pen to match.

Outside of Lil Keed’s dazzling turn-up on “Goin Up,” the onus is usually on Thug to counterbalance the other newcomers’ oftentimes sophomoric contributions. Expectedly, Thug’s two solo tracks (“Tsunami” and “Gain Clout”) are exemplary, both showcasing wildly different vocal techniques. “Scoliosis,” featuring Gunna and Duke, is demonic and defiant in a way that simultaneously recalls and revamps Thug’s early, non-commercial work (such as “Danny Glover” or “Eww”). The Gunna and Lil Baby-assisted “Chanel (Go Get It)” is the complete opposite and plays like an earnest bid for the Billboard Hot 100. And both the remaining tracks with Gunna — “Dirty Shoes” and “Chains Choking Me” — are composed of relentlessly infectious melodies.

At the end of the day, Slime Language suffers from being predictable, which is the last thing you’d ever want or expect from a Young Thug-affiliated project. The lesser-known artists don’t make much of a mark, the more notorious features are the clear highlights, and the project, as a whole, offers nothing to compete with the highs of Beautiful Thugger Girls — let alone the hallucinatory string of releases from 2015.

However, Thug is still Thug – that is, a remarkable vocalist-turned-songwriter with frustratingly great potential – and that’s a constant we’ll gladly take.