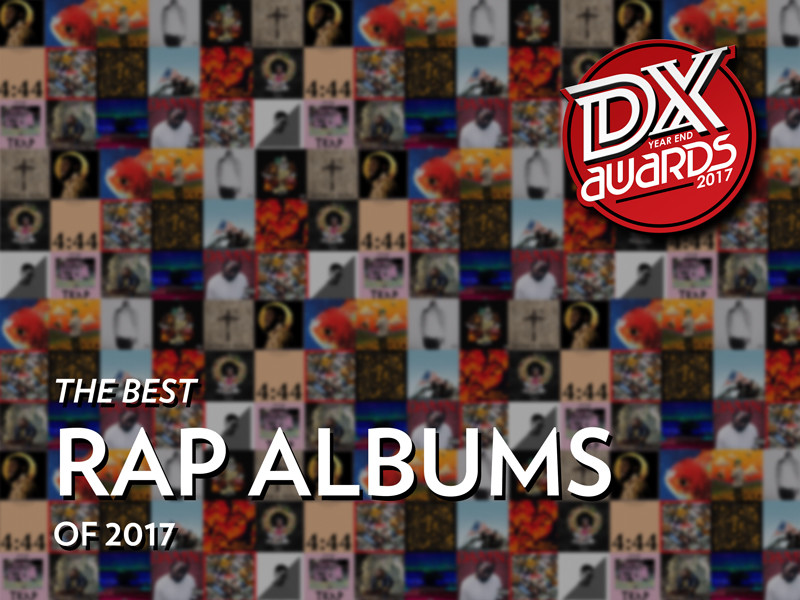 The current Hip Hop landscape might be single-driven with new artists breaking through with viral hits, but the album remains the true judge of who’s here for the long haul. In 2017, fans were rewarded with a variety of outstanding LPs from mainstream stars and indie stalwarts.

After countless hours and much consideration, HipHopDX has narrowed the projects down to the best of the best. Here are the Top 20 albums of 2017. Check out our Most Slept-On Albums, Best R&B Albums and Best Mixtapes/EPs for more of our favorites from 2017.

One of 2017’s most unlikely Hip Hop heroes, Jonwayne returned victorious from a battle with alcoholism to deliver Rap Album Two this February. A largely self-produced project that offers great insight into the struggles (and successes) of the California-based MC, Rap Album Two showcases a different side of Hip Hop wherein riches and wealth are replaced with everyday issues, including self-doubt, pain, and, at times, joy. For those in search of New Year’s resolutions, tracks like “Afraid of Us” will inspire you to live your best life in 2018.

On Young Thug’s “singing album,” the occasional womenswear model continued to break the mold in 2017 with a warped version of Rap, R&B, pop and … country (Yeehaw!). The project beams with big ideas, and repeated listens will turn its often unorthodox melodies into deep-rooted earworms. Thug found some commercial success with his (pre-Super Slimey) collab with Future on “Relationship,” and the album’s deeper cuts include impressive features from the likes of Jacquees and Snoop Dogg.

J. Cole raised a few eyebrows when he signed Atlanta’s J.I.D, but anyone familiar with the Spillage Village collection already knew why it was a good idea. On his debut, The Never Story, the lyrical dynamo showed his potential by putting on a tour de force in rhyming. J.I.D avoids being pigeonholed too, displaying his versatility on jazzy cuts like “Hereditary” or the soulful “All Bad.” He and fellow Dreamville signees EarthGang (also part of the Spillage Village crew) are proof that Cole is building something special at the label.

Whether they were airing out phony people (“Ffake Ffrends”), honoring the environment (“Greener Grass/Cleaner Water”), or just basking in their own cool (“It’s a Trip”), there was zero shortage of harmony and endless positive neurons for minds to absorb.

Anyone who has followed the multi-talented Washington D.C.-based MC/producer over the years was once again rewarded in 2017 when Oddisee released The Iceberg. One of Hip Hop’s more consistent artists, Oddisee’s latest studio album continues to refine his often soulful sound and his expert lyricism — which often touches on race and politics. Filled with live instrumentation and a hefty dose of life advice (along with the undeniable groove of tracks like “Want to Be”), you can file this one under “Albums We Needed In 2017.”

2017 saw Meek Mill become the poster boy for America’s flawed probation system when his prison sentence for repeated violations was met with outrage. But before that came Wins & Losses, a brief, shining moment in which it looked like Meek was back. The album found him profoundly reflecting on his successes and failures — including his beef with you-know-who — over hard-body beats. When he wasn’t looking within, he was waxing thoughtfully about the nation’s turbulent state. “Young Black America” sports JAY-Z’s “Blueprint (Momma Loves Me)” beat, as Meek drips his pain all over the track. Resounding victory.

It wasn’t quite Dark Sky Paradise, but I Decided. continued Big Sean’s streak as one of the most consistent rappers out. The album is filled with the elements that make Sean Don shine when he’s at his best: club cuts, soulful confessionals, and witty quips that demand replay. Maybe it’s because Sean still hasn’t reached the level of cohorts Kendrick Lamar and Drake, but his hunger kept the familiar fresh throughout his latest solo album. While fans may crave more risk-taking for his next go-round, we can all be grateful that he decided to stick to the plan and craft yet another memorable album.

During the two-year period between his B4da$$ debut album and his All Amerikkkan Bada$$ sophomore effort, Joey Bada$$’ matured from the reluctant champion for ’90s NYC rap romanticism to a 21-year-old man with worldly experience. The harmonized choruses and trap elements on the album’s gold-selling lead single “Devastated” and “Y U Don’t Love Me?” expose the Brooklyn native as emotionally wrought from the death of his Pro Era co-founder Capital Steez and from the pressure of the high expectations of his own artistry. The politically charged “Land Of The Free” and “For My People” show America’s plight transitioning from Obama’s idealism to the reality of Trump’s otherness on people of color. His songs of innocence and lyrical exuberance as a boy wonder transitioned to his agenda staging his wokeness and self-reflection.

2 Chainz had yet to deliver a unanimously strong album that had as many solid deep cuts as it did hit singles — until he dropped Pretty Girls Like Trap Music. Yes, there are tons of hits like “4 AM,” “It’s A Vibe” and of course “Good Drank” but there are also some cuts like “Riverdale Rd” that take listeners all the way back even before the Tity Boi days. It also features some of 2 Chainz’s best rapping, where he keeps up with high-profile guests like Drake, Nicki Minaj, Migos, Gucci Mane and Pharrell, over production provided by an all-star lineup including Mike WiLL Made-It, Murda Beatz and Honorable C.N.O.T.E.

Despite having more projects in 2017 than Google Labs, Future really showed out on HNDRXX (the one with “Coming Out Strong,” just in case you’re lost). Through an alt-R&B that rarely flirted with repetitiveness, The Freebandz Gang boss offered his most insightful album to date, flashing genius writing skills and emotive lyricism that illustrated sounds of love and pain.

HNDRXX was also a heavily awarded affair. Between its HipHopDX review score of 4.2 and platinum-selling Rihanna feature “Selfish,” it also helped solidify Future’s place in history by making him the first artist to release two albums that topped the Billboard 200 in consecutive weeks. Sing it with us: in-creeeeedible.

As Gorillaz frontman Damon Albarn told HipHopDX, Vince Staples is “kind of anti-Hip Hop” and he proved it with Big Fish Theory. The Long Beach rapper delivered an atypical effort that bubbled with minimal techno vibes and eccentric uptempo dance beats — a far cry from the more straightforward rap songs like “Norf Norf” and “Blue Suede” that initially put him on the map. In its stark uniqueness, Staples seemed to find his niche. Album highlights include “Big Fish,” “BagBak” and “Party People.”

Don’t let the title fool you — Belly and Boi-1da’s collaboration album is anything but indistinguishable. Belly comes with enough quotables to fill a tear-off calendar, while Boi-1da imbues each track with a sense of foreboding. While Belly’s boasts and threats are nothing new, his can’t-look-away mic presence keeps Mumble Rap compelling throughout. He also shows he’s capable of impactful moments, such as on the soulful “Lullaby.” However, Belly and Boi-1da shine brightest when they dive into the gutter with cuts seedier than watermelons, such as “Bobby Brown.” With Mumble Rap, this dynamic duo further bolstered Roc Nation’s formidable reputation. The come down is too real.

Twenty-two years after creating a clear blueprint for mafioso Hip Hop with Only Built 4 Cuban Linx…, Raekwon’s seventh studio album The Wild was a mature and — at points — retrospective slice of goodness. With a subdued guest list that featured verses from Lil Wayne on “My Corner”, G-Eazy on “Purple Brick Road,” and his (newest) protégé P.U.R.E. on the grimy single “M&N,” Rae sounded raw as he gave his outlook on the current state of the game while reflecting on how far he’s come.

Was there another rap album that dropped in 2017 with as many hit records as Culture? The Migos’ best project to date dropped almost a year ago and was jam packed with an assortment of hits that stayed popping well into the following 12 months. “Bad and Boujee” brought the masses to the Migos’ traptastic world and then “T-Shirt,” “Slippery,” and “Call Casting” helped make Culture a widespread favorite. Their often-imitated-but-never-duplicated flow and amazing ear for production kept both teens and tough guys vibing all year.

Few artists have been able to justify making a double album. And in today’s microwave era of music, it’s an even tougher hill to climb. Yet somehow, someway, Big K.R.I.T. managed to create a substantial double LP in this climate. Krizzle’s indie return, 4Eva Is A Mighty Long Time, did so by following a concept, where instead of simply creating two albums worth of music, he explored duality. The first disc is brazen and full of bangers. The second is introspective and soulful. This musical deconstruction of the multi-faceted Mississippian is not only an impressive career achievement but also stands among 2017’s best.

Tyler, The Creator has had trouble in the past finding out exactly what his perfect sound is, but with the gimmicky days of OFWGKTA mostly behind him, he was able to strike a perfect balance. Flower Boy harnesses the raw emotion of that angsty teen we’ve grown up with and channels it into his best project to date. His honesty is uncanny on songs like “November” and “Foreword” but his ignorant wild boy side rears its (big-eared) head on “Who Dat Boy.”

Hov put on his big boy pants and spit some grown man raps for 4:44. Throughout the 11-track album, he came armed with hefty doses of courage and transparency, dispelling his sins like he was in a Catholic confessional booth. From a full-on admission of infidelity, to talking about his mother’s sexuality, to taking shots at Kanye West, the Hip Hop mogul put it all out there. Coupled with the dark, brooding production from No I.D., 4:44 proved (once again) what makes JAY-Z one of the best to ever do it.

3. CyHi The Prynce — No Dope On Sundays

CyHi The Prynce seemed to be stuck in mixtape purgatory. At one point, it looked like the pinnacle of his career would be writing for Kanye West, but he changed all that with the release of No Dope On Sundays. The album is the culmination of years of hard work, living up to the lofty expectations of the talents he first displayed almost a decade ago. Whether it be the lyrical fireworks of “Amen” or the riveting narrative of “80’s Baby,” CyHi puts on the ultimate showcase of what it means to be an MC.

Rapsody found herself in good hands when renowned beatsmith 9th Wonder signed on to produce the majority of Laila’s Wisdom, the North Carolina native’s sophomore album and first for Roc Nation. With features from Kendrick Lamar, Anderson .Paak, The Roots’ Black Thought, Busta Rhymes and BJ The Chicago Kid, her propensity for high-quality contributions runs rampant throughout the 14-track masterpiece. The album earned Rapsody a handful of Grammy nominations and she never had to compromise her integrity to get there. Her impeccable bars and flawless delivery did that for her.

Rap Album of the Year

Kendrick Lamar has been crowning himself as “King Kendrick” for years but it wasn’t until the release of DAMN. that his coronation was complete. The album was immediately heralded by many as a classic — an ambitious claim — but the more the album breathed, the more it lived up to the hype. Propelled by the smash single “HUMBLE.”, each of the 14 songs bring a distinctive take on Kendrick’s ongoing tug-of-war between spiritual predicaments and his increasing celebrity status. The greatest parts of K. Dot’s musical arsenal appear on DAMN. – whether it’s his aggression on “DNA.”, harmonizing on “LOVE.” or storytelling on (DX’s Top Song Of 2017) “DUCKWORTH.,” the album packs a serious generational punch.