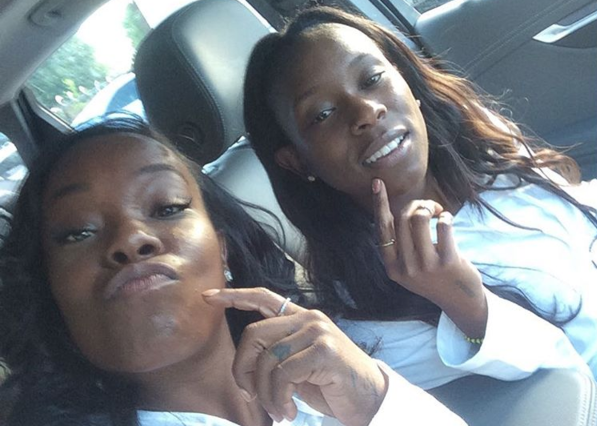 Los Angeles, CA – For years, the Young Thug YSL website has simply read: “Young Stoner Life is not only an apparel line but a movement started by recording artist Young Thug.” It’s vague on purpose, theoretically giving the subversive Atlanta rap star complete reign over multiple forms of self-expression. Up until recently, YSL has seemed to be just a clique of sorts – one you can kinda-sorta hear referenced amongst the ad-libs on your favorite Thug track. But it’s also a makeshift label. It’s biggest exports are a slew of endlessly talented composers (such as Wheezy, one of the executive producers for Jeffery) and childhood comrade turned rap star in the making, Duke (first introduced to the world on Barter 6’s “With That”). It’s not much, but think of YSL like Taylor Gang before the fame; right now, even after years of putting in work, it’s still a budding idea. However, most worthwhile endeavors are like that. The longer the wait the bigger the payoff, or so the saying goes. And now, more than ever, Thug is in a position to finally spearheaded this “movement.”

Enter Dora & Dolly; two of Thug’s closest sisters, and a pair of brand new rappers fresh off their first project. Dolly, the older of the two, is more brazen, never anything less than upfront with her thoughts. Dora, the Lucky Charms advocate who gained a cult following of sorts after Thug mentioned her on his platinum single “Best Friend,” is the more disarming half. Both are ostensibly vibrant and bubbly when they want to be, but this cheerful spirit can be misleading. Experiencing the same taxing childhood as Thug, with more than their own share of stories, the duo’s main focus lies on family. Trust, loyalty and perseverance are key themes that ground their debut, and the engaging execution therein is a testament to the natural bond the possess.

Always on the road, whether as a part of their brother’s close-knit entourage or working on their own hustles, HipHopDX was finally able to chop it up with the sisters this past weekend through a series of increasingly animated emails.

Check out the exchange below.

HipHopDX: Before we jump into this, I just want to thank you two for taking the time to speak with HHDX. In the Complex interview following your features on I’m Up’s closing track, “Family,” you two seemed unsure of your trajectory with rap. What made you take the leap of faith and work on finishing and releasing your debut EP, Family Ties?

Dora: Um, to be honest, it was all because we’re in the studio all the time. I’m always trying to make the best out of things. I’m like, there’s so much time being paid for and not being used so I asked Dolly if she was down to try something different and she’s always down — whether it’s right or wrong.

Dolly: I was like bro…are you serious, you want to drop an EP? Fuck it, why not. Everybody rapping nowadays, our shit will be hotter than the average. And it went from there.

DX: Knowing the YSL camp, I was expecting something light-hearted from this EP — a fun starting point for future development. Instead, you guys went all in. We got a thoughtful look into your relationship with each other and your family, and there was a prevalent air of nostalgia. A lot of self-reflecting. Did you guys purposefully chose to give the tape such an introspective tone?

Dora: I had in mind that we are the sisters of Young Thug and everybody watches and follow us. Let’s not just give them anything and actually show our talent. So, I recorded on beats where you have no choice but to say something, and not anything just to be heard. And Dolly liked what I did and her liking what I did opened my vision more.

Dolly: I would say the tone is really our tone no matter how we did it. We just went off each other vibe and the things we’ve been through.

DX: What does family mean to you?

Dora: Hmm, very good question. To me, FAMILY IS EVERYTHING. And it’s FAMILY OVER EVERYTHING!

Dolly: FAMILY OVER EVERYTHING. FAMILY IS MY ALL!

DX: The vocals on this tape are often drenched in Auto-Tune, almost overpowering some of the more natural melodies, but ultimately creating a distinct and memorable aesthetic. Where did this stylistic choice come from, and where you concerned at first about what your “sound” would be?

Dora: Like I said, we learned sooooo, sooooo, soooo much from our brother. Seeing him directing his engineer on how to use his vocals made me understand so much about how you want your sound to be heard. So I listened to the different effects and was like, this is for my voice, now let’s take the time to find Dolly’s voice. I was concerned that I sounded too clear. But then I was like that’s my real voice so now I just need to get comfortable with it.

Dolly: I mean, I just wasn’t into all that. I wanted to sound like me.

DX: What music, rap or otherwise, has influenced your taste?

Dora: I love all genres of music but I’m more willing to be an actor than anything. My influences are people who I really have studied and followed over the years…I try to be on a different level when I do music.

Dolly: I’m more of a rap listener and often pop if the song is just hard. I may or may not turn up on my own music.

DX: Your chemistry on a track like “In My Pocket” seems so natural. Which records did you have the most fun creating? What’s your favorite?

Dora: “In My Pocket” was actually a fun one to record. Another good one was “The Truth,” because it featured my brother who’s in prison. So, to see my engineer find a way to really get his voice to be clear…was breathtaking. My engineer is a GENIUS. Not only that, I talked about some really powerful stuff I had been hiding for some years now in that song. And I remember asking my other sister if I should do it or not.

Dolly: Yeah, “In My Pocket” was a good one. “Pain” was really fun for me because I felt that beat in my soul and put the pain with it.

DX: Was there a conscious decision to keep Thug – er, Jeffery – to just one feature? I’ve seen him used more liberally on other YSL tapes.

Dora: Yes, we wanted to keep the tape family oriented [but] we was like, we don’t wanna have him all over the tape because it would take away from our creativity towards it. So we both agreed to let him open the tape up and let my other brother close the tape.

DX: Is there anyone in particular you’d like to work with in the future? Maybe Gucci?

Dora: Haha, Guwop. It’s funny you said that because we mess with Amina a lot about getting a feature with Guwop because she manages him. But our pockets not that thick for a Guwop collab. I mean, I would love to work with whomever but you wanna make sure the person doesn’t feel like you are just using them. You wanna be very careful with that.

Dolly: [Laughs] Right. When time gets there I’ll work with whoever.

DX: Outside of YSL affiliates, who are your favorite artists of 2016? Favorite projects?

Dora: Jeffery, Dora and Dolly, A-Boogie [Wit Tha Hoodie], the new [Lil] Wayne, Ralo, Trouble DTE. Solange right now is my favorite…that girl is so creative and talented. Took forever for the people to recognize her talent and actually respect her.

DX: Some might think it’s unrelated to the music, but social media seems to play a big role in shaping an artist’s fan base these days. What are your thoughts on this dynamic? You two both seem to be very open to fan interaction.

Dora: It does and that’s just the new wave, new generation dialogue. And it’s going to get deeper for the internet users.

DX: Let’s cause some drama – who’s your favorite YSL artist? Duke seems to have the strongest fanbase outside of Thug, but I’m personally looking forward to debuts from Gunna and Twice.

Dolly: YEAH DUKE WILL BE MY CHOICE TOO. Outside of Me and Dora — we next in line.

Dora: MORE AND MORE TO COME…STAY TUNED! Like seriously, more and more to come. Even from a television standpoint, right Dolly?

Dolly: YEPPPPPPPPPPPPPP. RIGHT. MORE TO COME. JUST GROW WITH US!