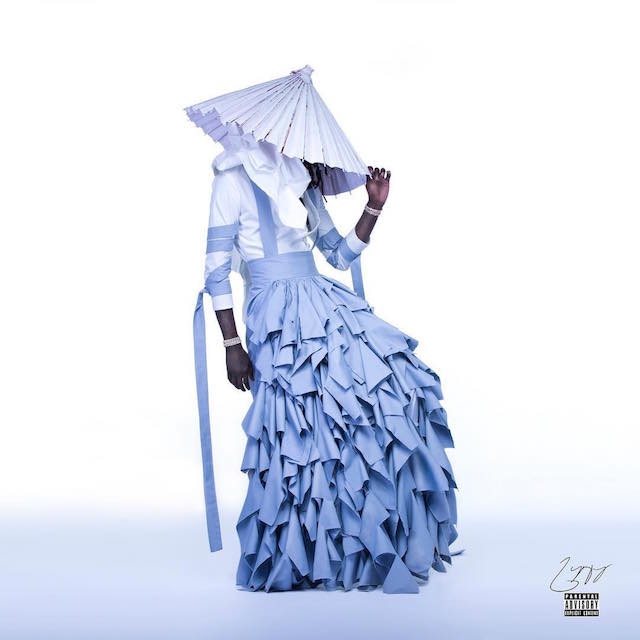 The already infamous cover for Jeffery, Young Thug’s third project this year, sees the 25-year-old Atlanta rapper, who can currently be found on billboards in Manhattan modeling womenswear for Calvin Klein, working a purposefully genderless outfit by Italian designer, Alessandro Trincone. His face is masked by a white bonnet of sorts, body engulfed by a baby blue gown, as he strikes a pose eerily reminiscent of one of Michael Jackson’s signature dance moves. The accompanying tracklist photo sees him peeking out from under the same ensemble, beaming his $20,000 smile. Although Young Thug, born Jeffery Lamar Williams, has been publicly toying with the idea of changing his stage name to his birth name, citing his growing kids and his own career trajectory as reasons for not wanting to be referred to as “Thug,” the rapper seems as self-assured as ever in this photoshoot – a trait which fortunately translates to the music itself. This year’s I’m Up and Slime Season 3 cast considerable light on Jeffery’s progressiveness.

Executive produced by Wheezy and TM88, and mixed by the engineer behind 2015’s Barter 6, Alex Tumay, this album is, sonically, Young Thug’s most ambitious effort to date. All producers involved (from relatively unknown composers such as Billboard Hitmakers to rising star CassiusJay) experiment with their given styles, subtly incorporating newfound elements of reggae and dancehall throughout the 42-minute run time. Together, they dispel paper-thin criticisms of the production within Thug’s camp being redundant or atypical to the southern “trap style.” “Future Swag” may have the menace of a standard 808 Mafia beat, but on “Wyclef Jean,” and “Kanye West,” Thug floats over increasingly bubbly instrumentation outfitted with strumming guitars (electric and acoustic), delicate keys and bouncing basslines.

Where Barter 6 showcased Young Thug’s sprightly flows and nuanced songwriting, Jeffery now hinges on the artist’s increasingly elastic vocals; his blunt-force delivery is the main spectacle here and Jeffery does approximately 35 new things with his voice. At times, the experimentation frays at the outer edges, but you know that part on James Brown’s “Lost Someone,” the Live From the Apollo version, where he shouts “I feel so good I want to scream,” then screams before playing the track out? That’s basically Jeffery’s entire vocal style in a nutshell: it’s a whirlwind of sporadic yet purposeful emoting that’s finessed with frightening ease. It’s a high-stakes performance that sees him waking up mid-verse on “Swizz Beatz” to howl “wake up to Young Thug,” delivering strained yet affectionate yelps on “RiRi,” and embodying a bluesy intonation for the centerpiece, “Harambe.”

All memes aside, take that very track, “Harambe.” Jeffery spends the entirety of the song reciting a grocery list of people he’d love to wipe off the face of this Earth, with pent-up aggression that becomes more apparent with every strained crack in his voice, before running head first into an existential crisis. “I got the devil inside me,” he growls, effortlessly toying with his inflection, “God tryna decide, do he wanna leave me or sign me.” “RiRi” showcases a similar internal struggle as he slurs: “I know I’m a blood, I’m a gang banger/I know I ain’t a bitch but I’m still singin’.” These asides are delivered with palpable conviction and act as necessary moments of self-reflection that ground the surrounding celebration.

Throughout the project, Jeff repeatedly touches on love: “all my children spoiled, yeah they got it all” he claims on the intro and, inversely, “mama told me I’m her brightest star” on the bonus cut. On “Webbie,” he passionately promises the same mom that she “can’t lose,”while “Kanye West” is an ode to his fiancée (the verses see him adding her to his will). “RiRi” makes that same fiancee playfully work for his love as he showers his friends with adoration (and yacht parties). “Swizz Beatz” may never receive the same fanfare, but for what it’s worth, it’s one of the best self-love songs this side of Kendrick Lamar’s “i.”

And therein lies Jeffery’s main shortcoming: after countless projects and a handful of singles teasing commercial success, Young Thug still floats somewhere between internet obscurity and pop-renegade. Mr. Willaims claims the songs are titled after his idols, but rather than shed light on his influences, he only further obscures his appeal. His cultish fanbase upholds his momentum, but for the uninitiated, this intrigue can prematurely fade as early as the second track, “Floyd Mayweather.” Overlong and featuring a sputtering Travis Scott verse, “Floyd…” as well as “Future Swag,” and “Guwop,” struggle to break new ground. For the most part, Jeffery is an economical tape, making inspired use of new YSL signee Gunna, a rejuvenated Young Scooter and a world-weary Wyclef Jean. However, its reach doesn’t often extend far beyond Young Thug’s pre-existing universe. The potential is there, but it may be time to retreat and regroup before casting another reel into the mainstream.

Young Thug ends Slime Season 3 wanting a “fuckin’ Grammy,” and Jeffery opens with him promising he’ll “do it my way.” With his debut still in limbo, the artist soon-to-be formerly known as Young Thug is refreshingly confident in himself and his career trajectory (“I just signed a deal with Calvin, baby clap for me”) but is also continuously reckless with his execution, for better or worse. Regardless, from the jamming intro to the sublime closer, Jeffery is a testament to the rapper’s carefree spirit. And if his uninhibited self-expression offends, he has but one bar for you: “pardon me, pardon my soul.”