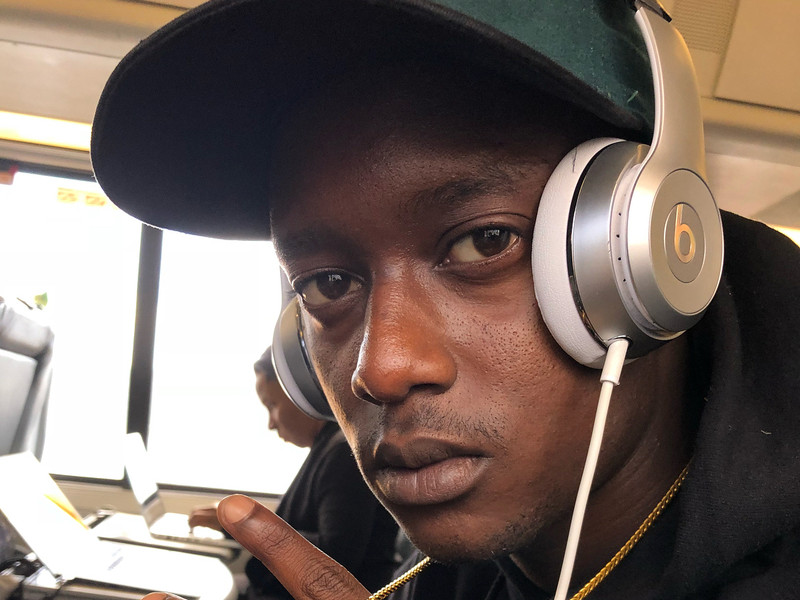 The long road to Buddy’s debut album reached its destination in July. Years after being signed by Pharrell, the Compton-bred MC was finally able to share his LP with the world — and it was well worth the wait.

Although Buddy dropped two EPs in 2017 (Ocean & Montana with Kaytranda and the solo effort Magnolia), Buddy’s Harlan & Alondra is arguably the best introduction to the talented artist’s work. All of his versatility is on the display, bolstered by the creative chemistry he’s built with a team of producers: Mike & Keys, Brody Brown and Roofeoo.

On the heels of his album’s release, HipHopDX caught up with Buddy to discuss his critically acclaimed LP. The West Coast rhymer allowed a peek behind the curtain, detailing the making of multiple tracks and the origins of the collaborations. He also recalled his time with Pharrell, explaining how he went from being the last signee at Star Trak to ending up at his current home of RCA Records.

HipHopDX: Your debut album has been a long time coming. Were there different iterations of this album that existed or was this simply the final product that you’ve been working on all these years?

Buddy: It definitely changed over time. I’ve kind of always been making a bunch of songs, but the body of work that we released was the first time that we actually collectively created a sound between Brody [Brown], Mike & Keys and Roofeeo. We was in the studio every day with the same goal of creating a full body of work.

DX: Mike & Keys and Brody Brown were a big part of this. Can you tell me a little about the chemistry that you’ve built with them?

Buddy: Well, I’ve been working with Mike & Keys for years now. Brody, I just started working with him during the album, but he’s always been a close friend. He’s always been super busy working with a bunch of other people, doing his own thing, but finally got an opportunity to work with him and it’s been amazing, with everybody.

We had a bunch of instruments, and they would just play random sets and jam out together. I would just rap and sing on top of free, instrumental, jazzy vibes, and then we would add a bunch of post-production sessions with just like hours of jam sessions. And we would just sift through them and pick the best parts and make them into full songs.

DX: Got it. Now, when you started this album with “Real Life Shit,” I thought that was a good intro to your music. Tell me a little bit about that record and what went into it.

Buddy: That was one of the first ideas that I started. Kind of in the beginning stages of the album when I was working with Brody, it was just me and him, and he was like messing around and smoking the beats. I was on the mic doing the “ladda dada da” and then I kind of just freestyled some shit and he felt the beat more. Then Roofeeo came and that all ended up in the record that you hear today.

DX: Nice. I think one of my favorite records on there was “Black.” It was super-charged anthem with a lot of power behind it. A$AP Ferg seemed like a good choice for the guest. How did you end of linking up with him for that?

Buddy: I was actually working with Pharrell trying to get the beat from him for the album, and he was working with A$AP Ferg at the same time. And he left early because he’s got kids, so I was hanging out with Ferg. I played him the record, and he was like, “Aw, yes, send that over right now; I’m about to rap over it!” He did it immediately.

DX: Another collab I really enjoyed was you working with Ty Dolla $ign. He’s been so prolific. What was it like to get in the studio with him?

Buddy: I worked with Ty Dolla $ign a couple of times now, and he kind of just popped in. He’s always working, so what happened — I was at Westlake. It’s a popular studio out in Los Angeles where a lot of artists work. So, he was in the other room and kind of coming down ready and just stopped by in the studio set that I was in. He went in the studio and didn’t come out until his verse was done, and it really made that record super dope.

We got something coming! ? ? @grams

DX: On “Trouble On Central,” I liked the way you were able to balance the relaxing vibe with subject matter that had some gravity to it and some consequences. Was it difficult or easy for you try to strike that balance?

Buddy: Pretty easy. I was just depicting a time in my life when I was right there on the side of the road in the overheated, broken-down car trying to make it home, you know, and just not trying to be stuck right there on Central Avenue. It was super easy to just … it was like, such a vivid moment in time of my life where I just wanted more for myself. So, it was super easy to depict.

DX: With “The Blue,” you’ve obviously got Snoop Dogg on there, and it felt like has a connective tissue with G-funk and West Coast tradition. Can you talk about that record and what inspired it?

Buddy: I had that beat, it was so tight. I was just like … I started singing over it, and then we got Snoop Dogg on it, and it was tight. I used my little falsetto voice, kept it light, and it came together. Everything was super organic. We were just jamming out and having fun. It was super loose. Kind of just played whatever until we saw what came out.

DX: On “Find Me Too,” you touch on your status with Pharrell. You mention being the last person signed to Star Trak; can you elaborate a little bit on your journey from that first signing to where you are now?

Buddy: Yeah, when I was first signed to Pharrell, it was super tight. Pharrell’s always awesome, an icon. Star Trak was super tight. And then he changed everything and got a hand in infrastructure when it was i am OTHER.

Have an Awesome Awesome birthday @pharrell ?

And I felt like during that time when it was i am OTHER, it was more of a development for me. Because early in the beginning stages making the new label entity with the i am OTHER thing, as well as having artists, I felt like it was just my first step into the music business and the industry.

So, it was more of me developing. I had the opportunity to see how things went down and studio sessions, see how songs are made, seeing how albums are created, seeing like rollout plans and all type of stuff. I was just oblivious of that before being signed to a major artist like Pharrell.

DX: So when did you officially link up with RCA, and what made them the right spot for you?

Buddy: Around last year. It’s been around a year now. They just offered me enough money and allowed me to do whatever I wanted to do in the course and process of making my album.

DX: Can you talk about your mindset on putting out the EP with Kaytranada and Montana before your debut album? Did you want to build up something before your official debut?

Buddy: Yeah, I didn’t have that many songs out. So, I just wanted to put more songs out, feel some kind of momentum, gain some clout, you know, get some eyes looking my way. Get more of a fan base or create some kind of demand for my music rather than just putting something out that nobody was going to pay attention to.

DX: Got it. My favorite record of yours is “Shine” and that closes out the album. But, it originally dropped in 2016. I wanted to hear your thought process on putting an older song on the album. A lot of people would just move on, but I thought it worked well as a closer. Can you tell me about that?

Buddy: Well, that kind of happened with the universe. I actually had a whole ‘nother record that I was going to put on there, but I didn’t get a sample cleared. I had referenced some Kirk Franklin stuff, and he didn’t clear it and let me use it, so we wasn’t able to put that song on the album. So, it was super last-minute. We were deciding on whether we’d have less records or add another record and what record would be dope because I have a bunch of other records that are made and haven’t been heard.

But at the time, I was just thinking “Shine” is such a single that’s amazing, that everybody loves and it doesn’t really have a home on any other projects. It’s not on any other projects, so I just really wanted to give it a home and a place to just be. It made perfect sense. And I feel like people who haven’t heard it now get the opportunity to hear it, and it’s still just as good. It goes to show you the difference between quick little songs that come and go and songs that are just classic and timeless to last forever.

DX: Definitely. Speaking of that point, what challenges do you find with the way that you have to compete these days — and constantly releasing music — versus creating those type of songs like “Shine” that can last?

Buddy: I don’t really feel any challenge. I just don’t pay attention to any of the expectations of pressure that people build up around me or themselves or artists or whatever. I just do my thing. I go to the studio on and off. I live life, gain new experiences, I read books, travel, do a bunch of stuff and then make the music I want to make and don’t really worry about everybody else’s opinion.

DX: Now that your debut is finally out, it’s an exciting time for you. What’s next? Are you ready to start touring for this album? Or are you already in the studio again working on something else?

Buddy: I’m definitely in the studio constantly, making a bunch of new songs and vibes. But, we are trying to get a tour squared away for the fall. We haven’t figured out what tour we’re going on just yet.

DX: One thing I did want to bring up was a funny show you got to participate in: Fat Tony’s Thrift Haul. I really enjoyed your appearance on there. Can you tell me how you linked up with Tony and ended up on the show?

Buddy: Yeah, Tony’s a homie. I met Tony through my friend Asher Roth, and he invited me to do the Thrift Haul. And I was so down. It was cool. I answered a couple questions, I picked out an outfit, and I won actually. I won the game show, so it was tight.

DX: Are there any other web shows or similar things that you’re trying to do like that to get your name out?