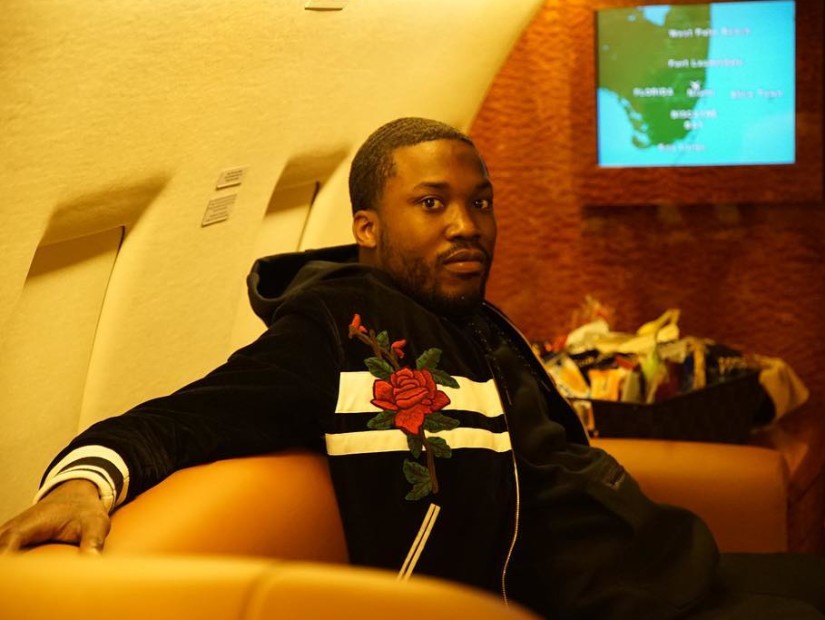 This week in Hip Hop, Meek Mill’s goons beat up Beanie Sigel backstage at the Bad Boy Reunion Tour. Elsewhere, The Game apologizes to Nicki Minaj for including her name in his diss towards Meek Mill. Lastly, Beanie Sigel tells all and explains why things really went the way they did.

Meek Mill’s crew knocked Beanie Sigel out backstage at a Bad Boy Family Reunion Tour show for speaking to The Game following their “OOOUUU” diss featuring Omelly and Beans himself. Teefy Bey was revealed as the culprit and The Game’s manager, Wack 100 called out the Dreamchasers for touching the Philly rap legend. However, the beef between all parties continues. The Chasers also clowned Game for claiming he visited cheesesteak spot Max’s Steak in Philly on his Instagram with a Googled image of one of their sandwiches.

Behind it all, Meek and his team were reportedly upset with Beanie for revealing that he came to the studio to help them write their verses.

In the middle of The Game and Meek Mill’s lyrical and social media war, the Compton, California rapper name dropped his enemy’s girl’s name, Nicki Minaj, on the diss track “92 Bars” offering up the D to her amongst other things.

When asked about the lyrics on The Breakfast Club this week, he did apologize for dragging The Pinkprint rapper’s name into the beef.

“I’m sorry I had to drag her into this, and it was a minimal drag, but she wasn’t disrespected at all I went and I did what I had to do,” he says. “It looked like a photo shoot or a video shoot, it don’t look like us in a hotel room.”

Following the incident with Beanie Sigel and Teefy Bey at the Bad Boy show, the Philly legend spoke with Taxstone on his podcast giving lots of insight into his involvement with Meek and Game’s beef. Beans explains what actually happened and why he thinks he was targeted by Dreamchasers.

“What happened at the show is, I went there, was supposed to talk to Meek,” he says. “His representative, his spokesperson at the time, for whatever reason, he felt as though he had to stand up for that man. Big man’s first altercation ain’t go his way.”

Beanie goes on to explain that he came with his family and he knows Teefy personally. He believes that it’s something that he really didn’t want to do.

“But you had ample opportunity to give me that straight man-to-man,” he says. “You didn’t do that. You waited for my back was turned. ‘Cause we from the same neighborhood, same part of town. We had that understanding, you know what, this ain’t for here.”

Master P tells Justin Hunte why he thinks President Barack Obama should pardon his brother C-Murder. It’s a crime P says his brother didn’t commit and he’s serving the time for it.

“I know Obama been pardoning people,” the No Limit boss tells HipHopDX during an exclusive conversation. “This is my letter to the President. When you look at Corey Miller, he’s not a bad person. He’s somebody that I love. Yeah, he’s not perfect. Maybe he did some things in his past, but right now, he’s in prison for a crime that he didn’t commit. The things that he did, he paid his dues for the crimes that he did in his past. Everybody has a childhood, nobody’s perfect. I feel like the system locked in on him and targeted him… Even to me he’s done some crazy stuff, but I love him. We’re blood.”

Elsewhere, following the passing of D4L member Shawty Lo, Fabo spoke with DX about the death of his friend and group member.

When Fabo heard the news, he says it broke his heart.

“He meant everything, especially in the 2000s,” Fabo says of Shawty Lo’s influence in Hip Hop. “This new wave we have comes from that time. Hip Hop in general, he’s one of the godfathers of the real street music that comes out today in regards to Trap. He also is the godfather of Snap because he put us out there. Without him, there would be no us. He meant a lot to the Hip Hop community.”

Kool Keith also chopped it up with HipHopDX about Marvel making a movie about him and addressed the youth of Hip Hop being dismissive of Hip Hop’s roots.

“That just means they don’t have an education,” he concludes. “There’s no proper education. They don’t really know the knowledge or who is who. They don’t know any better. They’re saying anything that comes out of their mouth without any research. A lot of them think they’re good. They come from an era of non-learning. The learning process they have is so poor. You hear the songs they make? They’ll stay in the chorus for 19 bars and maybe rap for like one-and-a-half bars. That comes from improper upbringing.”