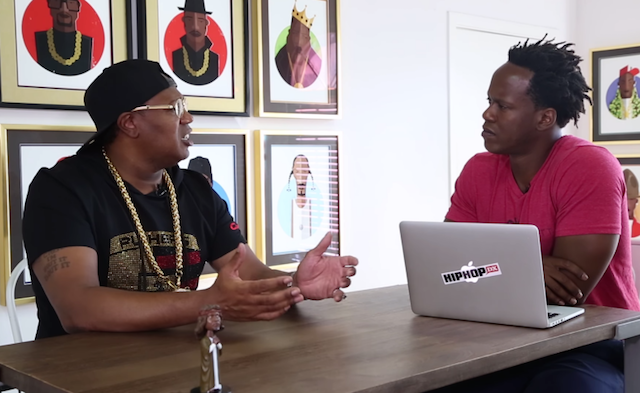 Master P On Why President Obama Should Pardon C-Murder

Los Angeles, CA – In Part 1 of HipHopDX’s exclusive conversation with Master P, music mogul weighed in on the contract dispute between Lil Wayne and Bryan “Birdman” Williams. The artist born Percy Miller expressed his sympathy for the fellow New Orleans’ natives and his hopes that the two reconcile.

“I think they’re eventually going to work it out because they’re hurting theyself,” Master P told HipHopDX. “They both losing money. I think Lil Wayne is probably one of the biggest artists in the world. Nobody’s gonna be able to take that away from him. I think that Baby built something from Louisiana and people got to respect that. Together they made something powerful. Now they just gotta figure out how to go separate ways with it. I’ve been working with Lil Wayne. I’ve got another record with him. Shout out to little homie. I definitely want to see him win.”

In Part 2, Master P opens on the incarceration of his brother Corey Miller [a/k/a C-Murder] and Mac who are both serving time in Louisiana’s notorious unforgiving prison system. In his own words, P explains to President Barack Obama exactly why Mac and Miller deserve to be pardoned.

Why Mac & C-Murder Deserve To Be Pardoned

“I got a brother in prison. I could’ve been there but I changed my mindset. He’s in prison for a crime he didn’t commit, but it’s the mindset. He named himself C-Murder. Back in the day I was like, ‘Dude, you can’t do that.’ I could’ve named myself something crazy, but I wanted to master what I do.

“I know Obama been pardoning people… This is my letter to the President. When you look at Corey Miller, he’s not a bad person. He’s somebody that I love. Yeah, he’s not perfect. Maybe he did some things in his past, but right now, he’s in prison for a crime that he didn’t commit. The things that he did, he paid his dues for the crimes that he did in his past. Everybody has a childhood, nobody’s perfect. I feel like the system locked in on him and targeted him… Even to me he’s done some crazy stuff, but I love him. We’re blood.

“In Louisiana, man, the judge should be indicted. The case should be opened back up because the judge did a lot of things. When you look at the judicial system in Louisiana, this guy got in to be the judge and he had to come up with a gimmick to win [election]: ‘This is how I’m gonna win. I’m gonna get all the criminals off the street.’ They took my brother off the street away from his family, his girls. I feel like Obama should pardon him because he’s been through so much. When he gets out, he’ll be able to inspire a generation because he’s been through so much. He’s kept his head up, even though it’s been hard, it’s been tough. It’s even been tough for me because, me going to visit him, in any moment someone could plant something on me—I don’t even do drugs or nothing—and say I’m bringing drugs and now my life stops. I can’t feed my family, my kids because I’m trying to go see my loved ones. The D.A. put out some stuff back in the days saying ‘P did this.’ I wasn’t even down there. That just goes to show you how crooked this system could get when they want you or they want to throw somebody away to look good, they do it.

“I think it’s the same thing that happens to a lot of brothers. There’s a lot of innocent people in prison. There’s a lot of people who should be in prison. They need to be in prison. I respect the judicial system. I also respect the police. It’s not about police. It’s about good people. When you put that badge on, you need to be a good person, just like they want us to change our life: ‘We’re in the streets. Do right.’ I’ve done that. I started off one direction. I have nothing to hide. But I changed my life. I feel like with my brother, he was the target, but I also feel like he put himself in a bad predicament just by living the life he lived. When he got an opportunity to change, he didn’t take full advantage of it.

“I also feel like after 10 years, a guy on a case that he didn’t commit and they’ve got cameras in the club, you’ve gotta let this man out. They’ve got witnesses saying it wasn’t him who did this. You can look on the camera and see who did it. Why are you not arresting that person? That’s why he should be pardoned because the evidence is there that he’s innocent.

“Mac is another one that should be free. They know Mac didn’t commit that crime. The kid’s mama knows mac didn’t do this crime. She came out and said it: ‘Mac did not kill my son. Why do you still have this man in prison if he didn’t commit this crime?’ Mac was on the right track. He was around the wrong people.

“I think that these lessons of taking these guys away from their families from their careers—their families can’t eat without them. They’re the head of the family. They’re the breadwinners. People are depending on both of them. I feel like they could actually change the way we see Hip Hop now. A lot of these guys we see in Hip Hop now haven’t been through no struggle or no pain. Their pain is gonna change the way you think about Hip Hop. Even the fans know it. The fans can tell this person hasn’t been through no struggle. They might have a hit record but it’s like instant grits: It won’t last. It’s not like soul food: You know what, I’m gonna fix you some food that’s gonna stick to your stomach. Soul food. That’s why I named my album Louisiana Hot Sauce, because we gotta put some of that real back out there. I think if Obama pardons Corey Miller and Mac, I really think he’ll be doing something big for our culture. I think getting they minds right, and what they’ve been through, they’re gonna be able to do something important for the next generation. I think they’re really going to feel the pain that they’ve been through. By Tupac dying young and us not having nobody to look up to, I feel like with C coming home and really been through something and still being alive, I think that people will really be able to take his message and receive it.

“The world is full of negativity. You’ve got people on every corner thinking that they the toughest of the toughest. I feel like that he could explain what he’s been through.That’s what the #BoutItChallenge is all about: Let’s put that energy into something positive. Hearing that from C would change the way this generation perceives reality. I try to give that to these same youngsters. A lot of them are getting big deals, big money. Bring us around because we’ve been through this. Don’t go find some new person that’s just telling you what you want to hear. They’re only telling you what you want to hear because they’re trying to get in your pockets. Guess what, if you got the right people around you, you’re gonna be saving money. Do you know how much Corey spent on legal fees? If he’d been around me and Silkk The Shocker he would’ve been good. Silkk’s living his life, doing the right thing. He’s able to be here and enjoy it with his family. I gave this life up because I wanted to be able to watch Romeo grow up and do the stuff he’s doing; watch Cymphonique; watch all the rest of my kids do what they’re doing now. You’ve gotta sacrifice and get the right people around you. I tell everybody to pay for a ‘No’ man. Get you the toughest ‘No’ man that you can find to keep your ass in line.

“Y’all can go and research. No entertainer thought that Obama was gonna win back then. I was on the frontline. I used to be around Obama like you and I sit around talking. I was like, ‘Man, you gonna have to get some real security because you’re about to be the President.’ I used to go on all the radio stations. As soon as the light came that Obama was about to win, all the fake celebrities started coming in crazy. Now everybody’s ‘Obama, Obama, Obama.’ Go check.

“I’m one of the first to give to Obama’s campaign. Me, Tyler Perry, and Oprah Winfrey. I was at Oprah Winfrey’s house. It was me, Tyler Perry, Oprah, Obama and his wife. There was no other ‘us’ that believed. I ain’t never been to the White House because I’m not a groupie. I did my part. I kept it 100. I ain’t never ask for no favors or nothing. Never. Even if he frees my brother, he’s freeing him because he should be free. If he did this crime then he shouldn’t be free. That’s just the truth. I’m just saying look into the case. That’s the only thing I’m asking Obama to do. I know you would pardon my brother because he’s innocent, not on me saying this. I’m just trying to bring awareness behind him and Mac and say look into these cases. You’re gonna see that it’s not right. I’m a person that believes in the man up above. It’s about doing what’s right. Somebody is going to figure out that these two cases are not right.”