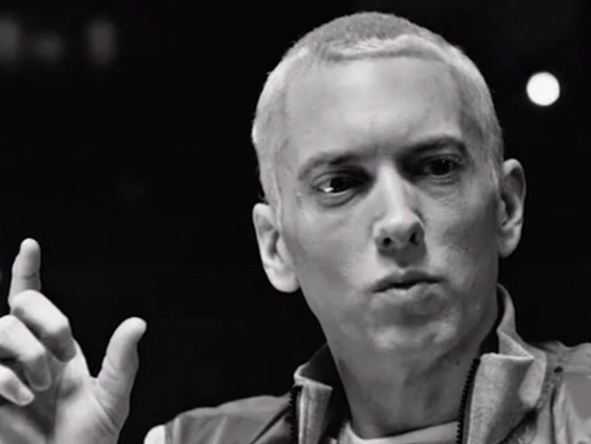 Los Angeles, CA – This week in Hip Hop, not only was it revealed that Suge Knight sent his goons after Eminem twice, Hot97’s Ebro Darden sparked rumors that Drake was after him next. Lyrically, that is. Elsewhere, Irv Gotti’s girlfriend was caught giving dome on Snapchat. Lastly, Joe Budden explains why he thinks Drake is lame and news of Lil Wayne’s suit against Universal Music Group being put to a halt surfaced. DX also hit up Hard Summer Music Festival for exclusive interviews with Flosstradamus and Ty Dolla $ign.

Eminem’s former bodyguard, Byron “Big Naz” Williams, revealed in an interview with the Murder Master Music Show that Suge Knight tried to kill the Detroit MC back in 2001 at The Source Awards.

“I had to snatch him up, I had to call Dre and his bodyguards and tell them what was going on because they was backstage, snatched him up backstage, called the limo driver,” he recalled. Big Naz, Dr. Dre and Dre’s bodyguards were on high alert the whole night.

Naz details the run-in in with the Death Row boss in his book, Shady Bizzness, which he describes as the sequel to Straight Outta Compton.

15 years later, Hot97’s Ebro Darden alleges he heard rumors that Eminem was getting ready to diss Drake and that had a conversation with the 6 God, who told him if true, he had something in the chamber for Eminem too. Naturally, the internet went nuts and the jokes, mostly aimed at Drake, went flying.

“There are really people who think Drake is a better rapper than Eminem?” one fan questioned on Twitter.

Turns out, it was all one big, fat joke.

“That video was not meant for the public but for only me and my ex which is causing conflict with my current relationship w Irv,” she wrote on Twitter.

Lil Wayne and his Young Money Entertainment company took Universal Music Group to court in March, claiming they weren’t compensating him royalties for his work with Nicki Minaj, Drake and Tyga properly. Reports show that he was seeking more than $20 million.

Now, he’s going to have to wait for that money as he resolves his beef with Birdman, who he’s taking to court for $51 million.

Joe Budden made a visit to Charlamagne Tha God’s MTV2 talk show “Uncommon Sense” and reveals some of the conversation he had with Drake over an Insta DM calling  everything about Drake’s behavior lame.

While he refused to say exactly everything that was said between the two privately on the social network, Charlamagne took it upon himself to reveal what Drake had sent to Joey.

“Yo Drake Insta DM’ed Joe Budden a picture of Joe’s face,” Charla recalls. “It was Joe’s own face and it looked like Joe was crying. It was the weirdest thing. He invited you to his show and told you to bring as many people as you want. And then he said, ‘I’m gonna pray for you and I hope you get through this.”

At the Hard Summer Music Festival, DX caught up with both Flosstradamus and Ty Dolla $ign.

Speaking with DX Media Editor Shirley Ju, the Chicago duo Flosstradamus divulges on how it was performing at Lollapalooza in their hometown and explains why they think old heads not approving the new wave of Hip Hop is a good thing.

“I think it’s cool because the one thing that we like to do and that we’ve done so far, is that the old heads if they start talking shit on you, like “that’s not the way it should be,” then you’re doing something right,” Autobot says. “I feel like that’s what’s going on in Hip Hop right now. There’s a bunch of old heads right now that are mad at what’s happening, and I think that’s the best thing. It’s pushing it forward and it’s making it fun again.”

Features Editor Ural Garrett got a chance to sit down with Taylor Gang’s Ty Dolla $ign to discuss politics and his upcoming project Campaign.

“It’s more than just a turnt up song for the club,” he reveals. “The whole project is a message. I got The Honorable Minister Louis Farrakhan doing some spoken word. I got YG, Vic Mensa and big features. You’ve already heard the ‘Campaign’ single with Future. I got my brother Meek Mill who made a banger. Don’t sleep on my nigga Meek Mill. That man has always been incredible. We got Trey Songz and Wiz Khalifa.”