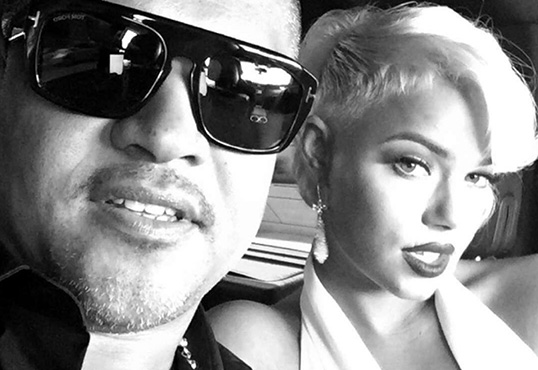 Model Ashley Martelle is a regular fixture on her boyfriend Irv Gotti’s Instagram feed, and he often appears on her socials as well, including her Instagram account that has more than 1.1 million followers.

On Snapchat earlier this week, footage appeared of her performing oral sex on an unidentified man. There are several reports that Martelle uploaded the video to Snapchat by accident and that the man featured in the video is her 46-year-old music mogul boyfriend, although Martelle has apparently refuted all of that.

As of publishing, her Instagram account was set to private, but The Shade Room, doing what The Shade Room does, caught a screenshot of Martelle’s response.

“Everyone makes mistakes and I’m working on fixing things and making everything right,” she wrote. “It was an old video and I hope everyone can move on from this.”

She also claims to be the victim of a hacker who uploaded the video and says it is not the first time her account has been compromised.

“Last night an old video of me was put out into the world and I can’t tell you how embarrassed I am. In over a period of time I’ve been dealing with hacking w my Snapchat and my emails,” she wrote. “I haven’t slept all night trying to clear things up with Snap on how to get my account back and also my iCloud.”

She wrote that the video was causing tension with her current man.

“That video was not meant for the public but for only me and my ex which is causing conflict with my current relationship w Irv,” she wrote.

#AshleyMartelle says the video of her giving sloppy toppy on #Snapchat was a result of her being hacked. Looks like the guy in the video isn't #IrvGotti after all.. Keep in mind you can tell the difference between a 'live' #Snapchat video, and an uploaded video. Thoughts #Roommates ? View earlier post

If you’re so inclined, the VERY NSFW video is here.

And here’s Martelle’s recent single, where she raps the line: “And if I’ma give him that superdome, bitch I might do that shit sloppily.”