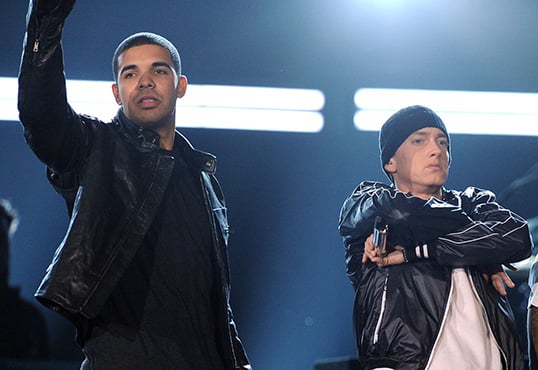 Be warned: this whole “Eminem is about to jump into the Joe Budden/Drake beef” buzz started with Hot 97 radio host Ebro telling a story about a conversation about a rumor that was, in the end, apparently just a joke.

It was such a joke and people ran with it… Slow news day. Drake got too much respect for all that… https://t.co/fzq1WnwRbb

Facts we was joking…
Talked about in jest & fools jumped out the window. I ain't even think it was a big deal https://t.co/xBbWkzjXMN

Ebro’s declaration that he’d heard a rumor that Eminem was coming for Drake — and that Drake said he was ready for him in the unlikely event that he did — set off a firestorm online, growing to large enough proportions that Eminem’s manager doused some water on it.

Even Drake appeared to address it on his Instagram with an eye-roll emoji and a caption that read, “If they don’t have a story these days…”

If they don't have a story these days…?

Joe Budden, whose critique of VIEWS and subsequent diss tracks was the original catalyst to the story, didn’t buy into the hype either.

Still, the Internet was definitely interested in talking about the potential of an Eminem/Drake beef and, who knows, maybe that interest will materialize into something. Opinion online leaned heavily toward the idea that Drake should stay far away from anything resembling a callout for Eminem, which may be the inspiration he needs to want to prove people wrong.

Here are some of the best reactions we found floating around online.

There are really people who think Drake is a better rapper than Eminem? pic.twitter.com/uvStgdip4m

drake ghostwriters when they heard @Eminem might be coming for him pic.twitter.com/JrGYiUwlcX

Visual representation of what Eminem will do to Drake if the diss track is true pic.twitter.com/72HPN5iOlL

before and after you try challenging Eminem to a rap battle ? pic.twitter.com/tH5zxb1DlB

Joe Budden approached Eminem like "Diss Drake for me bro, the Internet not taking me seriously" lol

Yo @Drake all trolling aside u my niga for eva cuz but if @Eminem jump in dis im outro! i care about my career i dont wona be another benzio

When the new generation think #Drake has a chance against #Eminem ? pic.twitter.com/0nYmPwTVIB

Eminem: Ay son, I heard you tryna challenge me….?
Drake: C'mon it was just a joke
Eminem: Better be! pic.twitter.com/mObiEcWZVR

Drake tryna slide out of that battle after Eminem says two words pic.twitter.com/n6fgYw4Oyj

If Eminem doesn't battle Drake to the shook ones pt II beat this is all a waste of time.

When someone says #Drake has a chance against #Eminem pic.twitter.com/o4URdvtIR6

Yo… This is gonna be sacrilege.. But… Guys.. Drake is actually wittier than Eminem.. And probably a better music maker..

@Drake THERE'S A WHOLE MOVIE ON WHY YOU SHOULDN'T BATTLE EMINEM. https://t.co/RwLA5dgdcw