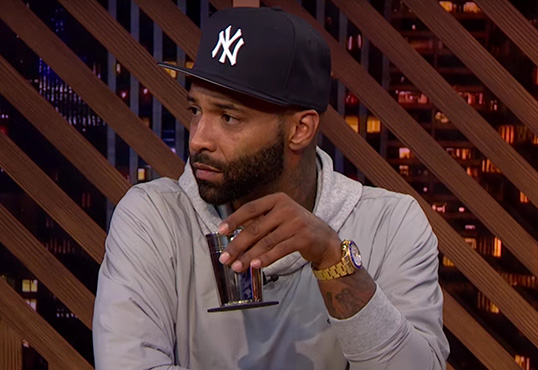 Joe Budden: "Everything About Drake's Behavior Is Lame"

Joe Budden continued his press tour detailing his interactions with Drake during their ongoing back and forth with a visit to Charlamagne Tha God’s MTV2 talk show “Uncommon Sense.”

Budden doesn’t mince words in the YouTube clip from the episode, saying “everything about Drake’s behavior is lame” about the Toronto rapper’s response to his diss tracks.

In the clip, Budden says he’s still unwilling to release screenshots of his private Instagram conversations with Drake, but Charlamagne, who has seen the messages, doesn’t hold back, providing specifics of what the OVO boss sent.

“Yo Drake Insta DM’ed Joe Budden a picture of Joe’s face. It was Joe’s own face and it looked like Joe was crying. It was the weirdest thing. He invited you to his show and told you to bring as many people as you want. And then he said ‘I’m gonna pray for you and I hope you get through this,'” the host said.

Budden gives his reasoning for not sharing the private conversation publicly, even though they could’ve helped make his case when many observers wondered whether the “beef” was all in Budden’s own head.

“I’m just from a generation that doesn’t behave like that. I just expect if I’m rapping at somebody for them to not DM me a bunch of soft stuff,” he said.

Charlamagne also gives his thoughts on the situation after having seen the DMs with his own eyes.

“The thing that changed my perception about Drake last year was the fact he handled Meek so Hip Hop. He handled it with bars. It looked real G,” Charlamagne said. “But when you showed me those Instagram messages he sent you in your DMs, it takes me right back to the guy who I think was, you know, using a little feather duster to tickle the bottom of people’s toes.”

“I’m not allowed to say that. You said it,” Budden responds.