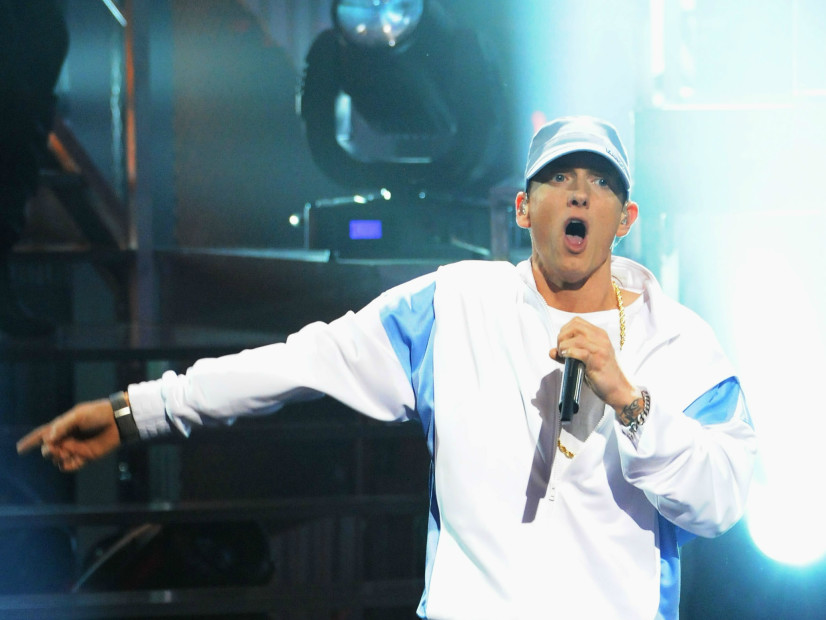 Suge Knight is notorious for intimidating nearly everyone in the music industry. Even now, the former head of Death Row Records sits in jail awaiting trial for murder and attempted murder after a hit-and-run incident in January 2015.

Not even Eminem was immune to Knight’s wrath as revealed by Eminem’s former bodyguard, Byron “Big Naz” Williams, in an interview with the Murder Master Music Show.

According to Big Naz, it all went down at The Source Awards in 2001 when Eminem performed at the event. The bodyguard knew his job was going to be a tough one that night.

“We were at The Source Awards and we all know historically in the past, The Source Awards, someone always got shot,” he says. “That was our first encounter with Suge Knight and his henchman. Em was going to his seat. The way they had the seating was all messed up and the bodyguards couldn’t sit with the artists. I think that was by design ’cause I think they really wanted the artists to be able to network with each other, but it also gives people who got beef with other artists to get at them.”

He saw a scene starting to happen in the middle of the aisle where Slim Shady was sitting.

“He’s beefing with all these guys in these red shirts,” Big Naz says. Knight is affiliated with the Bloods. “So I come from where I was at, I had to come back around, I noticed Em’s face changing, he’s turning like tomato red. There’s a sea of red guys around him. I had to bust through the middle man and snatch him up. Like, ‘Hey man what the hell’s going on up here?’ This is exactly what they said, ‘Death Row, motherfucker, Death Row.'”

Big Naz says that he confronted the goons and learned that Knight sent them to get into it with the Aftermath Entertainment signee and Detroit native.

“‘Man, Suge Knight sent us to strongarm him and it’s going down,'” Naz remembers them saying. “I was like, ‘Oh man, I just inherited the East Coast – West Coast beef.'”

He remembers running around trying to take control of the situation with Dr. Dre.

“I had to snatch him up, I had to call Dre and his bodyguards and tell them what was going on because they was backstage, snatched him up backstage, called the limo driver,” he says. “I said, ‘Look, I need you all to have that car around when I call y’all. But the way they had it set up, the limos can only stay seated for like 30 seconds at a time in front of the red carpet for security reasons. So long story short, we ended up going backstage, Eminem did his presentation and we had to watch out for guys backstage. So I pretty much had to have him stand behind me and I just had to be on knockout mode, man. So it was me, Dre, Dre’s bodyguards, we were in beast mode the whole time. So anybody that got anywhere close trying to get an autograph or trying to talk, trying to speak, they were gonna get laid out, man because that was the kind of atmosphere that was set up.” 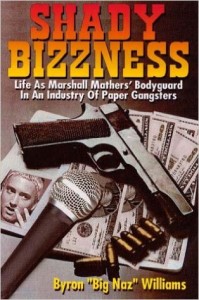 This is just one of the many adventures the bodyguard had with Eminem and he chronicles his time with the man born Marshall Mathers in his book, Shady Bizzness. Big Naz says that he is in the process of getting the book made into a movie and is the “closest I’ve ever been” to getting a deal in place. He says
that directors Danny DeVito and Ron Howard have reached out to him.

He details a meeting he had with producers in Hollywood and drew them in by comparing the film to the N.W.A biopic Straight Outta Compton, which set many box office records upon its release last year.

“I got a standing ovation,” Big Naz says of his pitch. “You know how I pitched the book, man? I said Shady Bizzness is the sequel to Straight Outta Compton. It’s the sequel, baby. The way it was written, it’s the sequel to Straight Outta Compton. Dre leaves Death Row, starts his own label, signs Shady, boom. It’s a continuation. You can’t avoid that. You can try to ignore it, but you can’t avoid that.”

Big Naz says he was part of the early process of Eminem’s classic film 8 Mile, but was blocked from further involvement by Slim’s team. He thinks he has a winning formula for an Eminem biopic because of the copyrighted material that is in Shady Bizzness that the rapper’s team cannot release without his permission.

“I own that. You can tell any other part of your life,” he says. “All artists, what do they always do? What do they always tell? When Prince passed away, Michael Jackson. They always go back to what? The beginning. You can’t tell the end without the beginning, baby. You gotta come to daddy. I’m daddy. You gotta come to me. And I’m humble enough to sit down and I’ve tried with them several times. I’ve reached out to them, ‘Look, I’m burying the hatchet. Let’s move forward. I don’t have no ill feelings t
owards y’all.’ I even went to Proof’s funeral. I’ve extended an olive branch more than three times. At a certain point, you have to step back, man, you have to step back. I got a lot of respect for them guys ’cause they know how to get money, but at the same time, I’m a businessman, too.”

Listen to Big Naz’s discussion about Eminem’s run-in with Suge Knight’s goons and the biopic based on Shady Bizzness in the clips below: