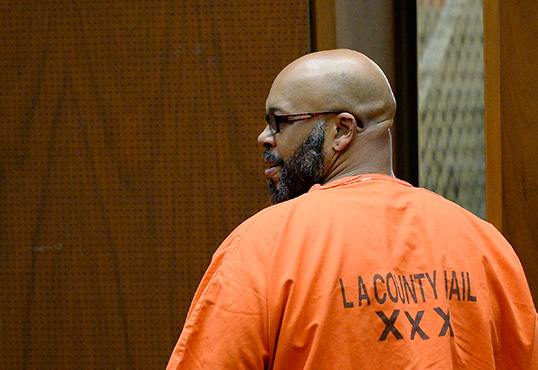 Los Angeles, CA – Suge Knight is reportedly battling with the courts again regarding his treatment in jail, this time over family visitation.

The rap mogul was supposed to receive a visit from his 7-year-old son yesterday, the New York Daily News reports. The meeting was set up last month when a judge signed an order to allow the visit. However, the child, Legend, and his mother were denied access to the jail where Knight is staying, even upon providing proof of the order.

“The county jail refused to allow the visit,” one of Knight’s lawyers, J. Tooson, says. “It’s incredibly frustrating. I don’t even know how to begin to deal with the unfairness.”

The visit was apparently blocked because of a policy at Men’s Central Jail where minors are not allowed in without supervision of an adult. The child’s mother, Toi-Lin Kelly, who is also engaged to Knight, reportedly tried to get on the order with her child, but was denied.

The former head of Death Row Records had his visitation and phone access cut off in February, a move that he and his legal team quickly fought, saying it violated his constitutional rights.

“He just wants the same rights afforded to everyone,” Tooson continues. “But the rules always seem to change when it comes to him. Regardless of the court order, regardless of how many times we go to court to advocate for basic fairness and equity, this happens.”

Knight has also had medical problems while sitting in jail for more than a year waiting for trial for murder charges stemming from a hit-and-run last January where he reportedly killed Terry Carter and injured two more men. He is supposedly on medication for a blood clot and diabetes and recently had a short stint in the hospital. There were concerns of a potential brain tumor last year.

“Everybody is extremely concerned regarding his health,” the attorney says. “That would be understating the level of concern. He’s a man presumed innocent until proven guilty, and to prevent him from seeing his young son seems like cruel and unusual punishment considering the court order and what we had to go through to get it.”

The mogul is due back in court today.