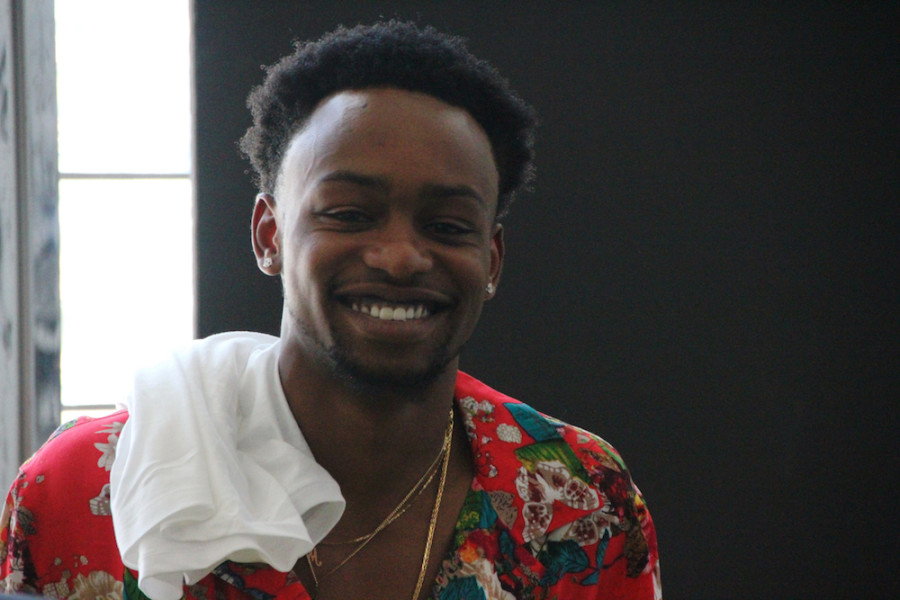 The phrase, “an idle mind is the devil’s workshop” is routinely used to describe the possible destruction caused by those without goals. Two years ago, Rob $tone had already decided music was his future. However, on one particular day, he was in the back of a San Diego police cruiser with him and a friend.

“They thought we was ’bout to rob this house,” disclosed $tone to HipHopDX on a comfortable couch inside Los Angeles’ new favorite boutique / hangout spot Young & Reckless. “We was going to, but it was a different house. I didn’t learn right away. It definitely woke me up like yo, nigga, I need to chill.”

A smoking session years prior with his homies outside of Morehouse College sparked $tone’s dream after hearing Wiz Khalifa’s O.N.I.F.C. track “Medicated” tell him “You can be anything you want.” He had been in Atlanta with both of his parents attempting to figure life out and attending Georgia’s Perimeter College before moving back West to the land of SeaWorld. The moment was probably replayed in his mind with the possibility of him losing freedom. $tone once experienced repercussions when he was suspended from high school for selling weed.

A studio in southern San Diego near the Mexican border is where he recorded a track that would forever change his life. Leaving the potential crime scene, one of his closest homies J.Davis later let him hear a beat produced by Purpdogg. The instrumental sampled a melodic whistle by Oscar Award-winning composer Bernard Herrmann. Used as the theme song for cult British horror film Twisted Nerve, the song became lifted by American pop culture thanks to Quentin Tarantino’s Shaw Brothers homage Kill Bill. Just so happened that the two-part action classic was a favorite of the Lemon Grove native.

The first song ever released on his Soundcloud shortly afterward, “Chill Bill” joins the likes of tracks including Fetty Wap’s “Trap Queen” and Young Greatness’ “Moolah” as singles gaining serious momentum online way before becoming pushed through the serious tastemaker circles. As of now, “Chill Bill,” which features his 1207 collective squadmates J. Davis and Spooks, managed to earn a staggering 17.7 million listens. “That’s when I knew it but, I was really geeked off the first hundred thousand” he added. “I was really geeked like I knew. That doesn’t happen in San Diego.” Meanwhile, the video, which dropped over a year ago in June has passed eight million views.

Longtime business partner of Hopsin, manager Mike Sherman, emailed him for a meeting after discovering him online. Eventually watching him perform in San Diego, he had to be a part of the situation. “Mike’s a go-getter and won’t let me slack,” added $tone. “He’s always on top of his shit.” This eventually led to a deal with RCA Records (which he signed on stoner holiday 4/20). Giving “Chill Bill” a major label roll-out, the single has reached over 10 million streams on Spotify.

Spending a couple of hours with $tone at Young & Reckless’s Melrose location, he watches promotional videos featuring the clothing line’s endorsers including Zoo Wap and Post Malone, shoots some hoops, tries on apparel and gives great recommendations on Netflix documentaries. There’s even a moment when he breaks down the life-changing moment when he witnessed Lil Bow Wow’s Snoop Dogg-assisted “Bow Wow (That’s My Name)” from his double platinum selling debut Beware Of Dog. “I was like five-years-old when I saw it on TV and that’s when I decided I want to be a rapper bro,” explained $tone. According to an interview with The Source, $tone’s father had a vintage record collection allowed him to form his style from classic reggae, Hip Hop, rock and R&B.

Clearly, $tone’s music has a more adult edge than his then-younger inspiration. Thus, he’s already getting love from the likes of Lil B and Joey Bada$$. Juicy J was even found freestyling to the “Chill Bill” instrumental. $tone was working alongside the likes of Denzel Curry, D.R.A.M. and even Chance The Rapper’s frequent collaborator Nate Fox in a song dedicated to his 7-month-old son entitled “Anything You Want.”

With a mixtape dropping very soon (possibly within a couple of weeks) and full-length album in the works, $tone is also working on a short documentary called Rush, which he can only describe as being centered around the rockstar lifestyle and hardships artists face from drugs to taxes. Then there’s this 1207 musical he’s creating with the collective and his 12th-grade art teacher. $tone also mentioned his “Chill Bill” follow-up is currently under the title “Vintage Couch.” His rise may not be noticed by many and he understands that, but it doesn’t stop him from having goals of world tours along with the money and fame.