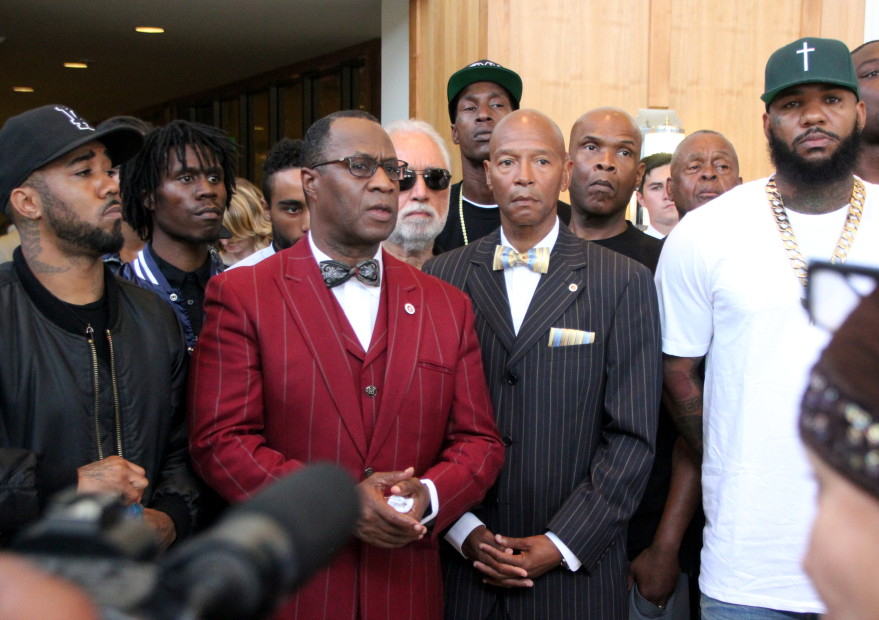 Shortly after Snoop Dogg and The Game’s peaceful rally to the Los Angeles Police Department, Operation H.U.N.T. (Hate Us Not Today) made another call-to-action for all their local hood gangs to congregate at a South Los Angeles community center, where the Nation of Islam would also be making an appearance represented by Minister Louis Farrakhan.

“On behalf of myself @SnoopDogg, & the honorable @louisfarrakhan I want to extend the invitation to all CRIPS, BLOODS, ESE’s & all other gang members, major figures & GANG LEADERS from every hood in our city as well as the surrounding cities to our meeting,” The Game captioned under the invitation on Instagram.

The topic of discussion during the symposium was how to become better role models for the youth in these neighborhoods and how to make the area a safer place.

They had a great turn-out, with overflow as some attendees who couldn’t get into the center watched the proceedings on a huge screen outside.

“It’s beautiful out here today people & together we are going to makes waves in the direction of saving this city & others from the re-occurring plague of death here & worldwide,” The Game wrote. “Be apart of the solution….. I’ll lead the way.”

Problem was also at the scene as members of the rival gangs took an oath to stop using violence except as a means of self-defense, stop the abuse of women, including the use of “the B word,” and stop the use of drugs “or that which is destructive to my health and well-being.”

We each have to take the initiative to create change within ourselves before we can ask anyone else to do so….. I am responsible for myself & I offer my hand to anybody from anywhere to shake it…… I LOVE ALL MY BROTHERS & I want you to LIVE homie….. If you feel the same way, reach out & extend your hand to someone & let's alter our futures one person at a time !!!!! I signed it 1st……… The opportunity to save lives is yours too if you want it……. OUR CHILDRENS FUTURE IS AT STAKE #HUNTmovement #LosAngeles #JusticeOrElse #NationOfIslam #CityOfRefuge #UnitedInPeaceFoundation #TheWayToHappiness #Crip #Blood #Ese #CeaseFire #BlackAndBrownPride [TAG SOMEONE IN THIS POST & LET THEM SEE WE ARE TOGETHER & THEIR LIVES MATTER TO US AS WELL] & I WILL ASK EVERYONE BELOW THAT WILL COMMENT NEGATIVELY & HATE…. WHAT THE FUCK ARE "YOU" DOING TO HELP ???

Good morning world. I hope everyone slept well….. Los Angeles, on behalf of myself @SnoopDogg, & the honorable @louisfarrakhan I want to extend the invitation to all CRIPS, BLOODS, ESE's & all other gang members, major figures & GANG LEADERS from every hood in our city as well as the surrounding cities to our meeting 11am this morning, July 17th at 8039 S. Vermont Ave Los Angeles, California 90044 to have the much needed conversation amongst ourselves about our influence on the youth in our respective neighborhoods & how we can serve as better role models to them & the brothers we stand beside daily…. Because the sad truth that no one wants to face is, before we can get OUR LIVES TO MATTER to anyone else… We have to show that OUR LIVES MATTER to US !!!! WE have been responsible for more of the KILLING of ourselves than anyone else by a long shot & the percentages in which BLACK on BLACK, BLACK on BROWN, BROWN on BLACK, BROWN on BROWN murders are so fucking high verses any other killing of us that it is disgusting & this needs to be addressed & laid to rest !!!!! Don't think we can't change it & better ourselves, lead by example & make our city a safer place for our children…. Because together, WE CAN !!!! I'm asking everyone who will attend: DO NOT bring any weapons or anything illegal. Do not come high or belligerent.. We don't need any HOT HEADS or anyone there for the wrong reasons or you will respectfully dealt with & REMOVED from the building… We will stand as we are, UNIFIED. I'm calling ALL GANGS, of ALL RACES, ALL GROWN MEN affiliated or not & WE WILL STAND UNIFIED SUNDAY !!!! Our numbers are all the weapons we need !!! We do not need to be dumb, retarded or uncivilized Sunday… ALL WE NEED IS EACH OTHER… I will not lead any of you into a trap !!!!! LET'S do the opposite of what we've been doing & show the world that we are MORE than the problem… Thank you – Game

For those who couldn't get in because of the amazing turn out… We got a huge screen for them to take part in what's going out out here… It's beautiful out here today people & together we are going to makes waves in the direction of saving this city & others from the re-occurring plague of death here & worldwide. Be apart of the solution….. I'll lead the way. #HUNT #LosAngeles