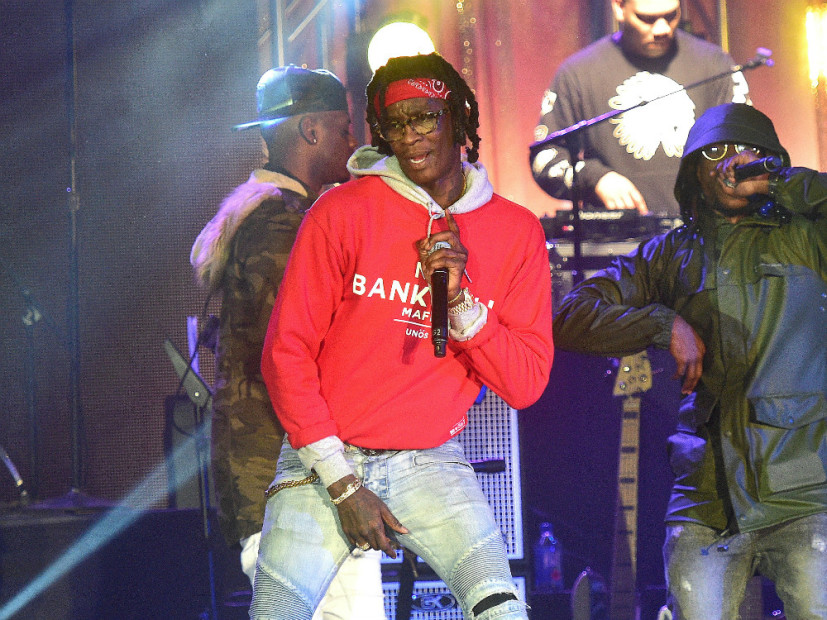 Young Thug really doesn’t want to torture Charlamagne Tha God, or at least that’s what he is now saying. The Atlanta rapper took to Twitter today (April 26) to retract his threats against the radio personality after threatening to “beat the fuck outta you.”

“I wouldn’t ever put my hands on a radio guy, to small for me/for me,” Thugger writes.

Earlier on The Breakfast Club today, Charlamagne responded to the rapper’s threats.

“Who wants to go out in the streets and you got Young Thug saying he’s gonna torture me?” he said. “I don’t wanna get tortured by Young Thug.”

He then laughed that being tortured by the Rich Gang member would involve “blunts and penises.”

Young Thug made the initial threats after Birdman walked out on an interview with The Breakfast Club after demanding that the radio hosts respect his name.

I wouldn't ever put my hands on a radio guy, to small for me/for me

Charlamagne Tha God says he wants nothing to do with Young Thug after the Atlanta rapper threatened to torture him. In a clip from The Breakfast Club posted today (April 26), the host says that he spent his weekend watching boxing, Beyonce’s LEMONADE and memes from Birdman’s fiery appearance on the Power 105.1 show instead of looking for trouble.

“It was a great weekend to be in the house,” he says. “Who needed to be out in these streets? Plus, who wants to go out in the streets and you got Young Thug saying he’s gonna torture me? I don’t wanna get tortured by Young Thug.”

Thugger took to Snapchat after Birdman walked out of his interview, demanding the hosts, Charlamagne, Angela Yee and DJ Envy respect his name. The Slime Season rapper warned that Charlamagne was going to “make niggas torture you” and “gonna make us beat the fuck outta you.”

In the newly published clip, DJ Envy asks Charlamagne what kind of “torture” one should expect from Young Thug, who often wears women’s clothing.

Listen to the clip of Charlamagne addressing Young Thug threatening to torture him below:

Young Thug is defending Birdman after the Rich Gang leader stormed out of an interview with The Breakfast Club today (April 22). Before the interview began, Birdman told hosts Charlamagne Tha God, Angela Yee and DJ Envy to respect his name.  When the interview began, he refused to answer their questions, got up and left the room.

Thugger took to Snapchat to threaten Charlamagne for his treatment of Birdman.

The radio personality has yet to respond to Young Thug’s comments at time of publication.

Young Thug and Charlamagne got into it as part of the Atlanta rapper’s beef with The Game when he defended Lil Wayne against Thugger. At one point, the Slime Season rapper called The Breakfast Club “the devil.”

Birdman and Young Thug were named in an indictment as conspiring to kill Lil Wayne when Weezy’s tour bus was shot at last year.

Rich Gang is slated to drop The Lifestyle 2 on July 1.

Watch Young Thug’s Snapchat post where he threatens Charlamagne over Birdman below via DJ Akademiks: