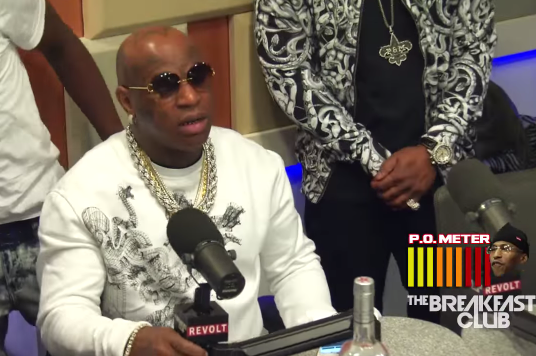 New York City, New York – Like several artists before him, Birdman arrived to his Breakfast Club interview with a chip on his shoulder regarding how the top-rated radio show portrayed his image.

However, the well-known music mogul did himself no favors in the eyes of his detractors by cursing out Charlamagne Tha God, Angela Yee and DJ Envy and then refusing to take his gripes on air.

“I want to start this shit off straight up, stop playing with my name,” the visibly PO’ed Cash Money Records boss told the Breakfast Club crew, repeatedly ignoring the request to address his issues when the cameras starting rolling. “Nigga, when my name come up, respect it. Stop playing with my fucking name.”

Although Birdman never explicitly stated what the nature of his issues were, Charlamagne tells us it was most likely last year’s Rick Ross and Trick Daddy interviews where “his name” was the butt end of several jokes and topics, which resulted in him festering to the point where he couldn’t conduct himself accordingly. By the time the interview had officially started, the 47-year-old mogul was stuttering with a shaky voice as he prepared his words.

“I wanted to see yo,” Birdman said to Charlamagne adding, “I wanted to talk to ya a man in yo face ya understand me? I knew a few places you were at but [I didn’t] think that was gangsta. I wanted to look you in your face like a man and tell you how I feel.”

When the question was poised how come he didn’t “pull up” on Rozay and Trick Daddy Dollars in a similar matter, Birdman hit back with the swift rebuttal: “I’m pulling up on you, nigga.”

And then, it was over. Birdman donned his sunglasses, assembled his entourage and stormed towards the exit door.

A nonchalant Charlamagne quipped “Grand opening, grand closing” while Angela Yee looked over her wasted research in disbelief. There were several key topics on the table to discuss (most notably Lil Wayne’s future with Cash Money) but it appears those will be answered at another place and time.

Birdman’s microwave time Breakfast Club interview can be seen in full below.