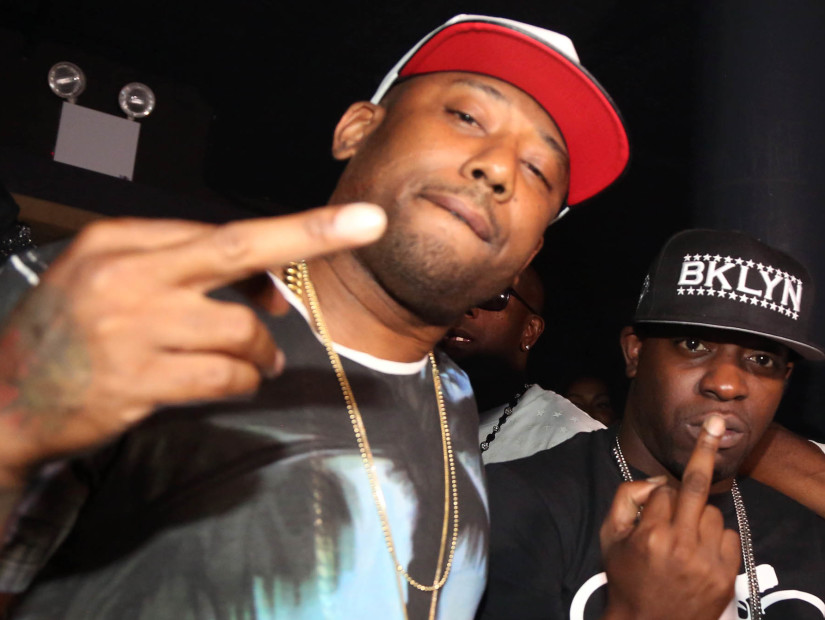 Hip Hop, for many fans, is a competitive sport. The need to be number one is always the endgame in many aspiring rappers’ minds. Sometimes that can spill over into beef with reasons ranging from misunderstandings to serious allegations against artistic merit. Leave it to some, Hip Hop’s birthplace New York hasn’t been the same since the rise of one atomic bomb in 50 Cent. Before MC Shan and KRS-One reignited their 30-year-old beef this year, Ghostface and Action Bronson had issues in 2015. Even this year, Joey Bada$$ and Troy Ave is getting more intense by the moment. Veterans including Fat Joe and Styles P have all tried to ensure cooler heads prevail. Taking things a step further, Maino and Uncle Murda have joined forces for their recently released Yellow Tape: King Kong & Godzilla. Those who’ve followed the two for the past decade understand their street bromance as they’ve collaborated with each other on numerous occasions anyway. For their first official project together, they’ve kept it a light affair with features from Manolo Rose, Tweezy and Meet Sims. Maino and Uncle Murda may be helping steer the city in the right direction.

Taking a few moments with DX, both discuss a crazy moment during the recording of Yellow Tape: King Kong & Godzilla, New York’s lack of unity and being a fan of each other’s music.

“It was long overdue. We were supposed to have been did that. We been talking about this and I was a little late on the ball. I don’t want you guys to think we’re following what everybody else is doing. Because my brother been saying we need to hurry up and do this. It was just the right time as far as our individual projects.” – Uncle Murda

“That’s just put that energy together. We got to a place where we both recognized that we were both becoming staples in our city individually. It’s like, we’re not going anywhere. So why not?” Some of the energy put it all on us. I just think it’s something for my city New York. It needed to see two powerhouses stand together and do something really dope. I don’t think when it comes to this street gangsta music, nobody can do what we can do. To step into that lane, it was necessary. A lot of times, my city gets a lot of flack for not being unified. So, we wanted to show people that we are unified and we can do a project together” – Maino

“We had two bitches in here eating each other out while we were putting together records. I’m dead ass serious.” – Uncle Murda

“And we did every record together. No back and forth through email about verses. We recorded about 14 and we put them all on there. It took a few months. Not that long. It’s really about us and we didn’t want to share that. It’s not about the big features and all of that. Murda has a song out with Future, so we know we could do those” Maino

Being A Fan Of Each Other’s Music

“We come from Brooklyn and we all came up together. At the end of the day, not only is the homie my friend, but he’s a fan. We’ve been doing music together for ten years straight. Just connecting with each other. I’ll call him out of nowhere and ask, “Why you say that?” – Maino

“He just broke it down. Besides being homies, we’ve been working with each other forever and been fans of each other’s shit.” – Uncle Murda

“I don’t think those opinions on that came from any specific place. New York is the birthplace of Hip Hop and it’s very competitive. I think Hip Hop was birth in a competitive nature. Just by nature, New York is big. Our boroughs are the size as cities. It’s just that we’re extra competitive and that can lead to animosity. That’s why we wanted to show that we can be who we are individually and still come together to unify and stand up” – Maino