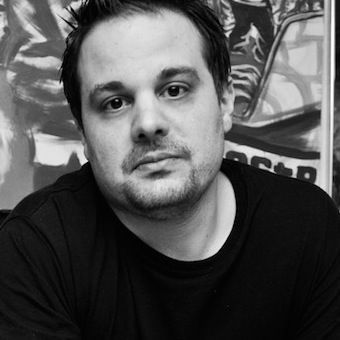 Goodbye Tomorrow, a collective from Chicago, Illinois, remains anonymous. By this, they purposefully keep their identity mysterious. Not sure if it is a rapper or a producer, or both, and we may never find out. Their latest track “Jay Z” drew a lot of attention, with its eccentric beat and Hov-inspired lyrics. The trippy vibe of the music video itself is a perfect reflection of the group and what they represent.

The group itself is affiliated with Rostrum Records, home to artists Wiz Khalifa and previously Mac Miller. HipHopDX spoke with Pittsburgh producer E.Dan, who discusses working with the collective. He is producer and mixer for ID Labs, a Pittsburgh based recording studio and production team (consisting of E.Dan, Big Jerm and Sayez) that has worked closely with Rostrum Records and their roster over the years.

E.Dan detailed how Goodbye Tomorrow flew on to his radar. They have been working for a year and a half. While he is not actually a part of the group, he called himself their “musical advisor.” When he connected with them, they had just wrapped up their album A Journey Through the Mind of a Non Believer. Featuring standout tracks “The Way” and “Goodbye Tomorrow.” The 12 track project is available now.

DX: What is the intention between Goodbye Tomorrow remaining so “mysterious?”

E.Dan: They don’t want the message to be any one of them as individuals. They look at what they’re doing as more of a collective- a whole effort between everyone that’s involved. They never want the focus to be on any one person. That lead to being a little mysterious or ambiguous because naturally people are going to focus on the rapper or producer. They want to make it a bigger movement surrounding the guys doing the music and creating the visuals, the other people involved.

DX: So it’s on purpose? Are we waiting on something?

E.Dan: I don’t know. That’s definitely a question for them. They’re not interested in a big reveal necessarily. I’m not sure how they will answer it.

DX: How would you describe their sound?

E.Dan: Hmmm. I would categorize it as versatile, a mix of very modern Hip Hop and R&B. I hear so many [things] when I listen to them. What attracted me to them was they got a pretty broad range I feel like. I’ve heard little elements of The Weeknd and somebody like Drake. Musically you hear stuff that would work on a Travi$ Scott album- not to say they necessarily sound like any of those people, but i hear all those. To me, it’s a rap album/project. It’s intricate and to me, it’s got a little bit more going on than your average rap album. They spent a lot of time, [hence] a little more elaborate songs.

DX: What inspired the track “Jay Z”? Has Hov heard it?

E.Dan: The album as it stands was done. My only involvement with them musically was the final phase of mixing and touching up a few things here and there. 98% was of the album was pretty much already done by the time I had found them and started talking to them. I don’t have many background knowledge of any of the songs.

DX: How did the connection at Rostrum Records happen?

E.Dan: That was where I came in. I honestly just sort of randomly found them on Twitter. Someone shot me a link. There was a couple of nights where me and the publicist for Rostrum sort of did a Twitter casting call. We had people send links and music, and they were one of the guys. A friend of theirs submitted something. We were sort of just going through links. The one that i heard was “28” on the project, an older version of it. I heard that and immediately hit them up via Twitter. We were talking to them, and it was a good six months talking to them on and off- seeing what they were doing. Then Benji from Rostrum got involved and decided he wanted to make a move and sign them.

DX: A look at their Instagram and people may mistake them for a video game. How do you feel social media plays a role in their career?

E.Dan: I think that they’re definitely trying to carve out their identity. The whole Windows 95 theme and the video game kind of stuff is definitely their efforts and distinguishing themselves. The reason behind it, I don’t know.

DX: How many are producers and how many are rappers? What are the dynamics in the group like in and out of the studio?

E.Dan: I’d love to tell you, but they get a little cagey about it. I don’t wanna tell anybody anything they wouldn’t say. I think you should definitely talk to them directly at one point. Working with them was great. They came out to Pittsburgh to cross some T’s and I’s on the album. They lived in the studio for a couple weeks while we finished up. They are really low key humble guys. We really just had fun and put the final touches on the record. It wasn’t anything too crazy or out of ordinary. They’re pretty great guys to work with. They have a pretty solid vision of what they want- it makes those kinds of things, those scenarios go smoothly. There’s not a lot of second guessing. They’ve got the vision down before they lock the door.

DX: Who do you listen to? Who inspires you?

E.Dan: Broadly speaking, I listen to everything. I was listening to Travis Scott earlier. I have an enormous collection of actual records that spans the history of music. I could never pinpoint it. I try to stay current and listen to what’s going on now. I probably spend more time listening to stuff I’m actually working on.

DX: What can you tell us about Mac Miller’s latest project? K.I.D.S was actually one of my favorite mixtapes.

E.Dan: It was a really long intense process. We’ve been working with Mac since before K.I.D.S, it’s been real crazy to see him go from where he began as an artist and rapper, to where he is now. I’ve just been really impressed with his dedication to it as a craft, as a rapper. Such an effort, to just get better at what he does. He had a lot of critics early on, mainly for what he was doing, or not doing lyrically. He was up against the fact that he was a white rapper. We all sort of put you in that position of being scrutinized, which we maybe should. He took a lot of that to heart. I feel like he just spent the last few years doing everything he could to hone his craft as a rapper. What he does now lyrically, is a whole another level. I have a lot of admiration for him. I respect him for just taking the craft so seriously and doing everything he could to the next level as a musician. This album in particular, he feels like it’s his showcase to where he’s at now and where he was then. He recorded a lot of music.

DX: I saw he tweeted he made eight albums worth of new music.

E.Dan: Eight albums; it’s not really an exaggeration. Throughout the last few years, he said a few times “I got the album.” He’d tell me what it was called, show me the tracks. Six months later, it’s a different title, another 15 tracks. That went off time and time again, until he landed on GO:OD AM as an album. Up until the last week, we were working on it. He was doing brand new songs. He’s never really stopped recording. Eight albums- if he spread it all out.