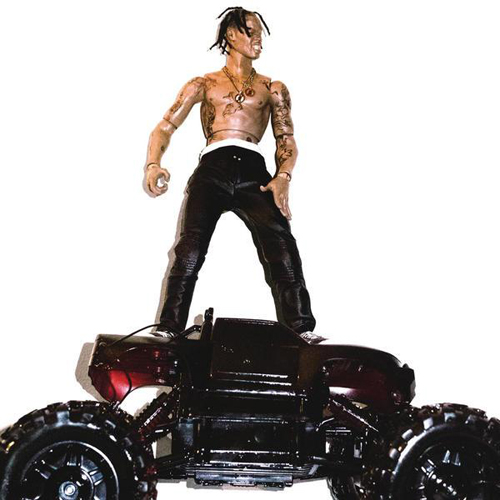 `Since being discovered, the Houston emcee/producer Travi$ Scott has been a purveyor of the trap hop sound that combines elements of gangsta rap lyrical pacing with experimental production and of course that Houston chopped and screwed influence gravy.

On his first album, the 23-year-old knows where his bread is buttered, and keeps that sound close by whilst going further off the map than he has in the past. Be it increased confidence, clout or just spending more time with generation defining musicians, he has found a way to stay true to his sound while all along exploring newfound sonic and musical territory.

For this initial “for sale” project, the expectations were as high as they can be. Co-signs from T.I. and Kanye West have that ability to function as a gift and a curse. Pair guest appearances from Justin Bieber, The Weeknd and Toro y Moi and a pushed back the release date, the anticipation merged with a feeling of “What will this sound like” reached fever pitch.

Early tracks like “Pornography,” “Oh My Dis Side” and one of two lead singles “3500” are true to the sound that has been expected from the spitter born Jacques Webster. However, Scott leaves the confines previously occupied pairing interesting changes in pace with unique sonics under the whim of his drawl.

The strong points of his independent sound are still there, autotuned psychedelia and Texas lean. The stakes are higher and this is evident earlier with top-notch production that keeps the listener on their toes when the primary track switches from a dense booming beat to pianos with layered synths. The first to discover Webster, T.I., uttering in spoken word tone “The story of the bastard was never told/ The soul of the bastard was never sold/ Can he survive? Or could he fall in love?/ Living like a bronco, lifestyle wild and untamed” only adds to the mood. Pairing an homage to his rodeo theme that has now spanned a mixtape and an album with an homage intro from an acclaimed emcee, we are prepped for the most profound effort by a young hip-hop artist with lots of potential and a lot to lose.

The album’s early offerings from the autotuned “Pornography,” the incredible utility of The Weeknd on “Pray 4 Love” to the thumping rock n roll battle hymns of “Piss on Your Grave” featuring  West keeps the listener engaged to the sonics that have brought Travi$ this far whilst maintaining a varied sound that gives each track individuality.
Rodeo‘s back end after “Antidote” begins to mesh together and gets repetitive. Of course, this is a familiar symptom of debut albums and of the trap style sound Scott is purveying. Nonetheless, the originality of Scott’s sound within this new movement provides for a strong rookie effort leaving the listener excited for a career that is just getting started.