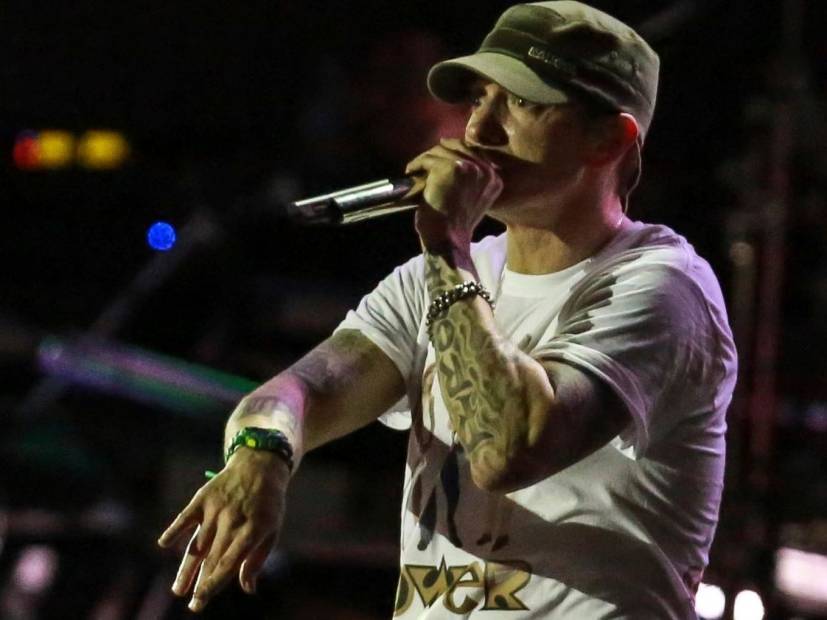 Eminem pulled off another surprise album drop on Thursday night (January 16) with the arrival of Music To Be Murdered By.

The 20-track effort, which was inspired by the master of suspense Alfred Hitchcock, boasted features from several notable guests, including Royce Da 5’9, KXNG Crooked, Black Thought and Q-Tip. Unlike 2018’s Kamikaze, Em pays tribute to a laundry list of his Hip Hop heroes — from Invisibl Skratch Piklz and LL Cool J to Del The Funky Homosapien and De La Soul.

While many fans anxiously tried to find any semblance of an overt Nick Cannon diss buried in the layers of double entendres and rapid fire verses, it simply didn’t exist. However, there were a few blatant jabs at a few other artists that were immediately obvious as well as a couple of other mentions worth noting simply due to their previous history with Em.

Lord Jamar has been an outspoken critic of Shady for years, but the feelings are mutual. Em doesn’t really care for the Brand Nubian MC either. Just like he did on the Kamikaze track “Fall,” Shady sent a shot in Jamar’s direction once again.

“Got a crown of thorns, but it won’t fit around the horns/But I’ma keep it a buck like a dollar store/I’m more than you bargained for and I am far more worse/Than a forty-some bar Lord Jamar verse.”

A new Eminem album wouldn’t be complete without at least one stab at Machine Gun Kelly. Their beef popped off in 2018 after Em dissed him on the Kamikaze cut “Not Alike” and the “Rap Devil” madness quickly followed. On “Yah Yah” featuring Royce Da 5’9, Black Thought, Q-Tip and Denaun, he essentially claims he birthed the Cleveland rapper.

“As you can see from the ring that I’m wearing/Me and this game we got married/Already had the prenup ready/Shoulda seen her belly/She was barely three months pregnant/She gave me a baby/We named it Machine Gun Kelly.”

Speaking of MGK, Em also provides an update on their longstanding beef on the song “Unaccommodating.”

“But when they ask me is the war finished with MGK? Of course it is/I cleansed him of his mortal sins, I’m God and the Lord forgives even the devil worshippers/I’m moving on but you know your scruples are gone when you’re born with Lucifer’s horns.”

It might not be an audible diss, but Em did a track with all of Slaughterhouse — minus Joe Budden. If that’s not a subtle slight, what is? Nevertheless, Joell Ortiz, Royce Da 5’9 and KXNG Crooked stepped up to the plate and delivered.

Of course, this isn’t the first time Em has set his sights on Budden. He called out the popular podcast host on Kamikaze as well, spitting, “Somebody tell Budden before I snap, he better fasten it/Or have his body baggage zipped/The closest thing he’s had to hits is smackin’ bitches/And don’t make me have to give it back to Akademiks/Say this shit is trash again, I’ll have you twisted/Like you had it when you thought you had me slippin’ at the telly.”

“Lock It Up” f. Anderson .Paak

Eminem is apparently still bothered by Budden’s criticisms of Shady’s 2017 album Revival. He comes for him again on “Lock It Up” with the line, “Try’na save at Kroger, so why would I give a fuck about back-stabbin’ Trader Joe for?”

Yes, it’s minimal, but Em does mention Kanye West for a split second, sending a subtle slight toward Calabasas.

While it’s not classifiable as a straight up diss, Em does throw a little shade at Macklemore’s perceived squeaky clean image and cushy upbringing on “Leaving Heaven.”

“OK, so while Macklemore was keeping his room nice and neat (Yeah)/I was getting my ass beat twice a week (What?)/Looking for a place for the night where I could sleep (Yeah)
Flippin’ sofa cushions over just tryin’ to see/If I could find some change and scrape up for a bite to eat.”

Em caught plenty of flak for calling Tyler, The Creator a homophobic slur on the Kamikaze song “Fall.” In an interview with Sway Calloway, he admitted he was “in his feelings” when he wrote that line.

Em touches on the situation again on “No Regrets.”

“Misplacin’ my anger enough to give Earl and Tyler, The Creator the brunt/Shoulda never made a response to the disdain for the fake ones/Them traitorous punks, ’cause snakes are just cunts/They can get fucked with eight hundred motherfuckin’ vibrators at once.”