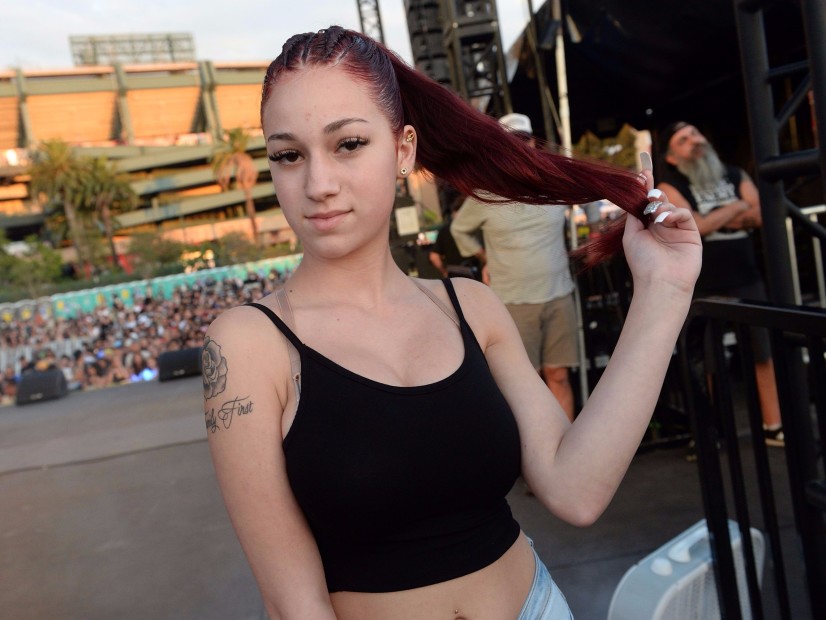 The music community uttered a collective “WTF” on Friday (September 15) when it was announced the mouthy 14-year-old from the Dr. Phil show — Danielle Bregoli — signed a deal with Atlantic Records.

The Florida native, who coined the catchphrase “Cash me ousside how bow dah” during her infamous appearance on the daytime talk show, is now going by her rap moniker Bhad Bhabie and recently dropped her video for “These Heaux.”

The song managed to land at #77 on the Hot 100, and the aforementioned video has racked up over 26 million views on YouTube. Her Bhad Bhabie Instagram account boasts 11.3 million followers.

Meanwhile, Cardi B, who got her first taste of fame on Instagram and then as a star on VH1’s Love & Hip Hop: New York, has exploded with popularity after her summer anthem, “Bodak Yellow,” went viral. The success of the song has launched her into a new stratosphere of celebrity (it currently has over 154 million views on YouTube and sits at #2 on Billboard’s Hot 100). It’s also reportedly on track to hit #1 on the Billboard Hot 100 next week.

Consequently, the former Bronx stripper is everywhere — from a recent MTV Video Music Awards performance to her appearance at Rihanna’s Diamond Ball charity event last week. She’s currently prepping her debut album, which will also be distributed by Atlantic Records.

LOOK AT ME BARDI !!!!!! Thank you everybody.Thanks too all my friends and fans for sharing .Ya Truly show me who really down and care for me !!!!!!I love you sooooo much you skanky hoes ❤️

Taking it a step further, we have Blac Chyna, another stripper-turned-reality television star (turned rapper?) attempting to kick off a music career. She reportedly has Yo Gotti, Tory Lanez, Jeremih and Rae Sremmurd’s Swae Lee ready to jump on her album, which is supposedly being spearheaded by Capitol Records.

The mother of Rob Kardashian’s child rose to fame after Drake name-dropped her on the single “Miss Me” featuring Lil Wayne in 2010. Her Instagram popularity, relationship with Tyga and short-lived reality show with Kardashian, E!’s Rob & Chyna, only increased her visibility. She now boasts 11.3 million Instagram followers.

But is this type of insta-fame really sustainable? Are we going to hear about Bregoli 20 years from now and celebrate her homogenized, heavily Auto-Tuned rap? Will Cardi manage to keep up the dizzying pace that took her from reality show character to overnight superstar based on one hit single?

My guess? Probably not.

The fact that female Hip Hop artists like Ill Camille, Rapsody and vets like Digable Planets’ Ladybug Mecca and Bahamadia  — women that can actually spit well-crafted and intelligent lyrics — are not properly celebrated or elevated to top tier status is further evidence that talent doesn’t mean shit these days. It’s more about marketability, sex appeal, provocativeness, scandal and those social media numbers.

People were in near disbelief when news of Bregoli’s deal hit the web and quickly took aim at Atlantic Records.

Is Atlantic Records having a "How Many horrible female rappers can we sign within a year" contest?? pic.twitter.com/yfXeJAnfWr

These are the execs at Atlantic Records who signed the "Cash me outside" girl to a REAL record deal for when u ask "who did this to music?" pic.twitter.com/hubeESbRXC

You should look up William Hung on Wikipedia. https://t.co/E5NHFEWTiB

But alas, these are the times we’re living in. Aspiring artists — male and female — don’t need to hit the streets hustling demos hand-to-hand nor do they have to pay their dues playing underground shows to tiny crowds before a record label finally takes notice. While a quick viral hit may sound like the easy route, the likelihood of one artist having multiple back-to-back viral hits to sustain a long career is about as likely as spotting a unicorn.

There are seemingly endless undiscovered artists out there that have more talent than Bregoli could ever dream of, but she has a record deal, reportedly worth millions of dollars.

Producer Ferrari Sheppard, who worked on the Dec. 99th project with Yasiin Bey (fka Mos Def), called out Bregoli for being a culture vulture.

“Cash Me Outside girl’s ‘hood’ accent is fake,” he wrote on Saturday (September 16). “She’s basically mocking black people. She has a recording contract.”

Cash Me Outside girl's "hood" accent is fake. She's basically mocking black people. She has a recording contract.

Price of the duo Audio Push, who co-wrote “These Heaux,” begs to differ. He believes her authenticity is what makes her “marketable.”

“She’s as raw as the music is,” Price tells HipHopDX. “She really has been in legal shit. She’s fighting cases and doing real life shit that half these rappers rap about and they’re not doing. That’s a fact. Of course, she has a huge following and she’s actually marketable.”

He also admits the artist’s persona makes all the difference in the internet age.

“It’s about the music, star power and the team,” Price says. “If you have the right team and creatives around you, no question you can sustain a long career. In this day and age, if people buy into the person, that’s enough to sustain. Cardi B is a prime example. No one expected her to get a #1, but consistency and people buying into her manifested that. Now look.”

The risk? Viral sensations like the “Cash Me Ousside” girl and Cardi are likely just the latest artists du jour.

Until they fizzle away and get replaced by the next angsty teen or social media queen with a viral hit or video, Bhad Bhabie will be talking trash to strangers (and actor Seth Rogen) the same way she talks to her mom and get plenty of attention for it.

Correct pussy…No one deserves shit you have to go fucking take it?☠️?so stop hating and go do something https://t.co/hzGzem0ekV

“We’re in the internet age,” Price says. “Everything is ran and controlled by the internet. YouTube, Twitter and Instagram are the biggest platforms online. I do believe a lot of true talented musicians are being overlooked due to the internet and internet sensations.”

“For me, you can’t complain though,” he adds. “You gotta adjust with the times. Don’t be discouraged by viral sensations. Let it inspire you. Find your way. Find your light. Shitting and hating on the next person’s light isn’t the way. Followers, likes and the power of the internet is real.”

Bregoli is further proof that anyone — ANYONE — can become famous as long as they have those numbers. As long as music fans are clicking that “like” button or pressing play on their YouTube videos, they’ll be viewed as a potential pay day.