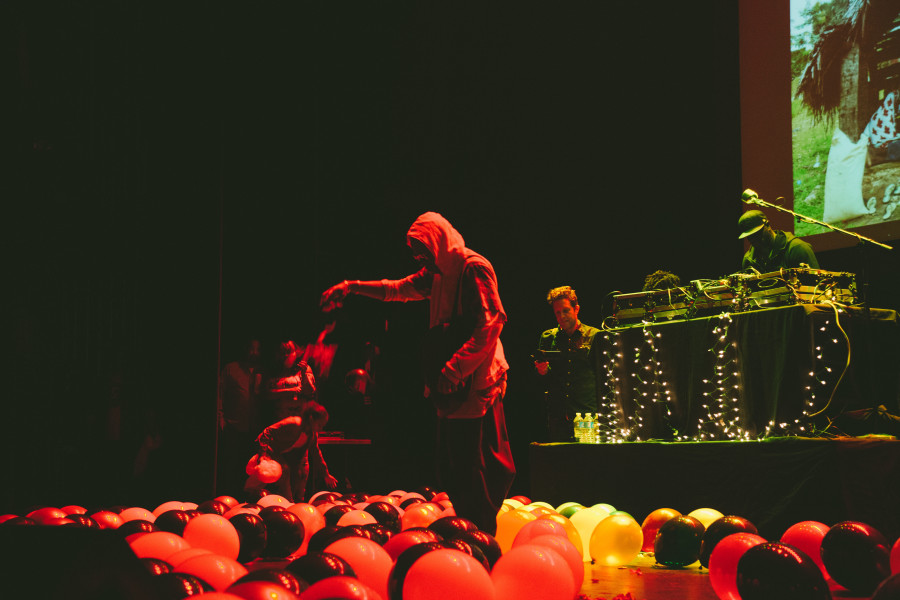 I am not sure what I just witnessed, but I might be the only one okay with it. I was actually super excited for this show: Mos Def a.k.a. Yasiin Bey at The Saban Theatre in Beverly Hills. First of all, 90210? Okay, I see you. This venue is so nice. It definitely lives up to its “theatre” name. My first thought when I walk in: “Yes! It’s seated.” Although everyone stood up for the entire show. The hype to see Yasiin was real. I ran into a ton of my homies tonight, and they were all stoked like I was.

I’m a huge fan of Mos Def, along with old school Hip Hop. This actually inspired me to create a “Hip Hop Saved My Life” playlist on our Spotify account (which you should all follow) right before I left. I brought my homegirl who’s a Hip Hop head like me. We were joking at how the crowd was primarily dudes. Where are all the trill females at?

About to see #MosDef in #LosAngeles but wait… someone can't spell #YasiinBey right ???

This had me crying. How are they going to butcher the headliner’s name? This was on every single ticket, too. Smh. Get it together. The DJ spinning all the classic hits definitely had the everybody turnt. I miss Rock The Bells. A lot.

This was not your average Hip Hop show. . . at all. This was pure entertainment, with a hint of comedy and a spray of Hip Hop. First of all, we were told he would be on at 9pm. He had the crowd waiting until 10:30pm. Right before Yasiin graces the stage, a bunch of balloons were dispersed. It traveled into the crowd the entire night, which was random. Not as random as Yasiin coming out and throwing rose petals onto the floor shortly after. This definitely set the tone for the night.

This was my favorite song of the night. “Auditorium” was my shit. I can’t say he played many other tracks after that. The night consisted of him feeling himself (breaking out the dance moves) on stage intertwined with many short rambles. My people were not amused. I honestly didn’t mind. I can honestly say I have nothing negative to report. This was Yasiin Bey in the flesh. He gave us his personality and state of mind. Let the man live.

But then, I think about all the people that paid to see a good show. . . I’ll fall back. I swear at one point, he was humping the sound system on stage. Some of us thought he was on drugs (I don’t want to admit it). By the way, this was just his second performance in the United States in five years. He had some trouble with his passport and wasn’t allowed back in the states. Yikes.

.@AndersonPaak is in the row in front of me at this mos def show and i'm trying not to freak out lmao

Shout out to Anderson .Paak in the row in front of us with his lady friend. He was having a grand old time, for the 20 minutes he was there. Also sighted: Charles Hamilton, Ferrari Shepherd, and Mahershala Ali from Moonlight. On my way out, I ran into my homie who put it perfectly, “I’m a fan of Mos Def, not Yasiin Bey.” Nailed it.

Daybreaker LA: the early morning dance party of your life.

Good morning. It’s early af and I got no sleep. “Push through” is what I tell myself on mornings like this. My homegirl hit me about this dope early morning dance party called Daybreaker. I had to check it out (#FOMO). It takes place in 15 cities around the world, and today was L.A.’s lucky day. The downside: it started at 5:30 am. The plus side: no one cared.

Yoga was optional, but for those purchasing tickets, you had to pay a little extra. The actual hours of the event were 6:30 am to 8:30 am. I always like to know how much tickets cost, and they were over $20 ($35 with yoga).When I checked the day prior, they were sold out. Win. This event included ugly Christmas sweaters, cold brews, Hint waters, Kombucha, live music, a disco ball, and nothing but good, positive energy. When they say dance party, they truly mean dance party.

Couture on Cahuenga Blvd. in Hollywood.

I pull up to Couture in Hollywood and laugh because I remember the club nights I’ve spent here. L.A. is so much different in the day, especially compared to the nightlife. This drive was brutal. I was so tired that I was nodding off. It was one of those “I should pull over moments” but I couldn’t bail, especially on my girl. I hate when people bail on me, so I make a point to not to do it to others. (unless I’m ill and dying).

A positive quote for the rest of your day.

Honestly, I feel like I walked into a cage of pure, positive energy. I literally started moving to the music without even noticing. Everyone was so friendly and genuinely there to have a good time. It really was the definition of good vibes. Overall, such a powerful message conveyed in a fun, subtle manner: dance. It probably takes the award for the most lit dance party at this hour. At the end, we all Kumbaya-ed and had a moment of gratitude.

Also ran into Trevor Wesley, who ended the party with the most memorable performance. I actually saw him perform at my girl’s Musicology songwriter panel. He’s definitely not one to forget. He’s a singer and has this quirky sense of humor that you can’t help but embrace with a smile. If you ever run into him, just say, “Dat ass tho.” Trust.

Thanks to Nicole for letting me cover the event! We will definitely be at the next one.

Roy Woods’ Unlocked Tour at The Roxy on Sunset.

Tonight was Roy Wood$ at The Roxy on Sunset in West Hollywood. I was pumped. Shout out to my girl Avi with Warner, she always got my back. I just saw Roy when he came out as a surprise guest at the PARTYNEXTDOOR show. Seeing “Drama” live reminded me how much I fucked with him.

I can honestly say I am blown away by his performance tonight. He literally showed out. This testimony on why he belongs in the game. First of all, he’s signed to OVO. Another winner from Canada. Speaking of, my girl Ashley spilled the beans and told me Drake was in the building. We were waiting the entire night, and I have to admit the anticipation made the night a lot more fun. My girl and I are definitely Drake fangirls, but who isn’t?

First of all, The Roxy is a tiny venue and it was completely packed. Fans knew every word. I was so taken aback. . . even the merch sold out. He performed “Jealousy,” “Gwan Big Yourself,” “Got Me” “Why,” “Go,” and “Get You Good.” Actually, just cop Waking At Dawn. There we go. “SKRT Remix” was definitely a highlight. We were turnt.

And then. . . the man of the hour. Drizzy Drake. This made my month. We were so lit.

She got a little bit of drama with her friends… ?????? #RoyWoods #Drake @roywoods @champagnepapi

You know he had to come out during “Drama.” I fucking love when big artists come out in small venues. It makes all the difference. Btw, Roy Wood$ is only 20 years old. His presence had PND vibes for sure. He had the ladies screaming with his dance moves. The future is bright for this kid.

Thursday was Mass Appeal’s Music Video Night featuring the dopest filmmakers in the game: aplusfilmz. This took place at Delicious Pizza in Mid-City. If you live in L.A., you know what Mid City means. They throw this event once a month to showcase talented directors, filmmakers, producers, editors, etc. Tonight’s featured guest was special, and I was told I didn’t want to miss it.

I pull up around 9pm to find a basic pizza parlor. I was worried I had the wrong spot. I walk in and instantly my nostrils are filled with the aroma of delicious pizza (no pun intended). It was dank. We make our way to the back room. That’s where the party was. I casually disturb the peace and make my way to the front to say hi to the homies. The support was definitely real tonight.

They were showing a medley of music videos when I walked in. In my head, I’m like, “This is an amazing mix of videos.” Later, I find out my girl Jess, a.k.a. DJ Hella Kitty, put it together. She’s the trillest. Aside from the selection of videos, the transition was so smooth. We were lit. These were the kind of events I fucking love in L.A. It was a room packed full of people genuinely into the art of music and creating. I recommend everyone to check out their next event. Super good vibes and good people.

Aplusfilmz consists of three guys: two brothers (Edwin and Fredo Tovar) and Scott Fleishman. I met them all and they were all so down to eartch. The setup for the event was super dope. The host, John Brown, would ask a couple questions, and then they would play one of their music videos. You guys, their roster is lit. My absolute favorite was “Wild Boy (Remix) by Machine Gun Kelly. I love that song, and everyone in the video.

“JoHn Muir” by ScHoolboy Q and “HiiiPower” by Kendrick Lamar were also highlights. In the Q video, they literally film the whole thing from the point of view of a camera attached to the side of a car. I also found out that car is owned by my homegirl’s friend, and he’s actually the one driving it in the video. He works with aplusfilmz. “Small world” will forever be my saying.

The stars of the evening: aplusfilmz.

After they played the music videos, they did a Q&A with the audience. I thought that was super dope. Everyone had a lot of positive feedback. I had to ask them how they split their work, and the dynamic of the group. With three people, there are bound to be disagreements from time to time. They squashed that real quick. It seems like whatever system they got going has never failed.

They also disclosed that their goal is to make a movie. These music videos are just adding to that end goal. That’s sick. They are definitely going to get there.