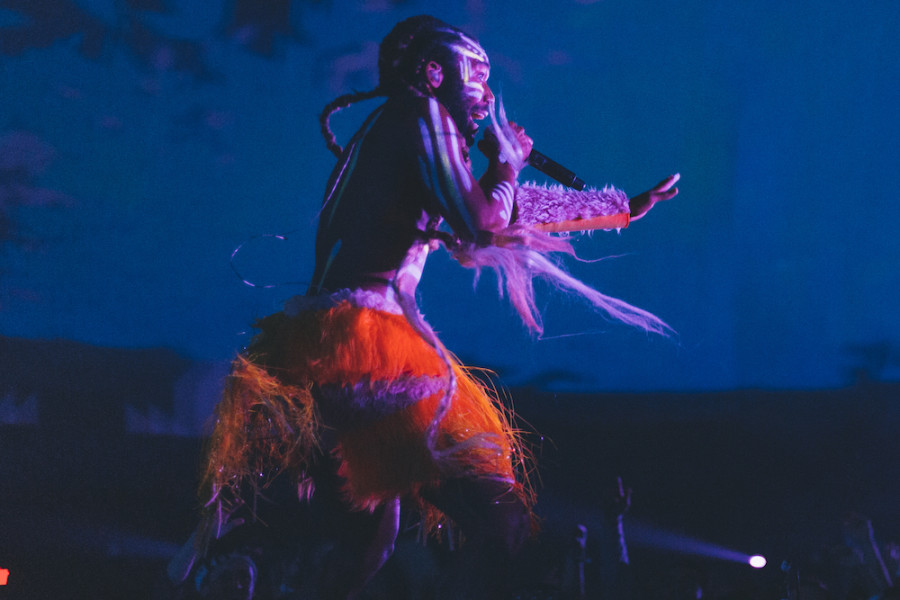 Sometimes I take my first concert experience for granted.

Compared to my peers’ stories, the moment didn’t take place at a large venue and didn’t involve super chart-topping artists at all. Mine took place one late October in 2005 outside at Southern University’s Ace W. Mumford Stadium right before homecoming weekend. All the “cool folks” had a Motorola Razr. For many, it was the once-popular high school cheerleader of mobile technology with a shitty VGA camera rendered useless without decent lighting. The idea of a well-priced consumer smartphone (sorry Windows Mobile & Sidekick fans) wouldn’t become a reality until two years later and social media was primarily a desktop experience. Ringtone dopeness was the only thing that mattered. Considering the night’s performance lineup from Trillville and David Banner to Tango Red, it fit in line with early moments of Hip Hop’s most detested “Ringtone Era.” Regardless of my own opinions of the artists, I enjoyed myself by simply living in the moment.

Childish Gambino delivered that exact feeling while providing the most revolutionary audio/visual experience one will probably see all year. Selling out in six minutes following the late-June announcement via an anti-scalping smartphone app, The Pharos Experience at times equally embraced and dismissed technology. Located in Southern California’s favorite low-tech getaway destination Joshua Tree, Gambino performed five sets of new music the weekend before Labor Day with a new audience arriving each afternoon. Those 21-and-older could camp out and turn up even more until the following morning.

Besides the multi-sensory performance from Sir Donald Glover taking place in a large 150 foot wide/60 foot high dome, attendees could watch three episodes of his upcoming FX series Atlanta at a nearby amphitheater or walk through the trippy “Illumination Forest.”

When it was time to enter the all-white dome and watch Gambino perform “Pharos,” my Samsung Galaxy Edge 7 (I’ve successfully poured champagne on it for those asking) was placed in a gray-and-lime-green pouch with electromagnetic locks from San Francisco-based tech company Yondr. Therefore, any usage of my mobile device was prevented while occupying the performance space. The anxiety of not being able to text, use social media, do anything to capture the moment and even tell time became an unfamiliar reality. Once the weed kicked in, I realized the small daily gadget held so unnaturally close to me at times would have become too much of a distraction. Plus, I was sort of forced to mingle.

@ChildishHecbino PSA: this is the bag that we will be putting our phones in. #Pharos pic.twitter.com/z5eRSm5UMl

And, that’s exactly what The Pharos Experience amounted to. Named after a Greek island featuring one of the historic Seven Wonders of the Ancient World, Gambino and the Wolf + Rothstein’s team created an experience that’s left many wondering just how they pulled it off so mysteriously. With that in mind, here are six takeaways from The Pharos Experience.

Pharos Is A Total Sonic Shift From Because The Internet

Artists testing new material during a performance isn’t anything new. Charging attendees $100 to hear untested music exclusively in the middle of nowhere is an unimaginable risk. Thankfully, Pharos is out of this world. Working with longtime collaborator Ludwig Goransson, Bino was accompanied by a five-piece band featuring Lynette Williams on keys, bass player Thomas Drayton, Chris Hartz on drums, percussionist Dani Markham and guitarist Sam Sugarman. That doesn’t count the six-person choir for backup.

Anyone expecting Because the Internet or even EP Kauai might be in for a disappointment if they don’t keep an open mind. Pharos cleverly fuses elements of funk, jazz, soul, blues, Hip Hop and pop in ways not heard since The Love Below. Gambino lets loose his inner George Clinton, James Brown and Andre 3000 fearlessly. For the nearly 70-minute span, the 12 featureless songs feel like transforming organisms that flow freely to the next. Then there were the scene-stealing solos from Sugarman and Williams. Giving around a verse and a half worth of rapping, Pharos features him taking his new singing vocals in fascinating directions. Though it was fairly difficult to hear song lyrics, it sounded good enough for that not to matter much. Plenty of time will be provided to dissect lyrics when Pharos actually drops. Fans of recent releases from Hiatus Kaiyote, The Internet, Flying Lotus and Thundercat have much to be excited about.

Apparel blending afro-futuristic aspirations and tribal prints should feel right at home for those digging George Clinton’s Parliament Funk early days and Stankonia–era Andre 3K. Appearing on stage shirtless with face paint that would make Fela Kuti proud, what he wore makes Young Thug’s Jeffery cover look tame. Donning a neon-colored tribal skirt and cornrows that went as far as his ankles thanks to blond hair extensions, Gambino would outshine any Na’vi in an Avatar sequel. His backing band followed suit with their own unique outfits. Just like James Cameron’s visual effects classic, Pharos pushed its visuals through impressive advanced technology as well.

Probably the most innovative visual component to a live performance since Coachella’s Tupac hologram, the covering dome’s ceiling was animated with different psychedelic sequences for each song with quasi 3D effect. This was all done through a partnership with Microsoft and artist Mikael Gustafsson, who bring Gambino’s vibrant world to life effortlessly. Skeletons and alien creatures danced individually in a world that stylistically wouldn’t feel too out-of-place in No Man’s Sky during one point.

At times, Pharos feels like a modern version of past Disneyland attraction Captain Eo and animated classic Fantasia the way the music seems to be in sync with what’s visually happening. The finale even featured a flight through space as planets literally feel as if they’re passing by; speeding up and slowing down during the song’s final moments. Sober or intoxicated, the level of immersion felt breathtaking at times.

There Wasn’t An Overt Fan, Media & Celebrity Hierarchy Around The Event

Going to a concert and music festival can get tricky when one doesn’t have too many friends in the press. Journalists have it hard when trying to get access to restricted areas as well. That wasn’t much of an issue for Pharos since everyone had the same access to everything available. Cameras were prohibited, leaving many photographers (including myself) taking pictures of the dome from outside the event grounds. The only difference between the entry bracelets was the time of one’s respective timeslot to see Gambino perform. For the dome’s ability to fit two-and-a-half thousand people, there wasn’t the “too far” feeling that most performances suffer from. Kanye West’s elevated stage for his current Saint Pablo Tour serves as another example as well. Regardless of where one stood in the dome, everyone felt close enough to Gambino and had their own angle to view the animated sequences above. One of the publicists for the event said it was intentional in making things more social.

Someone was going to sneak their mobile device into the dome regardless of the measures taken. Though low-quality videos have already leaked online, they fail to capture exactly how immersive the experience is. Most of them have been Gambino singing and doing his various shimmies. Obviously, his team has been working overtime attempting to get videos pulled. Pharos is truly the sum of all its parts and really can’t be spoiled even with smartphones.

Gambino might have the best album this year if his live act can translate to an MP3 or streaming service on the music front. Will he ever do The Pharos Experience again considering the difficulty in translating the visuals to iTunes? Maybe the rise of 3D headsets can remedy that. Who knows? Pharos doesn’t even have a release date.

Also it helps that attendees thoroughly enjoyed the episodes of “Atlanta” shown. Rumors of the series being an ethnic version of It’s Always Sunny In Philidelphia were laid to rest. African Americans have more options for quality television unseen since the late ’80s/early ’90s and one can place Atlanta within the same pot as upper echelon shows “Power,” “Black-ish,” “Insecure,” “The Get Down” and “Queen Sugar.” The contrast of overtly hilarious and super serious moments were in abundance from what was shown. Some of the themes of one episode range from the unjust treatment of mentally disabled prisoners to the real effects street raps have on children from impoverished areas.