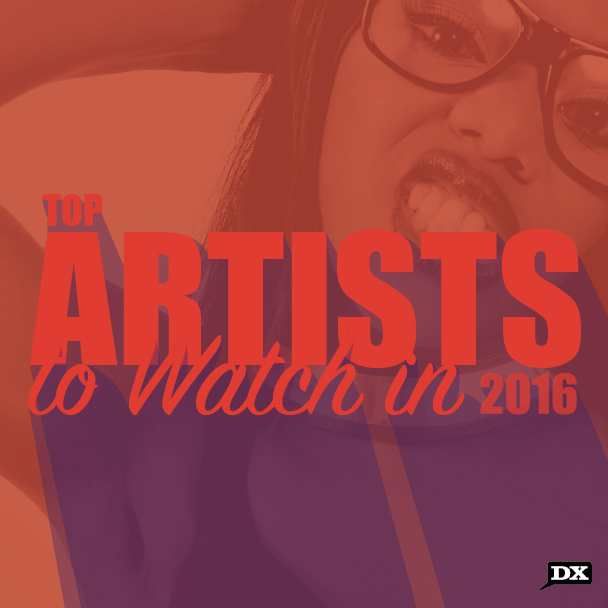 Each year, Hip Hop music and culture finds a way to surprise us. As much as 2015 saw a few albums make, to some, the best rap year of the decade, we also saw pleasant surprises in the form of Pusha T’s December release King Push – Darkest Before Dawn: The Prelude and a slew of great projects from indie stars and up-and-comers dropping sometime this year. Regardless of the region, we looked at a group of artists with intriguing storylines that we felt were worth keeping an eye on in 2016.

Will a new year bring continued success for the Atlanta Rap scene and a steady stream of consistently great albums from Hip Hop’s top-tier? Will Hip Hop’s one percent continue to outpace the rest of the field? Will Hip Hop, somehow, steal Wu-Tang’s Once Upon A Time In Shaolin back from super-villain Martin Shkreli? With a dozen or so similar storylines fighting for attention, here are the emcees we’ll be following closely for 2016.

The UK has been turning out plenty of potential crossover artists within the past few years including Little Smiz and Skepta. However, one rising star utilizing the new digital era of music successfully last year was no other than Lady Leshurr. Making noise in early 2015 with her “Queen’s Speech” series, the one-shot video accompaniment drew millions of views. Was it the funny blend of topical humor that reached both her native and American audiences? Or maybe it was her fairly above solid lyrical abilities. Topping things off were several co-signs and the huge placement in the Samsung Galaxy commercial. – UG

A Drake reference can make you or ruin you. The pressure mounts as your name spreads like wildfire through social media. Earl Sweatshirt, he who doesn’t like shit and doesn’t go outside, becomes afraid for you. Drake’s done this before, he implies. He’s triggered a landslide, eventually taking over a person’s musical lane. Normally you’d be shook-daddy, wondering if things are going to be alright. But, then, you’re not Kodak Black. The Pompano Beach product caught a viral video, caught a charge and then caught a record deal in that order. It’s a rap tale if there ever was one and if Bryson Tiller is trap-soul then Kodak is soul-trap. The dude is boozy, dreary and irreverent, dropping lines like, “I’m healthy, I smoke broccoli” with the verve only someone that young could have. And while he may be, seemingly, a project with a huge upside, all signs to point to go for 2016. – AG

He slurs through verse after verse with stares menacing through guns and bobbing black knots lining his head. Meet Playboi Carti, the slender Atlanta native cool with the Awful Records crew, reportedly signed to A$AP Rocky and owner of one of the most pervasive loosies of the year in “Broke Boi.” Some might dismiss him as just another super-nihilistic, drugged-out rapper—the kind that dominate the ATL market these days—but there’s more to the young Carti. This year, we’ll find out whether or not he can go beyond songs like “Fetti” and “Chill” and make a career out of this thing. – AG

Home to Migos and OG Maco, Quality Control has become one of the de facto labels out of Atlanta. One emcee slowly rising to the crop of the stable is New Orleans-native Young Greatness. Before the summer of 2015 ended, he’d drop the I Tried To Tell Em mixtape which featured the single “Moolah.” Fast forward to now, the single produced by Jazze Pha  has slowly been climbing the charts. A new mixtape is slated for this year which hopes to finally be the break the rapper deserves. Compared to the rest of his label mates, his less turn-up more rapping flavor may push him forward. – UG

Probably the youngest on the list, A-F-R-O could be considered the closest West Coast Hip Hop gets to a very traditional emcee in the style of New York rap. Barely an adult, the Bellflower, California native spits with an articulation and delivery of someone twice his age. Makes sense that R.A. The Rugged Man would embrace him and help mold him into something cherished by the culture. Kicking off 2016, he even had a co-starring role in VH1’s The Breaks. Slated to drop a project, this could become a true breakout year for A-F-R-O. – UG

KR is the complete package. The Los Angeles artist has an incredibly nimble delivery, laudable wordplay, and overflowing personality. Watching visuals for his 2015 releases “Jam” and “Play My Shit,” are nearly as entertaining on Mute as they are blasting through the Bose, for example. The most consistent knock against the I$olyf3-founder is that critics say he sounds too much like Kendrick Lamar or Chance The Rapper or whoever; that he doesn’t yet have his own style. New artists never emerge without mimicking their influences, one. And, two, neither Kendrick nor Chance can dominate a dance floor. Look for a new KR release in January 2016. – JH

Eskeerdo’s self-titled EP stands out as one of the most underappreciated releases of 2015. Loaded with heart-attack inducing production and visceral honesty on the Cuban immigrant experience in America, the Grammy-winning songwriter detailed a life most have never heard on wax. “We were homeless and homesick,” he raps on “Manolo,” which serves as a nod to his grandfather along with Scarface’s famous sidekick. “Put the faith in the yola / So when you cut it with the soda / You fuckin’ with the culture.” Expect Eskeerdo’s Cuban Jesus in January 2016. – JH

Quietly, Dutch Rebelle may be Boston’s most talented emcee. Since releasing Rebelle Diaries in 2014, this Beantown beast has hit stages nationwide, released a slew of visuals, growing more impressive with every set. Whatever she may lack in Youtube views and Soundcloud plays is superseded by her raw talent. Dutch Rebelle can rap. She can deliver in double-time, tell a tale that’ll leave an audience teary-eyed, dissect social complexities. Her following may not match her talent yet, but expect the bandwagon to get crowded in 2016. – JH

What do you get when you splice together a dedicated and grueling grind towards jumpstarting a career in Hip Hop? Generally, a whole lot of MP3s accompanied with a hope and a prayer. Yet, Futuristic saw all his efforts culminate to a full blown mission after he did the unthinkable when his intentional attempt at going viral actually went viral. In early 2015, he channeled his inner Steve Urkel and donned a nerd’s disguise to flash his lyrical aptitude for unsuspecting citizens in Compton. From there, the 22-year-old California transplant by way of Tempe, Arizona did the unthinkable once again: he transformed novelty into accessibility by fanning the flames with good music. He quickly followed up with a more streamlined version of his antics in “The Greatest,” which rose its way to more than 10 million views on YouTube. To cement his year of good fortune, Futuristic reunited with his longtime collaborator Devvon Terrell for the album, Coast to Coast, a twelve-track offering that should ring in even more accolades throughout 2016. Don’t call it a revenge of the nerds. His force has most definitely awakened. – TC

Marauding In Paradise was an uneven kaleidoscope of great ideas that sometimes missed their mark. But, when Jazz Cartier did hit, the result was incendiary. Take “Dead Or Alive,” for instance. The Lantz production stirs and rages like sudden fits gusts of wind. His voice is operatic and, most of all, the guy can really, really rap. Whether the art or the sport moves him we don’t yet know, but Jacuzzi Cartier comes screaming out of Canada at warp speed. And if 2016 sees him grow even just a little, he may join Drake as a Canadian product dominating their  Hip Hop cousins to the south. – AG