MoSS - Marching To The Sound Of My Own Drum 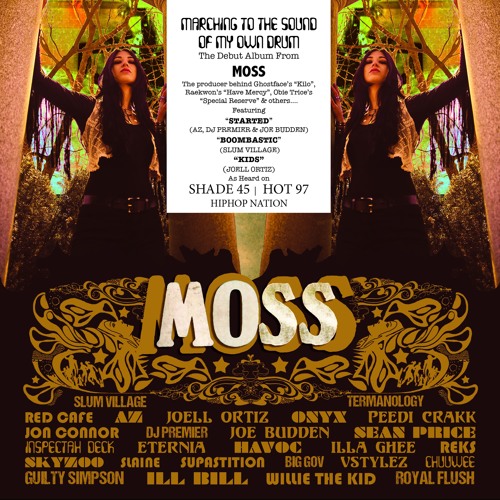 Long before Drake adopted his “6 God” title and his producer/engineer Noah “40” Shebib became Canada’s most favorite sons, Toronto-based producer MoSS was supplying his production heat to the top underground and heavily-rotated MTV rap artists during the TRL era. During the time period where major and independent record labels made an initial attempt for a Hip Hop version of NAFTA during the early-to-mid 2000s, MoSS emerged with first wave of Canadian Hip Hop artists such as Kardinal Offishall, K-Os, Choclair, Saukrates, and Swollen Members were vying for attention stateside. But, they failed to turn the corner and didn’t acquire a space in the American rap lover’s ears. MoSS mushed on and built his reputation as one of the top producers north of the border. He started by working his way down from Toronto along the Great Lakes to help spark the career of Detroit spitter Obie Trice on his earliest hits “Well Known” and “Mr. Trice.”

The T-Dot producer set the tone for Ghostface Killah’s 2006 album Fishscale on its second track “Kilo,” impressive work with Boot Camp Clik, Kool G. Rap, The Game, Papoose, Slum Village, M.O.P., and Raekwon to name a few. He also signed to DJ Premier’s Works Of Mart production label. Helps that MoSS’s production credits have totaled the span of two million albums sold. So, it seems only right for MoSS to step out and make his own mark as one of Hip Hop’s top beatsmiths like fellow producers Diamond D, DJ Quik, Statik Selektah, Dr. Dre, and his hero J. Dilla in the form of his debut LP Marching To The Sound Of My Own Drum.

The fifteen-track album begins with an intro that has a militaristic drum beat that sounds like a call-to-arms for all his mic-ripping cohorts from America’s Northeast, South, Midwest, and West Coast blocks. New York-bred emcees Inspectah Deck and Ill Bill step up to the plate and spit some fire with a hard guitar lick sample that makes you grit your teeth and nod your head. On the second track “Started,” the beat sounds like a reach for being unorthodox. That’s a good attempt to give the listener something unexpected, but the track fails because the cymbals make the song sound too busy with the drums and choir singing in the background. It fails to match the delivery of AZ along with a pointless speech from DJ Premier to introduce Joe Budden. The third track, and arguably the album’s best, “More” shows off the skills from Sacramento upstart Chuuwee with his straightforward delivery to MoSS’s boom-bap snares and brass samples. The flute in the song sound offers a great melody and crescendo to make the song ascend on its way out from there.

Then on the interlude “Loner,” MoSS attempts to show off his psychedelic rock inspiration with something from the deep catalog of his reissue label Strawberry Rain. It’s a segue that seems like a random song that pops up in one’s iTunes shuffle mode if  hardcore Hip Hop and AOR seventies radio rock songs control the playlist. MoSS picks up the pace again with more heat as Boston underground stalwart REKS bring his gruff b-boy lyrical prowess on “Lost In This World,” and femme fatale Eternia on “Day & Night.” Although there are plenty more notable artists to await their verbal punches on the record, the album begins to shift off with the Onyx and Havoc collaboration on “Nobody Move.” Plus, with the forgettable tracks by Slaine and Termanology on the banal cut “Jealousy & Envy,” the snooze-worthy “Arm & Hammer Man,” and Slum Village’s “Boombastic,” the album begins to somewhat descend production-wise from there until the end.

“Sex” is confusing interlude to whether it’s an intentional joke or to be taken seriously as a sensually driven ode to soul music and personal vices. The album does find salvation in the posse cut “B.Q.P.” featuring the late Sean Price, Royal Flush, Illa Ghee, and the return of Philly-based former State Property emcee Peedi Crakk, and on the Joell Ortiz heartfelt track “Kids.” MoSS then brings in North Carolina wordsmith Supastition to set off the song “Hard Hitters” with Skyzoo. To bring the album full circle, MoSS goes back to his Detroiter collaboration roots by getting Jon Connor, Willie The Kid, Vstyles, Big Gov, and Guilty Simpson for some shine on “Emotional Redux.” It has great intentions for homage to the artists where MoSS launched much of his career, but it ends not necessarily at a high point.

MoSS does bode well on this LP for the fact that he’s not trying to step out of his producer shoes to get into the booth to rap. He leaves the rapper/producer title alone to optimize his collaborators rhyme showcases. But, with a lack of linear direction, and some psychedelic beat elements that tend to get in their own way with the songs, the album loses steam for emcees as the drummer couldn’t give them some. It fizzles at the halfway mark and beyond, giving a new meaning to Canada Dry.