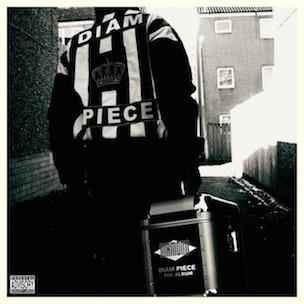 Diamond D is a name that requires no introduction for many, yet at the same time the catalogue of his music as both rapper/producer may necessitate an entire history lesson for others. Much like D’s collaborators—from members of the Diggin’ in the Crates Crew to OC and Ras Kass—he has attained the position that some may refer to as “most underrated.” It may all go back to his essence, Stunts, Blunts and Hip Hop, when he introduced himself as the “Best-Kept Secret.” Despite never crossing over into mainstream Top 40 territory and a seven-year hiatus, word of his new album The Diam Piece showed much promise since it was D’s return to total control as a producer. While the 18-song compilation is not without flaws, it returns Diamond D to a position of importance as we witness the preservation of his own crisp sound.

While the project is presented as a compilation, it very much retains the tenets of an album. Songs such as the mellow yet lyrically sharp “Where’s the Love,” show Elzhi discussing the less glamorous side of the Rap life, “Thinking I should’ve listened when they suggested I learn a trade…Instead of dealing with promoters that are janky / Coming off a flight, try to be polite but I’m cranky / ‘Cause they didn’t pick me up, hotel far from swanky.” Between Pharcyde on the hazy “Hard Days,” which is about the everyday grind, and “Pain” featuring the stand-out combination of Chino XL and A.G., a real theme of blue collar musicianship is conveyed and what emerges is a portrait of Diamond, himself. Now in his forties, it seems that life has expanded beyond stunts and blunts, including moments of faith, fractured ego and self-doubt.

D’s production on the album is centered upon varied, melodic samples and the priority of the drum beat, as exemplified by songs like “We Are The People Of The World” and “Take Em Off Da Map,” that carry the spirit of school lunchroom cyphers. However, with the current heavy sounding styles inspired either by Trap or EDM, Diamond’s production—regardless of how focused it may be— lacks a certain dynamism. Instead, he favors a head-bopping groove that lulls the albums pace into a too comfortable third gear.

The Bronx producer/emcee makes nuanced choices here, as well. He enlists fellow producer/emcees like Pete Rock, Hi-Tek and Scram Jones, and they keep a certain consistency of sound that underwrites the project. D also places most guests in positions to flourish. Pharaohe Monch shines on the creatively raunchy “Rap Life,” offering, “I win unanimously, letting rounds off / In your face, because my mic is a magnum / See me and this chick, we go back like Cro-magnon / Man, we did it in the back of your Magnum / I said put them Lifestyles back, give me the Magnums.” And, take “We Are the People…,” Kurupt and Tha Alkaholiks would make for a successful collaboration in anyone’s imagination, yet few would imagine that Kurupt’s gang banging aggressiveness and Tash and J-Ro’s party antics would be used to make an idealistic peace anthem.

Diam Piece holds together for the same reason that its creator has done throughout the years, which can be found in the guiding principle of remaining true to one’s self. On “Jose Feliciano,” the beginning snippet say’s “I’m what the people want. I’ll never sound like nobody else. I ain’t going to do that to myself. I’ll sound like myself. Even if you don’t like it, it’ll be my fault…”

At 18 songs, D does have some diamonds in the rough. “187” featuring Guilty Simpson and Ras Kass offers grit, while “It’s Magic” features a high-handed verse from Evidence, and “Pump Ya Brakes” is a moment in the compilation, featuring three ample emcees of the female gender—Rapsody, Boog Brown, and Stacey Epps.

While it is clear that Diam Piece is not without it’s flaws, it is a successful return nonetheless and hopefully a foreshadowing of more to come.