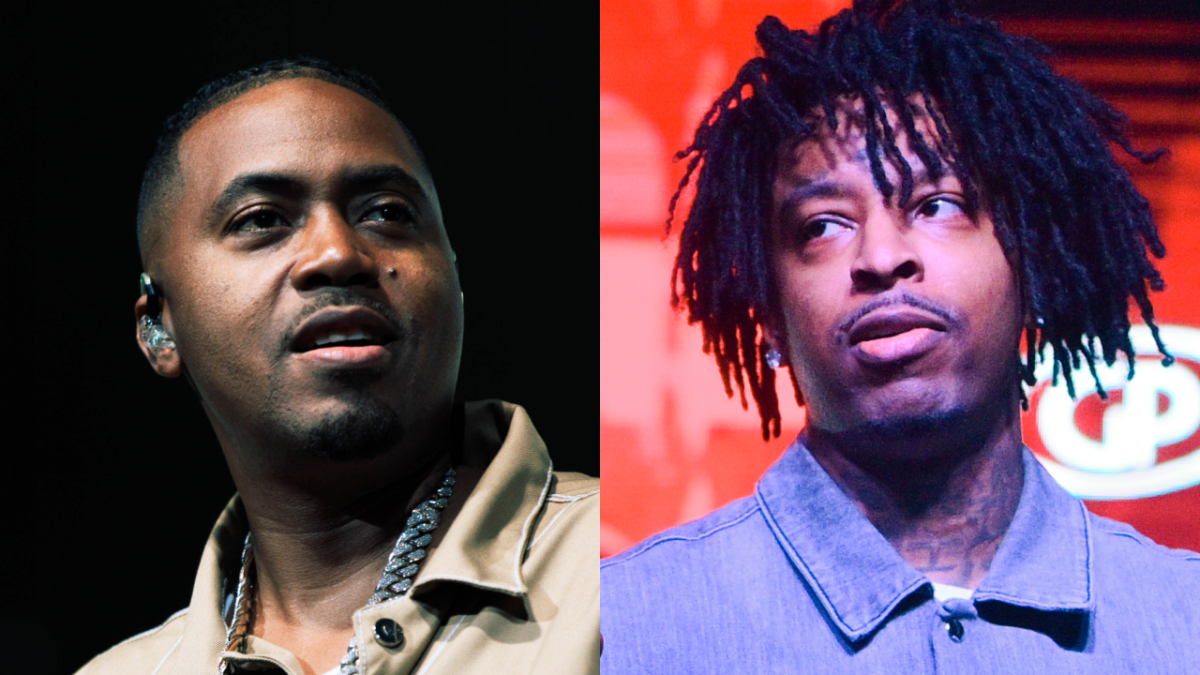 Nas and 21 Savage have joined forces on a new song following the Slaughter Gang rapper’s controversial comments about Nas’ relevancy.

Released late Tuesday (November 29), “One Mic, One Gun,” finds the two Grammy-winning MCs putting on a public display of unity while bridging a wider generational gap within Hip Hop.

From Queensbridge to Atlanta, Nas and 21 run a two-man weave over bouncy, triumphant production from Hit-Boy, trading complementary verses throughout the almost three minute-long track.

A repentant 21 Savage kicks things off by walking back his previous remarks about Nas, declaring: “When you turn a legend, no such thing as relevance.”

The Her Loss hitmaker goes on to refer to him and Nas as “the Capo” and “the Don,” while stating his intentions to follow in Esco’s footsteps, both as an artist and businessman.

“My net worth like eight-figures, I’m working on getting me nine,” he raps, before adding: “I ain’t going against no legend, n-gga, I’m trying to be next in line.”

Nas, meanwhile, reminds listeners about his status as a G.O.A.T. in the rap game while touting some of his recent accomplishments, referencing his N.Y. State of Mind Tour with Wu-Tang Clan and King’s Disease trilogy with Hit-Boy.

The 49-year-old also thumbs his nose at the culprits who burglarized his Los Angeles home earlier this month: “They just ran in one of my cribs and took what? I replaced it (Haha) / Two Caucasians up out of their faces / Most of y’all assumed that they was black, it’s exploitation / They ain’t know that I see everything, invested in Ring.”

Elsewhere, he urges 21 Savage and Kodak Black, who have sparred in recent weeks over 21’s comments about Nas’ relevancy and a potential Verzuz battle, to mend fences before closing out the track by saying: “Two kings… We’re sending love to the whole culture… 21, Esco… Mass Appeal, Slaughter Gang… This shit too easy, king.”

“One Mic, One Gun” was announced just hours before its release, with Nas sharing the cover art on Instagram along with the following message: “Only way we moving is with love, respect and unity. The foundational principles of hip hop. Excited to collaborate with my young brother and I hope more artist use turbulent moments and turn them into a time to make new art. That’s what it’s about.”

The song comes after 21 Savage questioned Nas’ relevancy in the current rap landscape during a Clubhouse call shortly after the release of the Queensbridge MC’s latest album King’s Disease 3.

“I don’t feel like he’s relevant,” he said amid a discussion about veteran rappers. “He’s not. He just has a loyal-ass fanbase and he still makes good-ass music. But relevant? Nah.”

21 later clarified his comments on Twitter, writing: “I would never disrespect nas or any legend who paved the way for me y’all be tryna take stuff and run with it.”

However, that didn’t stop the flood of negative reactions, with the likes of Hit-Boy, Kodak Black, Fivio Foreign and Michael Rapaport criticizing his statement.

Even Nas himself appeared to respond to the controversy by posting a photo of himself on Instagram along with a caption that read: “LOVE,” accompanied by a crying face emoji.

Following the release of “One Mic, One Gun,” Hit-Boy shared a video on Instagram capturing Nas’ initial reaction to hearing the beat in the studio. In the clip, an amped-up Nas yells out “hold up!” before saying into the camera: “I think we’re gonna kidnap the rap game for a little while.”

“Nas called me a few days after KD3 dropped and said ‘cook a joint for me and 21,'” Hit explained in the caption. “this was his reaction first time hearing the beat.”