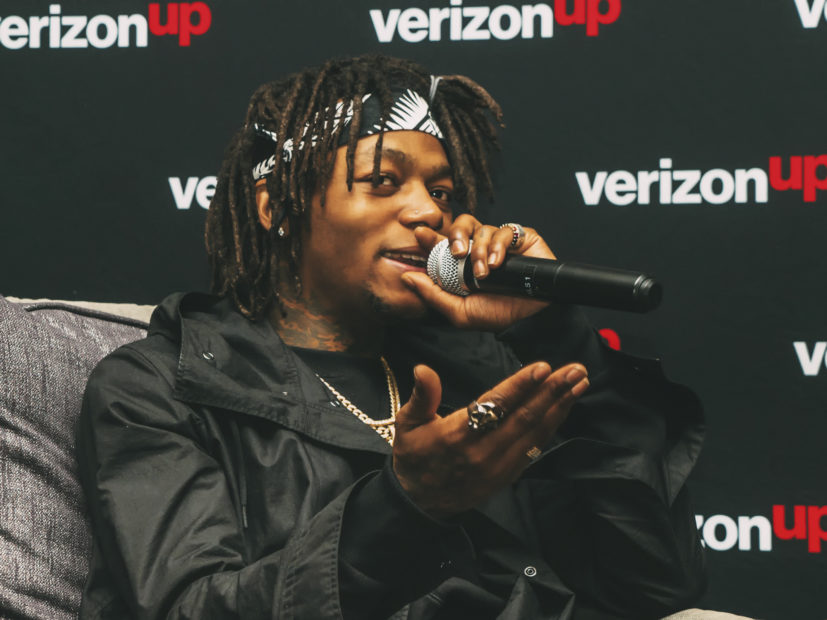 The Story How Leonardo DiCaprio Invited Dreamville’s J.I.D To His Birthday Party After Hearing About "DiCaprio 2"

Dreamville-signed East Atlanta rap star J.I.D is getting ready to drop DiCaprio 2. It’s the second installment to his 2015 mixtape DiCaprio, which is scheduled for release on November 26 and expected to feature production from J. Cole and the late Mac Miller.

During a one-of-a-kind fan experience helmed by Verizon for their reward program dedicated to its most loyal customers called Verizon Up, the “Never” artist spoke with HipHopDX about the forthcoming project he ambitiously named after the one and only Leonardo DiCaprio — and it’s certainly with purpose. Upon closer inspection, music fans will see that there’s more in common between Leo and the Spillage Village cohort than may be realized.

In 2015, when J.I.D first unleashed DiCaprio, the title was appropriate because he felt just like the Wolf of Wall Street actor. Producing great bodies of work, but slightly overlooked by their respective creative communities. J.I.D has always been super confident in his talent and like Leo, he could relate to not getting the appropriate recognition for putting out quality work. It’s 2018 now, and Leo has his Oscar (finally) and J.I.D is signed to Grammy Award-winning artist J. Cole’s Dreamville label.

Not only that, he discloses that the Leo himself is actually excited for DiCaprio 2’s release, too. So much so, the Academy Award-winning actor even invited him out to his birthday party.

DiCaprio 2 – November 26 – My birthday gift to y’all for being patient ?

HipHopDX: DiCaprio 2 is coming out and you’re signed to Interscope Records and J. Cole’s Dreamville now. You got the Oscar, right? What’s next?

J.I.D: Getting a Grammy. Just doing something impactful for my city and my family. I just want to keep elevating and if it ever comes to a stop I will just figure it out. Right now, I’m just trying to reach each stepping stone.

DX: I know Leo is a really big fan of rap. Do you think he’s heard your music before?

J.I.D: He hasn’t heard it but he said he’s going to listen to it.

J.I.D: I was at Q-Tip’s house and I linked with him because we sampled him on the first project. He fucks with my music and says we have the same vocal inflections and all that shit. We get along and shit. Q-Tip and Leo are like best friends and we was just sitting there [at his house] listening to DiCaprio 2 and he holds his phone in the air and he starts recording a video and was like, “Yo, I’m sitting here with J.I.D, he’s a really big fan of your movies.” Then he put the camera on me and I was like, “I’m a big fan.” Bro texts right back like, “Oh my God, I’ma check it out” and then he asks if I was coming to his party or something like that because it was his birthday. This was a few days ago.

DX: Have you met him yet?

DX: Was that kind of unexpected?

J.I.D: Nah, not really because him and Q-Tip are really close ass friends and he’s playing him a project called DiCaprio so it’s like if your homegirl name is Tiffany and somebody had a project named after her…it was meant to happen.

DX: What was the process of making DiCaprio 2? What makes it different from the first one?

J.I.D: It’s just way better songs and way more stress with this one. I was on the road when I started making this one. It’s going to be fire. It came out super fye. It’s something like a diamond in the rough, whatever that expression is. Pressure makes diamonds.

DX: Mac Miller worked on “Skrawberries,” right? Can you tell me the story about how that collaboration happened?

J.I.D: I don’t like talking about Mac because it makes me sad. It wasn’t even a set collaboration he just came in when I had a session like a homeboy and was like, “I like this, I’ma add this and arrange this.” We was just bouncing around different songs, he was just being a good friend.

DX: He’s really musical, I hear he’s like a one-man show. He does everything. Let’s go back to 2014, what was going on in your life back then when you created that song “Mourning Star” with 6LACK and India Shawn?

J.I.D: We was just putting our hours in. We was all living in the same house. Not India Shawn. But, 6LACK, me and EarthGang. We all lived in the same house and we was working on music daily, just putting our hours in and working odd jobs. I was working at Dominos, somebody was working at Chipotle, someone was cleaning houses, working disgusting jobs and sleeping on the couch. Doing whatever to make money to pay rent and whatever that’ll keep the lights on so we can record. It wasn’t even about having lights, it was about the equipment.

J.I.D: Being crazy and being stubborn about my artist shit. I knew what the sound was and I know what the sound is right now, I just don’t give a fuck. I don’t really care what everyone else is doing because that’s just not me. That’s not my personality. Not like, “Oooh, everybody wearing blue today? Bet. I’ma throw on blue.” I don’t give a fuck. I always wear all black. That’s just me. I’m just not no conformer or wave rider. I just do my own thing.

DX: East Atlanta is growing in popularity. I hear Future, Yung Nudy and 6LACK repping that part of Atlanta. I’m not from Atlanta so tell me, what’s the difference between growing up in East Atlanta compared to the rest of Atlanta and how does it influence your music?

DX: I just feel like there’s so much talent coming out of East Atlanta at this moment. I don’t know who all is from East Atlanta but the first person I heard talking about Zone 6 was Gucci Mane.

“DiCaprio 2” is scheduled for release November 26, stream “Off Deez” featuring J. Cole from the project here.