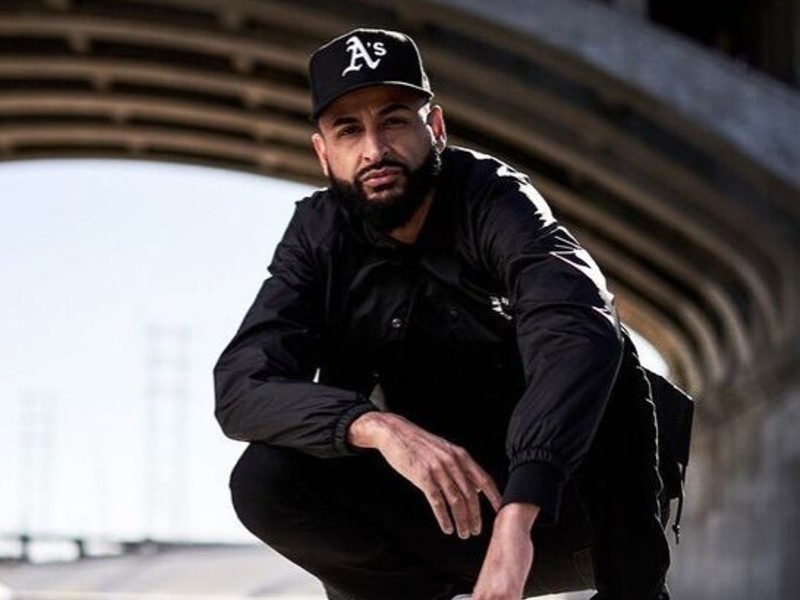 Locksmith has been a lyrical phenom for years, putting on rhyming exhibitions whenever the opportunity arises. His incredible lyricism may have finally met its true match though, in the form of acclaimed producer Apollo Brown.

On Friday (June 15), the two will release a collaborative EP titled No Question via Mello Music Group. For Lock, it’s the first time he’s been able to focus solely on his duties as a rapper since his time working with the legendary Ski Beatz. After handling production on all three of his studio albums and a handful of mixtapes, Lock was finally able to step away from the production side thanks to Brown.

Ahead of No Question‘s release, HipHopDX caught up with Lock during a tour stop in Baton Rouge, Louisiana. The Bay Area native spoke about the origins of the EP, its creation, his thoughts on Kanye West and the therapeutic nature of detailing the sexual abuse he suffered as a child on 2014’s “Hardest Song Ever.”

HipHopDX: Let’s talk about this new project. How did you link up with Apollo Brown?

Locksmith: Obviously, I already knew about Apollo Brown. You know he’s an incredible Hip Hop producer, just classic soulful type of tracks, man. I didn’t know him personally though. I told him I thought he was from New York. So, what happened was about two years ago, Mello Music reached out to me and was like, “Hey man, you know we were talking Apollo. We want to do a project with you. Would you be open to getting production or something like that?” And I was like, “Yeah, absolutely!”

But I think it was just the timing ‘cause I was ready to put out a project and he was working on something else. So, it’s one of those things where you just keep it moving. And then about a year later or about six months ago, I hit him up. Maybe not even that. I hit him up since I wanted to get some production, just get a beat from him.

I DM’d him like, “Yo, brother, I would love to get some production from you.” And he was like, “Yo man! You know I wanted to work with you before, let’s work. Let’s do like a whole project together. Let’s do like an EP.” And I was like, “Yeah man! Why not?” So, we worked out everything — the details. They flew me out to Detroit. We recorded the whole project in, I don’t know, three days. I flew out there on a Monday, came back to California on a Friday. I felt all of the beats immediately and just went in the booth and knocked it out, man. It came together nicely.

DX: With that short timeframe, did you have some concepts in mind already that you wanted to do?

Locksmith: No, I had absolutely no concept in mind, honestly. He played me the beats, and he had a vision of these different beats. I just let the music dictate the lyrics and flow. So, there’s eight tracks total. We recorded seven songs, and the last day I was like, “Yo, let’s get in, do one more.” And I was like, “I want something a little bit more up-tempo.” Just something a little bit more. Again, most of the tracks I just loved it, I loved every last one of them. But the very last one I was like, “Yo, you got something like this?” and he was like, “I got it.”

DX: Are there any unique things that we haven’t heard from you before or concepts that we can expect on it?

I feel like the last time I felt like this was when I was working with Ski Beatz, and I just went out there and we basically did the same thing. We just vibe and click, and the same thing kind of happened with this. I just followed the lead of the production, man. All the beats were knocking. All the beats just had that soulfulness to it, so it’s just very natural.

DX: Did working with Apollo take some of the pressure off yourself since you’ve been doing a lot of production on your albums recently?

Locksmith: Absolutely. It was fucking awesome. It was like I get to sit up here and just rap and just really concentrate on the flows. I got to focus on how I wanted to express myself, just from a lyrical standpoint. So yeah, it was really refreshing man.

DX: You’re someone who’s never been afraid to be political on the mic, and you’ve taken Kanye to task in the past. What was your reaction to all drama surrounding his Trump support and slavery comments?

Locksmith: You know what? I’m not gonna go as hard on Kanye as some people. I understand what he was trying to say. It doesn’t give him a pass, though. But I was just talking about it with someone on this trip that I think Kanye’s statements are a reflection of where he’s at, the same place where he’s at with his music. Like, let’s talk about his first three albums. They were classic albums, very thought-out, precise, incredible, lyrical and musically incredible. We all agree on that, the Hip Hop community as a whole. Then, they start getting weird.

The Life of Pablo was just very unfinished, but there was some gold in there too. I kind of feel like that’s what happens with his rants too. There are some concepts in there that make sense and I can decipher it, but the way he’s presenting it is incoherent and irresponsible in the way he’s saying things.

DX: It seems like one thing in Hip Hop right now that people are kind of struggling with is reconciling the artist with the art and seeing their heroes let them down. What are your thoughts on being a role model versus just an artist?

Sometimes, it is pressure. Sometimes it is. You have fear, and that’s why when I listen to some things that Kanye is saying, I’m like, ‘Oh, OK. I can hear what you’re saying.’ But I think I saw something where he mentioned something about drugs and so when you start putting these kinds of things … I don’t know, I’m not in his shoes. I haven’t received that much fame to understand what that kind of pressure is like.

I say in one of my songs there was a point in time where my mother prayed that I wouldn’t make it big. Now, I understand what she meant by that because back then when I was younger, I think she felt like if I was to make it big, then I probably couldn’t handle what comes with that.

So, maybe sometimes you need time to be able to mature and have enough wisdom to deal with those things. I know for me, I just try to be the best person I can be, regardless if I did this music shit or not. And then that reflects in the music.

DX: To wrap things up, I wanted to ask you about “Hardest Song Ever.” To me, that was one of the most powerful songs I’ve ever heard.

Locksmith: Thank you, thank you.

DX: Can you tell me just about taking that leap of faith and putting that out into the world, and what went into making that song?

First, I spoke with people that were close to me and told them and confronted them about that, you know about the abuse that happened when I was a child. And then when I did that, it just naturally came out as an artist. I didn’t even know I was gonna put it out. I played it for people that were close to me. They were like, ‘This is amazing! You have to put this out!’ And then that’s just how it came about. It’s therapeutic. It was just therapy for me, you know? So yeah, that’s what it was.

DX: That’s great to hear. Anything about the Apollo Brown project that you wanna make sure gets out there before we wrap this up?

Just that it’s coming June 15. It’s an incredible project. If you love lyricism, if you love soul, if you love substance. It’s grown-up music. I feel like it’s definitely needed. I’m excited about it, man. I can’t wait to — it’s one of those times that I feel good.