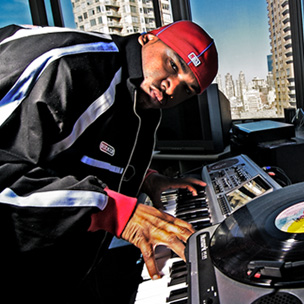 It’d be easy for Ski Beatz to stay settled on his seat in Hip Hop history with classic records like Jay-Z’s “Dead Presidents 2,” Camp Lo’s “Luchini” and Fat Joe’s “John Blaze” under his belt. Instead, the North Carolina-bred and New York City-residing producer maintains a workload reminiscent of a hungry up-and-comer.

Spending much of his time in the “24 Hour Karate School” studio (a.k.a. DD172) with friend and colleague Dame Dash, his upcoming mixtape of the same title features established names like Mos Def and Jim Jones alongside future stars like Curren$y, Stalley and Jay Electronica. And as soon as those samples are cleared, he’s getting to work on several other projects with Karate School’s collaborators. In an interview with HipHopDX Producer’s Corner, Ski talks about the importance of creative minds both new and old, and explains how to achieve corporate success without the limits of corporate terms.

HipHopDX: What all have you been working on, aside from 24 Hour Karate School?
Ski Beatz: 24 Hour [Karate School] just finished getting mastered. Curren$y’s Pilot Talk album, I did all the tracks except for two. I’m working on 24 Hour Karate School Part 2, but that’s been in the making since Part 1. I’m doing a project with Jean Grae, a project with Joell Ortiz, a project with Stalley, a joint with [Rugz D. Bewler]. Pretty much everyone that’s on 24 Hour Karate School, that’s an introduction to their album. Stalley’s got his joint, Rush has got his joint, Jean’s on a joint, Ras Kass, Tabi Bonney, all these artists, I’m pretty much doing projects with each and every one. … Yeah, entire albums. Don’t ask me how I’m going to do it, but I’m going to do it. [Laughs] I don’t know how we’re going to pull it off, but I’ma try.

DX: How did you come up with the idea for 24 Hour Karate School?
Ski Beatz: Curren$y, me, Mos Def and Dame [Dash] were sitting at the table, working in the dojo, that’s all we do 24 hours non-stop. Curren$y was like, “Yo, it’s like a 24-hour karate school in here. We don’t ever sleep, we just work every day.” That was a joke and we started laughing, but Mos Def was like, “That’s kind of dope.” He made a song out of it, and I decided that I was going to make it a mixtape but brand the whole dojo and 24-hour thing.

We got all these artists to come through…how the dojo works is that I might be in there making a beat, Curren$y might stick his head in and start writing. The same day, the video cats may decide to shoot the video for the song that day, before it’s even done. Then we mix it, and they’ll throw it up online. That’s our whole system; we try to do shit that day. … That’s one of the perks of having everything in-house.

DX: Yeah, that was one of my next questions. I’ll look at the tracklist and see everybody involved, and it hits me that all of these people—you, Dame Dash, and all these artists—are in the same studio. What is it like being around that much talent at once?
Ski Beatz: It’s just a creative atmosphere. You’ve got rappers, singers, producers, musicians, artists that paint, video people, graphic designers—anything that’s creative is under that roof, and everyone’s in the same space. And everbody’s got that one goal: we’re going to make Creative Control, we’re going to make 24 Hour Karate School, we’re going to make [the studio space] DD172, Ski Beatz, we’re going to make all of this the new shit. And for all of it to be under one roof? I can’t even explain, you just have to be here. It’s amazing. We throw the coolest parties, we have mad music every day all day. I just left a session with these ill musicians playing this ill ass live horn riff on a Mos Def song for 24 Hour Karate School. They came in and laid that shit out, and it was dope. It was magic. It’s hard to explain; it’s just one of those things you’ve got to be there. You’ve got to come to the dojo, son.

DX: What is it like working with Mos Def? He seems to tackle music in a completely organic way, and to not force anything.
Ski Beatz: Working with Mos? [Pauses] It’s super easy. It’s like working with Camp Lo, it’s like working with [Jay-Z]. I just threw the beat on, and he just got into Mos Def-mode and just went at it. It was dope to see him, because you don’t know what he’s going to do. So to see him grab a pen and pad, and just start doing what he does before it comes out how it is, is crazy. He’s also a great individual to be in the studio with, because his vibe is always up. He’s very inspirational, and an intelligent dude, so it’s great to work with people like that.

DX: With this whole process, who has been the most surprising studio session?
Ski Beatz: Probably Curren$y. I had no idea who Curren$y was, I was totally out of the loop. I met Curren$y at Dame’s crib a year ago, and I knew nothing about who this kid was. I just saw some dude at Dame’s crib. He’s like, “Yo, this is Curren$y, he’s a dope rapper and he’s got a buzz.” I’m like, “Whatever.” I heard him rhyme and I thought, “He sounds cool.” But when I started working with him, and saw his little zone and his flow, he’s definitely ill and has his own thing. He’s out there, and I didn’t really know he was out there.

I think that made it that much better when I was working with him; I wasn’t jaded in any way about anything, he was just some guy I was making beats for. And it worked out good. … If I would’ve known about him, I would’ve tried to give him a totally different style of beat. But I had no reference point: it was just, “Okay, here go some beats, bruh. Rap.” Which was dope, because all the music we did is turning out good.

DX: You worked with Jay-Z on his first album. What is it like working with someone like him when he’s first coming out, compared to someone like a Stalley or Curren$y when they’re coming up?
Ski Beatz: It’s no different. It’s just an individual in the studio who wants to make records. it’s the same job. The stories are different, and Jay-Z is Jay-Z…but Stalley is Stalley. There’s something about Stalley, when someone puts their finger on it and wrap our brains around it, Stalley is going to be a beast. [Rugz D. Bewler] is going to be a beast. Everybody that we work with has the potential to have a career in the game, so to me, there’s really no difference. Personalities are different, so Stalley definitely has a different personalilty than Jay and Rugz. But the whole approach, concept, and studio shit is the same thing, bro.
If you were in the sessions for Reasonable Doubt, you wouldn’t have known it was going to be dope. You might’ve been like, “Oh this shit is hot,” but you wouldn’t have said it was going to be a timeless classic. So maybe the shit I’m working on with Curren$y and Stalley could be a timeless record. You never know; there’s no way to determine.

DX: Really? After working on “Dead Presidents 2” or “Luchini,” you can’t tell?
Ski Beatz: I can’t tell. I know what I like. But many times I say that something is dope and that it’s going to blow, nobody’s checking for it. So I don’t know. I guess us putting stuff on the ‘Net that gets good feedback is a sign that people are appreciating it. So let’s see how they go.

DX: “Dead Presidents 2” is one of my top five songs ever created, so I’ve got to ask about that. How was that beat created?
Ski Beatz: I was at this Hip Hop conference in Miami. [Nas‘] Illmatic had dropped, and everybody was riding around with the tape in their car. They were playing “The World Is Yours,” and I was so in love with the song. I was thinking, “He killed this shit, the pianos were ill, Nas was spitting.” That song inspired me to make ‘Dead Presidents.’ So I went home and tried to find a sample that wasn’t that sample, but that made me feel like that. I caught the Lonnie Liston [Smith] joint, I threw the Nas shit over it, and after that, that shit was that. Wasn’t that complicated at all; it’s all vibes, B. It’s no magic, genie in a hat shit; it’s all vibes.

DX: You’ve also done a lot of work with Camp Lo. What makes them so fun to work with?
Ski Beatz: That’s my family, I’ve been knowing them since I moved to New York and they’re my favorite cats to work with. … Their creativity, their imagery and their whole style—when I met them, they were like that. They’re not faking. They talk like that. They’re definitely my favorite guys to work with, because they always surprise me. I never know what to expect with them. We’re friends, we hang out together, and we have a good time.

DX: Original Flavor was the first group that Dame Dash managed, right? What is it like to come into the game together, and to reunite years later?
Ski Beatz: It’s the same thing, same vibe. Ain’t nothin’ changed. It’s like a woke up, and a day passed. It’s the same exact thing, which is dope. Hold on. [Stops talking for a few minutes] A song we did just got placed on MTV, just now.

DX: Word, congratulations. That raises a question though: in you and Dame Dash’s interviews, you talk about how bad “Wackworld” is, and how major labels and corporations are. How do you balance doing your own thing while still working with Wackworld?
Ski Beatz: The whole key is to not go after “Wackworld,” but let Wackworld come to you. That way, you’ve got creative control. If you go to Wackworld, that means you have no control, because you’re asking them for a favor. We don’t have to ask them for a favor; we did everything, and they’re coming to us. It’s definitely control. We don’t bend to rules, and we don’t do anything that Wackworld would want us to do. We did it our way, and now they’re coming to us saying that they want to play our shit.