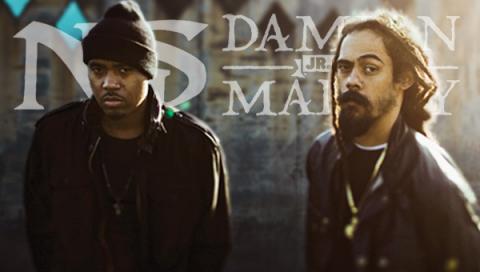 Almost 19 years later, Nasty Nas still is a rebel to America. However since crossing paths with Bob Marley’s youngest son, Damian, the Hip Hop legend may be thinking much more globally.

Together as Distant Relatives, the Jamrock toaster and the Queensbridge golden child are spreading the Gospel that Dancehall and Hip Hop, like Afro-Carribeans and African Americans, are arguably of the same blood. To commemorate their March album on Universal Republic, the duo was in Washington DC Saturday night, joined by some pillars of Dancehall and Hip Hop to explain these beliefs and close musical similarities on a National Geographic stage.

HipHopDX was proudly in attendance for the VTech-sponsored event. Just moments before taking the stage before a packed house of musical and cultural enthusiasts, I caught Nas and Jr. Gong in a bustling back office to the museum. Marley remained soft-spoken and focused, while a more relaxed Nas carried on with passers-by and chuckled as his interludes have often portrayed him. As two bold and substantial voices of oppressed people, both Nas and Marley had the world listening on Saturday night. With an album coming and perhaps a movement in the making, these musicians, two sons of family tradition, remain rebels.

HipHopDX: How do you think the Distant Relatives album will affect your musical legacy?
Damian Marley: I think it’ll be another great addition to it. Another block in the whole building.
Nas: [Laughs] I feel good about it. So I can’t say how it’s gonna affect my musical legacy. I just think that with everything I do, I want it to mean something. Like [Tony Montana] said, ‘I tell the truth, even when I lie.’ What he was sayin’ is, he never lies. He’s honest, even when he makes mistakes or misjudgements, he did it in truth. Everything I’m doing is because I feel right about it. The benefit of it [is] we contributed something to the world. Something like this…I don’t know who’s gonna like it, who’s gonna hate it or whatever, but it’s another contribution to the world. One more thing to just listen to.

DX: A lot of artists today aren’t even in the same state or studio when they collaborate. You guys spent months together in Los Angeles recording this. What commentary do you think work like this – a purpose like this says about the real reason artists collaborate?
Damian Marley: In general, I think it reminds ya that the root of music is creativity. It’s not even about collaboration; it’s just something that’s different, creating something for the sake of just wanting to do good music. Not everything always has too thought-out. It’s important and it shows a lot about us to just be creative rather than to do something, like I said, just for the sake of doing something.”

DX: I’m curious to know what the conversations before tonight’s panel have been like with DJ Kool Herc and Big Youth?
Nas: I just saw Kool Herc, man. We’re ready to see it all on the panel. It’s love. Kool Herc is a pillar, man. He’s a founder of the game.

DX: I can preface this in saying that I’m a white man asking this, but X-Clan, Poor Righteous Teachers, Big Daddy Kane taught me a lot about a culture that was not presented to me in school. I’m curious to know what awareness you both think this album will raise after it’s heard, as well as through events like tonight…
Nas: I think Hip Hop was the first Internet. Reggae music was the first Internet. It was the [search] engine before Google. With that said, we just do what we do.
Damian Marley: It’s food for thought – the greatest thing. It’ll raise some questions and [put down walls] that people have of what we’re speaking about. This album, this event, this interview right now, everything in some kind of way raises awareness.

DX: Last question: can you both spotlight your proudest verse or song from the album? That’s a loaded question, I’m sorry…
Nas: That’s crazy! That’s a great question! There are great songs…

Waterflow: Salute. [My name is Waterflow] from Senegal. It’s an honor.
Nas: We’re glad you’re here.
Baay Musa: We’re all grateful of the work you do. Africa has been waiting for this for a long time.
Waterflow: In Africa, just one word in one rhyme, if you just say “Africa” in a rhyme from a brother from overseas, we love that brother more than anybody. And I’m from a [French-speaking] country.
Baay Musa: We feel like we’ve been left behind. We came to this country ’cause we love this country, yes, but ’cause we love Hip Hop, me and [Waterflow], since we were 12 years-old. Hip Hop brought us to this country; we didn’t come to see [The White House]. Through this music, and seeing our brothers over here – we were born after colonization, [but we were still curious about black people in America]. We feel more connected to these people. We’re watching these videos and we see these brothers talkin’ about struggle. We’re African; we really relate to struggle.

[Nas and Damian Marley both laugh]

Baay Musa: When we were young we used to say that the truth is hiding somewhere behind the rhyme. When we grew up, we found the truthful rhymes. I’m from a Muslim country; everything is rhyme. Only the music can get us out of the struggle that we’re livin’ in, ’cause only music can do that.
Waterflow: When I came to this country, the only language I was speaking was Wolof, French and Hip Hop. Not English brother, Hip Hop! Everything in life, I believe that this was supposed to happen. Africa has been waiting for this. One love.

DX: Can I just get a reaction from what he just said. I can’t even begin to ask another question after that…
Nas: That’s a movie, a book. What he just said was everything. He said he didn’t know English, he knew Hip Hop. Kool Herc just said, “I was on a Hip Hop passport.” That’s what got him here. Wow.