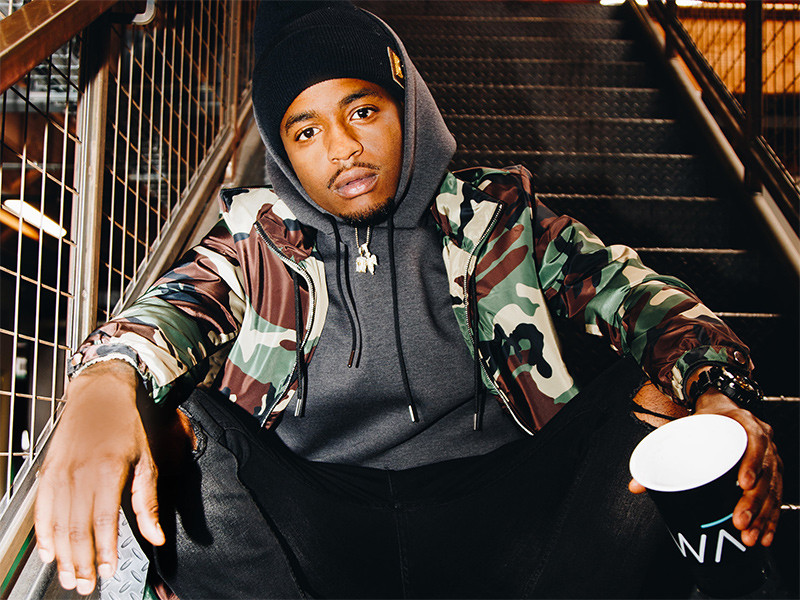 The Cleveland Hip Hop scene has been rapidly growing with artists like Machine Gun Kelly and King Chip dropping a steady stream of releases that have gained national attention. DubXX, Machine Gun Kelly’s longtime collaborator, has had a hand in building the scene. For the past five years, DubXX has been a key part of the Kelly-organized EST Fest — a two day music event in Cleveland that brings out both headliners and up-and-coming artists. Besides the musical festival, DubXX has other big plans for 2018 with the release of his single “Flex.”

On the morning before he performed a show in Los Angeles, DubXX spoke to DX about his new release, working with Machine Gun Kelly, and the energy behind the Cleveland scene.

HipHopDX: Who were some of your early rap idols and inspirations?

DubXX: I grew up listening to T.I., Jeezy, Hov, and stuff like that. But I [also] have different kind of idols. I may sound crazy but I really looked up to The Temptations and their whole grind, starting from the bottom. I literally know that movie from top to bottom. I was inspired by the brotherhood and how they went all the way to the fullest to make it happen. Besides, I just like Temptations songs. I was also influenced by Chamillionaire. A lot of people will be like ‘Wow, Chamillionaire?’ But yeah, he was an underground rapper from Houston, Texas who was a big time influencer on me. Him and 50 Cent were the reasons why I wanted to rap.

How did you start rapping?

I met up with a homie named Lil Mike. We used to run around in the streets, playing football and basketball. They used to think I was going to play basketball  but of course that wasn’t going to happen. I went up and checked up on my homie one day and he was just sitting at his home, writing to some instrumentals.

He said ‘This is just a beat and I am writing a little rap to it, you should write something too!’ That was 2007. So, I wrote my very first freestyle to an instrumental — I believe it was the Juvenile song.

How did you first get involved with Machine Gun Kelly? What has his influence been like for your career?

I met up with him through Lil Mike. Me and Lil Mike used to be in the studio all the time and he went to school with Machine Gun Kelly. Mike went to the suburbs for two of his high school years, that’s how he came across Machine Gun. They had a school play where they were Chuck D and Flavor Flav, so they had to perform with each other. They came up with a rap and Mike brought them over to the studio where me and my brother Slim — who is Machine Gun Kelly’s hype man right now — and it was just history from there. We locked in and became friends and continued to chase. That’s how we ended up dogs.

Who are some up-and-coming Cleveland artists you’re excited about? What makes the Cleveland scene unique?

It’s a lot of really humble artists. It’s a variety pack, a lot of artists in Cleveland. Everyone is hungry. Cleveland is the city of the underdogs. Everyone feels like they have to prove something and show someone something. It will be better if we can officially unite and do what Atlanta is doing and do what LA rappers do, when people clique up and stuff like that. We are a dope force when we’re united together. There are a couple of dope artists coming from Cleveland. We got homies like Machine Gun, Tezo, Ezzy, and King Chip.

Can you tell me a about how your new single “Flex”? How was your approach different than previous singles?

My brother SlimXX, he produced it. Like I said, he’s a hype man for Machine Gun Kelly. Slim is also my blood brother, we come from a big family. My guy Danny from Ethika, which is an extreme sports underwear company, he reached out to me last year because they did a mixtape for them.

I was like ‘Yo, next year can I be part of that?’ He said, ‘I got you Dub.’ So, this year he ended up hitting me in November. We were doing that tape and I said let’s have Slim make a beat, we write this song and man let’s put it out. We were on the mixtape with 20 other mainstream artists from 2 Chainz to Lil Wayne to Lil Skies to all these other dope artists. Me and Slim strapped it up and delivered a dope single. Out of that single, we got our own exclusive underwear too. I got a pair and he got a pair. Ethika uploaded the song on their Soundcloud and I was just getting nothing but good feedback.

Due to all the good feedback, we thought it would be dope to make “Flex” the single. We got it all prepared, shot a video three weeks ago, and are going to re-release the single May 18 on numerous platforms. It started out as a single for someone else’s mixtape, ended up being super hot, and now turned into [its own] single.

Hopefully, I will go on tour. I have been talking about going on tour with Machine Gun Kelly. I just been out in LA, trying to move around and getting in the loop and figuring out all of these other opportunities that need to be approached. In August, me, Machine Gun, and my camp have a festival of our own out in Cleveland called EST Fest. It’s our fifth annual festival between August 3 and 4. I will be performing there with over 7,000 attendees, fans, and family.

Do you have any other collaborations happening in the future?

I haven’t gotten too much with different artists. You know with the home team, me and Kelly are working on his album. We got some collabs that we want to put out too. Hopefully after “Flex” drops, I will be able to link up and collab with more people. Right now, I am just being in touch with different producers. I am down to work with any artist as soon as that time comes.

[This interview has been edited and condensed for clarity.]