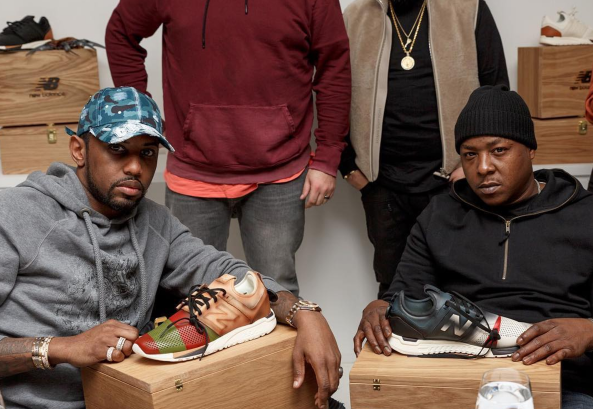 Last Saturday (Jan. 7), New Balance teamed up with Fabolous and Jadakiss for the release of their new sneaker the New Balance 247 Luxe. Despite the streets of New York City being blanketed by a sheet of snow, ravenous fans filed through the doors to witness two of Gotham’s biggest veterans bless the stage. As rap junkies anxiously wait for Fab and Jada’s long-awaited project, Freddy Vs. Jason to drop, the two rappers weaving their ways together through different collaborations – like with New Balance – to bolster their release.

Prior to gracing the stage, Fabolous and Jadakiss sat down with HipHopDX to discuss their newest collaboration with New Balance, the state of the New York Knicks, their NBA comparisons, the status of Freddy Vs. Jason, and why they feel more than blessed with their longevity in the rap game.

HipHopDX: What made you guys decide to link up with New Balance for their new sneaker 247, considering you both are very selective about teaming up with certain brands?

Jadakiss: He [Fabolous] really brought me in on this, so that’s a question you have to ask him.

Fabolous: I thought it would be cool for us because I think it’s a classic brand. They’ve been around, you know what I’m saying? It’s not like their new to the culture, but they were bringing a new shoe to the culture. They’re bringing a new style of shoes to the culture. It’s the same thing that we’re trying to do musically. We have a new shoe, we have a new project. It went together. It was an easy situation. We both are fans of New Balance. We probably had a closet full of New Balance in our day, so I think it was an easy marriage. It was an easy link-up. That’s where it really stemmed from at first. As long as it’s easy, then that’s a relationship we can grow even more.

So, Jada, did Fab’s decision to link up with New Balance make this an easy yes for you to be a part of the mix for the 247 collaboration?

Let’s take it back. Do you guys remember the first pair of New Balances you bought or even your favorite pair?

Jadakiss: The first pack originated from Yonkers. I remember I got the James Worthy 740s. They’re the high-top joints. All of the big guys had them and my foot was able to catch a pair. I remember my grandma got me those. You know, that was a good Easter (Laughs).

Fabolous: That’s crazy that you associated whether your Easter was good if you were fresh or not (Laughs.) Mine was I think was the low-cut 574.

Fabolous: Yeah, I got them because I seen all the dope boys around in the hood – they had them. I was like, “Yeah, I got to get a pair of those.” I finally finessed my mom to getting me those joints. They were the navy-blue ones.

Lifestyle: Layered in premium leather style and synthetic nubuck, the 247 Luxe retail for about $120.

Those were very dope selections. I know you guys are die-hard sports fans and love the Knicks to death. What’s your current assessment on the Knicks and how they’ve been playing so far with Rose and the emergence of Kristaps Porzingis?

Jadakiss: They’re still figuring it out. I definitely like what I’m seeing. I think they’re having trouble closing out games. That’s due to the lack of strength on the bench. That’s where I really think we’re lacking. If we had a little stronger bench, I think we would be a little better, but they’re doing alright.

Fabolous: I think they have a lot of talent. I do think they need to build on consistency and that could possibly be like closing out games. I just think that they have so much talent – even with new talent like Porzingis. Melo is always Melo. He’s the staple. Derrick Rose is showing that he still got some pep in his step ‘cuz that was the question he had first coming in, but I think he’s answered that question. I think that they’re starting to gel more as a team. They just gotta be a little bit more consistent. They could beat a top team and then lose to the Pelicans. They could flip-flop.

I remember in a past interview that I had with you Fab, I asked you to give yourself an NBA comparison. At the time, you said Melo. So, with Jada, if you can compare yourself to anyone in the league, who would you choose and why?

Fabolous: That’s a good one.

Jadakiss: I’d compare myself to Klay [Thompson] because you know, sometimes they forget about me and I’ll just come out of nowhere and drop 50 on them.
Fab, do you still maintain that Melo comparison, and if so, what similarities do you feel you two share now?

Jadakiss: I was gonna say Melo, but he already got it (Laughs).

Fabolous: Yeah, I think everybody knows what Melo can do. He consistently did it. He just went to the Olympics and got the gold medal. He plays amongst the elite. Even though that was an older comparison, I think it still stands. I think Melo hasn’t dropped off on his game. He’s still a top scorer in the league on one of the biggest brands in the NBA, the New York Knicks. Whether they’re a bad team, the Garden is still the Garden and the Knicks are still the Knicks, you know what I’m saying? So, overall, I’d still stand on the Melo comparison.

Everybody has been dying to hear Freddy Vs. Jason, especially after some of the freestyles you both dropped together. If you guys can describe the project in one word, what word would that be and why?

Jadakiss: I ain’t really hear it in a while. You know, he’s [Fabolous] computer savvy. He got it all together. We happened to have a show in Orlando and we were taking a jet back to Miami. I got a couple of drinks in him. By the time we landed, he was feeling good. We got in the sprinter and he was playing them. I was like, “Damn. This shit sounds good.” I ain’t hear it in so long and to hear a few of them back-to-back…to hear three or four of them back-to-back, it felt real good. So, I’m anxious to get the joint out. It’s been awhile since I heard them again.

Jadakiss: I would describe it as we were really taking our time. Like I was telling the last dude, we were cooking a home-cooked meal.

“In the microwave era, we using a real oven.” — Jadakiss

Fabolous: We pulling the pots out and getting the recipes. Calling grandma up to get the recipes.

Fabolous: That’s what I would say, it feels like a home-cooked meal. It don’t feel like you popped it out of the freezer and throw it in the microwave.

Sticking to the sports theme, if you guys can compare yourselves to any duo, which twosome would you choose and why?

Fabolous: That’s a wide question because with each player comparison, there’s a couple of guys you would sleep on and forget to bring up.

I might go throwback [Russell Westbrook and Kevin Durant] considering you guys are both killers with the punchlines.

Fabolous: There’s a lot of ways you can look at that, man. We got the theme with Freddy Vs. Jason, where Jason, you knew he was killer. You knew his work and you knew what he do. Freddy was a killer, and he might be a little more witty, cuz he talk more. The Jason character didn’t really say much, but you knew he was there. You can’t even escape it. Once you heard those footsteps, you knew he was in the area. There’s a lot of comparisons when you want to compare to things, but that was one of the ones we were looking at with Freddy Vs. Jason. When it came to villains, they were always the two that were brought up.

The Custom @newbalance #247 Freddy vs. Jason Pack by @mache275 for Friends & Family only. [shot by @evanpierce] #NewBalance247Dinner #LifeIn247 #FreddyVsJason #NYC

Nightmare At Camp Crystal Lake: Fab says the album is coming in due time.

Lastly, considering you both are legends and have had longevity in the game, if you can use one word to describe your career, what word would you choose and why?

Jadakiss: I say blessed cuz I been through a lot. I mean, everybody been through a lot, but I’m just saying as far as music and the industry, I’ve been on Arista, Interscope, Def Jam, Ruff Ryders, Bad Boy, Roc-A-Fella, Roc Nation, but still always The LOX.

Fabolous: I would say…

Jadakiss: Before he even go, I would say why blessed for both of us. It’s because he came in the game shortly behind us and if you go back to the rosters of the labels or what was coming out, a lot of them dudes are gone. Like, they’re not dead, but as far as having a rap career, or doing any kind of branding, they not only off the roster, they off the map, B! Dudes is wiped out. I came in when I came in, and he came in when he came in.

Not a lot of people have that longevity.

Jadakiss: Nah. Blessed is a very strong word, even with whatever he gon’ say.

Fabolous: I wanna take blessed too, but I didn’t wanna take it because he took it. When people ask how I’m doing, I always say that I’m blessed. I’ll give a word for both of us. The same way he used blessed for both of us, a word I’ll use for us is consistent. We got consistency over time. Through all of the different avenues that we went through, you have to stay within your lane and be consistent in that. I think we both been able to do that.