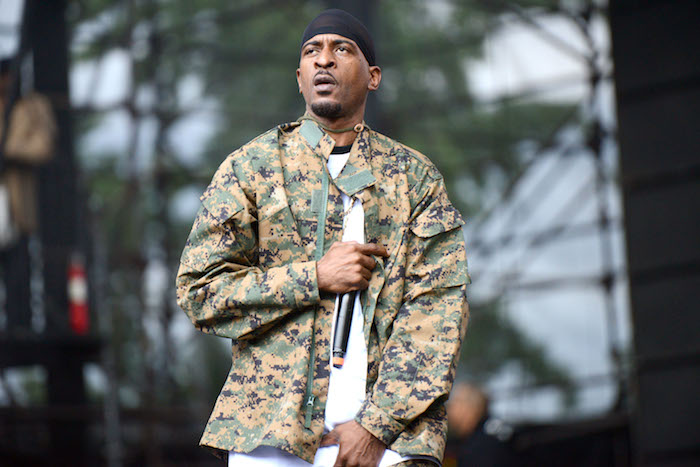 Scientists and historians generally mark time and world history events as B.C. (Before Christ) and A.D. (anno domini— In The Year Of Our Lord). In rap music and Hip Hop culture, the marker that parallels this should be B.R. and A.R.—Before Rakim and After Rakim, respectively. Prior to the arrival of The R, rap music was finding its feet in New York City, Los Angeles, various blocs that it infiltrated. From 1979 (when rap records first hit the shelves) through 1985, the genre’s beats and lyrical styles across the Hip Hop landscape had a groundswell with thematic structures in a regionalized format. After Rakim Allah hit the scene with “My Melody” and “Eric B. Is President,” he wasted no time telling you that “he came in the door” and slammed it shut for all MCs to drop their rhyme books and stop screaming and smiling like giddy school children onstage. He meant business, and no competition could parallel “the god.” Done deal, “no mistakes allowed” to determine his presence was a paradigm shift.

In terms of numerology, the release of his iconic debut album Paid In Full with production partner Eric Barrier on the seventh month of the Gregorian calendar on the seventh day in 1987 was all too perfect in itself without coincidence. From its album cover that reflected Hip Hop’s mantra of economic empowerment, to the James Brown and R&B sample loops, eerie keyboards, primal yet beautiful scratches and DJ cuts, and drums that sounded like Hank Aaron smacking his MLB-record setting home run, the album changed the sound of rap forever and a day.

30 years later, after Marley Marl and MC Shan had initially cracked up laughing at the 18-year-old nicknamed “Pop” from Wyandanch, Long Island because of his unorthodox monotonous rhyme style, legendary rappers and producers across the map have exalted this former star high school quarterback, devout Five Percent Nation convert, jazz instrumentalist, DJ, beatmaker, Pan-Africanist and metaphysician as the greatest MC to ever touch a mic. Rap icons since have watched his throne: the genre’s most storied martyr 2Pac, A Tribe Called Quest, and Wu-Tang’s Raekwon and Ghostface have each covered his music and lyrics in their own best work; DMX videorecorded himself being starstruck in his presence; 50 Cent, who told us on his hit “Hate It Or Love It” featuring Game that his “favorite rapper used to say ‘Ch-check-check out my melody,” to begin the song; Snoop Dogg considers Paid In Full to be his favorite rap album ever; Mannie Fresh and Scarface uphold him as the greatest MC; Nas sports “God’s Son” tattooed across his stomach and named his sixth album as an homage to his main influence, while Common’s tenth album Nobody’s Smiling was done in the same manner; to A$AP Rocky— whose birth name Rakim Mayers was not done sub rosa by mother—titled his seminal sophomore album with the acronym A.L.L.A. because he was “born to do this shit,” and channeled his namesake’s acrobatic rhyme style on 2015’s “Lord Pretty Flacko Jodye, Pt. 2.”

The rhyme deity spoke in depth with his influence on the rap game, qualifies how DJ Jazzy Jeff and the Fresh Prince’s “Summertime” was possibly his song initially, details his political views with concerning survival tactics to not get killed by police and the #BlackLivesMatter social media movement, and Paid In Full roots in the cultural lexicon since its release. The microphone soloist knows that it’s been a long time since 1986, but he still knows how to drop science on his audience with the unmatched styles and rhythm to hit ‘em.

DX: I recently heard Eric B. on The Combat Jack Show state that the  beat to DJ Jazzy Jeff and The Fresh Prince’s classic “Summertime” song was originally slated for you. Can you verify that?

Rakim: Nah, it was ironic that me and Eric B. had sampled it, and we had it ready to go. But when they came out with it, a lot of people thought it was me because of the style he used. But it was one of those things where that was them. I didn’t write it. That was Will and Jeff.

DX: But Eric stated that he had crafted the beat for you, but some industry people and friends who heard it before it came out were in your ear telling you that the beat was somewhat soft and out of character for you. Is there any validity to that?

DX: You stated on “I Ain’t No Joke” that you’re “no comedian.” But I noticed onstage when you perform that you have a humorous side that you never really exposed on record. Is that why you did the recent Sprite commercial to shed light on that part of your personality?

Rakim: [Laughs] Nah, nah, that was just something that they just called me up for that one. It just came out like that. You know, I like having fun, and I’m up there in age, man. I remember growing up not saying much.

DX: Speak when spoken to?

Rakim: Yeah, I was always absorbing. Now I just feel like I gotta enjoy life while I can. Joke here, and humor there makes the day go a little better.

DX: Even though the Cold Crush Brothers pioneered the Mafia gangster fashion when they performed onstage with Tommy guns and expensive suits in the late 1970s and early 1980s, your video for “Follow The Leader” was highly influential on Mafioso imagery in rap music videos after it came out in 1988. Who wrote the treatment for that video?

DX: Did  you help conceptualize it at all?

Rakim: I remember sitting with my man going over some concepts. And he took he took it home, came back with the treatment, and we kinda said, “That’s it.” Nahmean? We had a vision for it, but where he took it was all his. And [we] were all pleased with what he did because we didn’t expect that. And the imagery was crazy.

DX: What was the hardest lesson that you learned when you entered the music business as a youth beyond having rap as a hobby like you mentioned in “Microphone Fiend?”

Rakim: I would say the biggest thing I learned is to stay true to yourself, what you believe and try not to let anyone deter you from that. It’s real hard in [the industry] to express yourself the way you want. You can get caught up with the demographics, the masses, and things of that nature. Try to stay true to what you believe, and let your heart speak through your pen. And your mic is what I found to be priceless. I try to stick with that.

DX: You’re not very active on social media. But what’s your standpoint on the power of social media generation’s reaction to the recent murders of Philando Castile, Alton Sterling, and crimes by the police?

Rakim: We all understand and see what’s going on. Social media gives a lot of people a platform where they can express their feelings. I like to do mine through songs. I let info build up. In some way, it translates into paper whenever I sit down. We all see what’s going on, man. If you’re conscious of where we’re at in life right now, with democracy, rights, and racism, and all these things, you’ll have an opinion like myself. I don’t feel that what’s going on is necessary. I feel it’s a corny word, but the first thing is we’re being stereotyped. If you look a certain way, you’re gonna get handled a certain way. It stems back to stereotyping and racism. So we gotta understand what’s going on, and avoid it as much as we can. You know, I got kids. I got sons, and I try to tell them, “Look, man, when you in the car and you get pulled over, hands on the steering wheel. Yes, sir.” Your job is to either wind up in jail, so I can come get you, or be able to pull off. That’s your job. I’d rather come get you from the precinct for whatever happened, instead of mouthing off or giving them any reason to use that physical abuse. So we have to be smart. Still, what they’re doing is uncalled for, and unfair, man. The laws are gonna have to change. And it’s 2016. We can’t keep using all the laws that was made back in the 1700s. We’re gonna have to understand that times have changed.

DX: The lore behind your first single “Eric B. Is President” is that you laughed hard when you initially heard the beat and didn’t like it.

Rakim: Yeah, what it was is that me and Eric B. was in my mom’s crib and we was going through my mom’s records. And I pulled out James Brown “Funky President” for the beat (mimics the drum pattern). And Eric B. pulls out Fonda Rae “Over Like A Fat Rat.” So I bust out laughing, I fell on the floor and shit, crying, tears in my eyes, literally. He was like “Ra, man, this is gonna work.” I was like “There’s no way Fonda Rae is gonna go with James Brown ‘Funk President.’” And I just laughed at him for about 30-to-40 minutes. Every time I looked at him I was making fun of the shit, looking at him, just laughing at him and shit. But we got to the studio, we made the beat, and at that time I was so used to sampling, and I just couldn’t see how he was gonna make that happen. But we flipped it up, and we sampled the drum and we just kinda sampled [a piece] of the drum. We played the joint over it instead of using the sampled record, and it worked out kinda crazy, man. I was surprised that it did work out like it did. So big up to E on that one. He got over. Word up.

DX: Now that we are approaching the 30th anniversary of Paid In Full, the album and impact and legacy on pop culture and Hip Hop from the 80s through today is monumental. Was that the goal or did you see this with your “third eye” as you claimed on so many of your records?

Rakim: Not at all, man. We had a vision, and we understood what the bottom line was. But we didn’t think it had the effect on Hip Hop that it has. We were speaking to the streets, but it kinda came back and expressed itself time and time again. Some negative ways, and some good ways, but the bottom line is we have to get that currency. We have to.