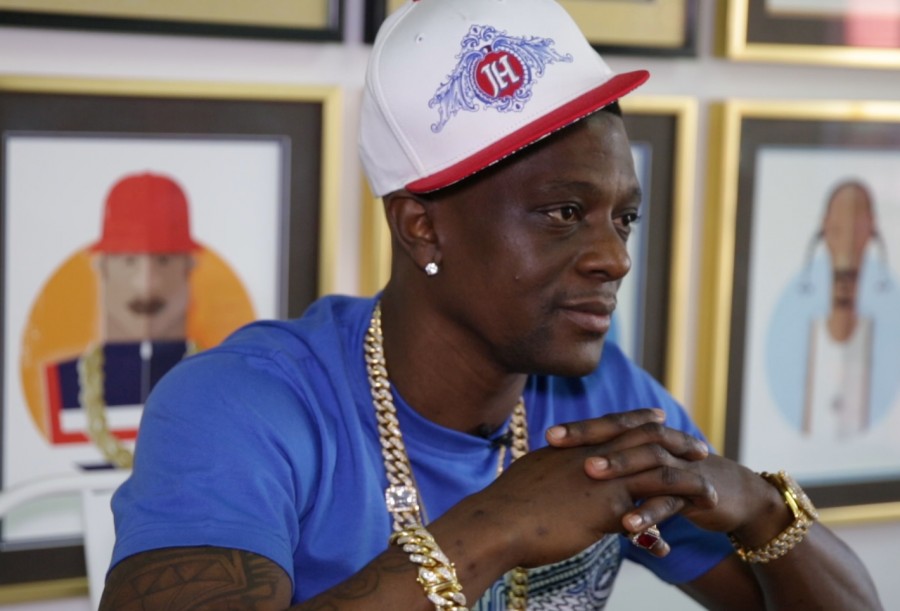 Boosie Badazz spent the past few years breaking away from misfortunes including several years in prison at his career’s height. And just like that, everything in the Baton Rouge legend’s life had seemed to be right back on track. The man formerly known as Lil Boosie was avoiding trouble and gaining more momentum within Hip Hop. The success of Touchdown 2 Cause Hell  in 2015 further exemplified that.

Then, November arrives and he announces his battle with kidney cancer on Instagram. Boosie’s world was yet again turned upside down. Known for his incredibly loyal fanbase, they were in his corner insuring #PrayfaBoosie trended across social media. A successful surgery and rigorous recovery made him better than ever. With a newfound perspective on life, he works even harder by attempting to drop a project once a month through 2016 starting with both In My Feelings (Goin’ Thru It) and Out My Feelings In My Past. When Boosie along with his management comes to the DXHQ, he was his vibrant and jeweled out usual self. The same artists who got his start with Baton Rouge’s Concentration Camp outlet and found himself the biggest rapper of the Pimp C backed Trill Entertainment continues to be a lesson in perseverance despite incredible obstacles.

In part one of DX’s exclusive interview,  Boosie Badazz explains his fight against cancer and how it inspired him to drop an album every month for 2016.

Releasing A Project Every Month For 2016

“You know I had just come back from the cancer scare and I just had the cancer surgery. So, I just came into this year with that motivation to where I’m going to drop every month. I plan on dropping every month. I plan on dropping so much music to where you get tired of me or love me. That’s what I came into 2016 with. I’m about to drop so much music and not waiting for the label. They’ll get behind it or they won’t. We’re going to roll with it.”

Questioning God Once Diagnosed With Cancer

“I was hurt, man. I don’t like to question God, but I was questioning God now. I just beat the death penalty and all this stuff. I already have Type 1 diabetes. I’m like, ‘Why me?’  Then I lost two aunts and an uncle to cancer in 2015. I was like goddamn. I was hurt, man. I started crying as soon as I found out the news. I made the doctors go back downstairs and give me another MRI. I’m like ‘hold on this might be a mistake.’ I made them go back and give me another MRI and they still told me I had cancer. I was just hurt, man. Nobody was surviving this cancer stuff in my family. I took it hard.”

Dealing With Cancer & Healthcare Being A Rich Man’s Game

“It [The Cancer] was affecting me on my weight. I had lost like 42 pounds. I’ve gained like 24 back.  It was stressing me out man. I had to go do surgery and they kept me in the hospital for like a month and a half. I couldn’t do shows and I had people’s money I had to give back. I had to give so much money back to promoters and so many promoters didn’t want to hear anything. They just wanted their money back. I couldn’t go get my bag. I had to pay for my surgery which was $90,000. It was just a lot of stuff going on in my head. I was stressing man.”

“You better get insurance. That’s what I thought. I didn’t have insurance. At first, I tried to write them a check and they told me they would have me in surgery for about a month and a half. I told them I had cash and they said they would cut on me in eight days. So uh, money talks. They were going to set me back until February for my surgery. I went in December 1 and had surgery December 8. I tell people just get health care even though that wouldn’t have paid for the whole bill, but it would have helped. I’m just blessed I was in a situation to help myself. They have a lot of people who might die in two months.”

“That [Recovery] was the hardest part. I was in cancer patient rehab. I had to learn how to walk again because I couldn’t walk.  I started walking after about three weeks. I was walking with a walker for so long that I had to learn how to walk again. That was the hardest part looking at my body. I wasn’t on no chemo or nothing like that. I had a successful surgery. They took part of my kidney out, but I didn’t need radiation or none of that. The process was so hard and it was so frustrating being in rehab cause I’m around these people taking these little bitty steps and I know I’m stronger than these people with all these tubes in their mouths. I felt like they were way sicker than me, but they didn’t want to let me do nothing but what they’re doing.  That really frustrated me like I’m doing these little ass exercises when I can do more than this. That frustrated me.”

“I didn’t really make no friends because I was so angry. I was so to myself. I would get even madder when nurses and other people looked over who I was as a person and go crazy because of who I am. I’m sick, stop trying to take pictures of me. I’m like, treat me as a patient. That got to me. I would basically barely come out of my room and things like that. At a point, the hospital staff would clear the whole floor when it was time for me to walk. I had to walk three times a day and they’d clear it out for me. It turned out to be alright.”

Heading To The Studio Immediately After Being Released From Hospital

“The day I got out of the hospital, I went straight to the studio and recorded Out My Feelings. I recorded it sitting down in a chair the whole album because I couldn’t stand up as it put pressure on my incision. I brought the mic down. That’s how the record came about because I had a lot of anger in me and was out my feelings. Before I went in, I was in my feelings. That was basically how those records came about.”

“It made me feel like I had people in my corner and I always knew that. Even on my journey, every journey I have, I have people in my corner. I know prayer is power. I went against my brother TQ and everybody for posting that I had kidney cancer. They were like, ‘take it down.’ I’m like no, I’m about to let the world know that I need help. Prayer is power so I told the world the truth. My mother was like get further reviews and I had two reviews. I need to reach out to the world for some help. Prayer is powerful. We come from a praying family. I wanted to reach out to the world and get my fans behind me who can talk to God and help me.”

“I’m still me as far as the person. It’s just affected me as far as it makes my grind stronger. It made me cherish life more. As you can see, I’m dropping these albums. It made me stronger business wise. It made me want to have different hustles. Music can only go for so long. After being a rapper, I’m a CEO. I got my Jewel House clothing line doing real good. I got my liquor about to drop Boosie Juice B&J. I got the movie I’m looking for investors for Boosie: The Movie. I’m just spreading my hustle.”

“I’ve been eating better. I don’t do the McDonald’s shit no more and all that other shit cause that’s what causes cancer. I drink a lot of water, mostly alkaline water. I’m way better than I was. I exercise and work out. I’m way healthier than I was before I had cancer. That’s what people don’t understand. I’m healthier now than before I had cancer. I go on stage for an hour and barely sweat. I got hella wind. I run almost every morning. I got hella wind right now.  I had a trainer for a month and a half after I got out of the hospital. I’m in helleva shape right now. I got more wind.”

Next Project Dropping In March Will Be Titled Thug Talk

“Thug Talk means a lot of people won’t understand it, but millions will understand it. If you don’t understand it, you’ll have to listen to it and understand the life of someone living life as a thug. It’s not that we’re made to be thugs, but put in situations to be thugs. In this CD, we’ll describe the life of a thug. The ups, the downs, things you should do, things you should not do, the reasons you shouldn’t want to be a thug and the reason you have to be a thug. It’s going to basically lay it out flat to you. If you want to know how I came up and know how I lived, you’ll listen to Thug Talk. It’s basically just taking a person and explaining what we go through.”

“Thug cool man. Thug is ready to work and I be ready to work. He’s one of the fastest I’ve seen go into the studio and do a verse in three or four minutes. He got a good work ethic and I’ll work with anybody in the industry. I’m all about building relationships and making money. Conversation is money and Young Thug got that go-getter mentality. He is really thuggin so we thug talk. He came to me like, “I gotta do something for you and I got this record called ‘Fuck Cancer.’ I was like awww man. He came over there like I need to use the house to shoot the video so we shot the whole video at my house and it came out straight. I rock with Thug and a couple of dudes in the industry.”

“Jeezy my Road Dawg man. Jeezy was there for me when I was in prison and when I came out, he was there for me. He helped me lock down deals. So, Jeezy has always been that guy who I can call on and be like I need help. Who I can talk to about something and get advice from about certain deals that he’s already accomplished. Before I go into a deal, I’ll hit Jeezy up. How would you go into this situation? Jeezy isn’t just my partner, but a business partner or business lean-on I can talk to about major deals. He’s just a street dude. I don’t judge people on what they do or who they beef with, I judge people on how their heart is. You can’t tell me about nobody and make me feel some type of way about. I go on actions. A nigga never shows me no fake shit, he’s always 100 to me. Fuck what you saying. Jeezy’s actions have always been 100 with me. I keep it 100 with him.”