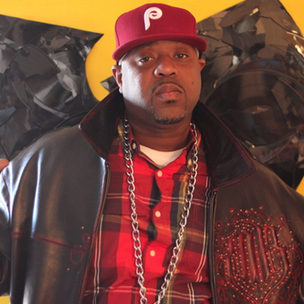 Cappadonna is an artist who thrives under pressure. After being absent from Enter the Wu-Tang: 36 Chambers, a timeless classic, he forced the original nine members of the Wu-Tang Clan to rethink that decision. Ultimately, he was able to impress them enough to earn a spot in the clan as the official tenth member. Now, in 2013, he’s set to release his seventh solo LP since 1998.

Eyrth, Wynd & Fyre, released February 26 through RBC records, is a self-proclaimed “personal gift” according to Cappadonna during a recent phone interview with HipHopDX. What started as a mixtape with producer J. Glaze, eventually became a two-disk LP.

“You can plant a seed not knowing that the springing of it manifests a whole different livelihood, and it has,” explained Cappadonna.

At this stage of his career, Cappa has a commanding grasp on the landscape of Hip Hop. His career speaks for itself, and consistency has remained of the utmost importance. “I don’t care if my album goes wood, or anything like that,” says Cappadonna. “What I’m doing it for is bigger. I’m so blessed just to have the gift.”

HipHopDX: It’s been almost two years since The Pilgrimage. With Eyrth, Wynd & Fyre, the inspiration seems coming from another level. What was your time like between albums, and what was creative process for this album like?

Cappadonna: My creative process for this one was like, “Give ‘em everything, don’t leave no stone unturned.” Whatever I got in the kitchen, I prepared all of that for all the hungry Hip Hop artists. So it was like another way of me just giving, ‘cause it’s better to give than to receive.

DX: You also mention being on some “next shit” a couple times. What’s that in reference to?

Cappadonna: Well being on some next shit is just being able to be on that next level of self-consciousness where you don’t have to worry about what nobody think about your music or what nobody think about you. Your passion is so strong that it shows in what you’re doing. That’s what attracts the people into what it is you’re doing. ‘Cause regardless of how talented you may be—a lot of people are more talented than others—but sometimes they abuse their talent or abuse their privilege that God has given them. Next thing you know, somebody who was more humble or modest about the situation can easily prosper or spring forth, while the confusion is taking place.

DX: So are you trying to spread awareness about being on a higher consciousness?

Cappadonna: Nah, it’s self-consciousness. To some people, it don’t exist; they don’t understand. When you see somebody catching the Holy Ghost in church, or they catching the spirit, or when they drunk, you can’t really understand what’s going on in they mind. [That’s] because the gift they’re receiving is for them. It’s not for you. So all you can do is look and be like, “Wow.” So you lack understanding. With a lack of understanding, sometimes you force others out of the circle, because you not ready for different things yet. You can’t feed a baby grown-man food, know what I mean? You gotta chop that up into little pieces; you gotta “Gerber” that right there.

DX: On “Real Talk” and “Bar B Que” you showcase rhymes that are coming from a more sincere place. Was it hard to keep the music consistent with what your fans know, while blending in newer, wiser lyrics?

Cappadonna: I wouldn’t say that I got any wiser. I’d say that the sincerity comes from me giving my all, regardless of how people view me. I don’t care if my album goes wood or anything like that. What I’m doing it for is bigger. I’m so blessed just to have the gift that sometimes I forget, and get caught up in the hollow-head suction. And that just means you forget that your gift is a gift, and it can be taken away at any given time.

So you’ve got to be yourself. And that’s what I focus on now—just being myself, trying to give them that real and telling them through my experiences how to deal with some of the obstacles today. Like on [the track] “Pull Ya Life Together.”

DX: I was just going to ask you about “Pull Ya Life Together,” which you’ve got a video for. Tell me a little about that one.

Cappadonna: “Pull Ya Life Together” is like, “Look at the old man down on his luck; you don’t know the pain that he was dealt.” You lookin’ at this dude like, “Oh this dude is whatever.” But you don’t understand the trials and tribulations that brought him to this level…he can’t get a job, he on medication. That’s like how we feel when we go forth. ‘Cause it’s a war that we fighting, man. We got to go out there and be the leaders and forerunners of Hip Hop.

DX: So if you aren’t wiser, you’re just more aware?

Cappadonna: I mean, I say consciousness and self-consciousness because it’s something I see in myself. So I don’t say it in a way where it’s boastful to the listener, like I’m wiser. Who am I wiser than? There’s so many wise men out there. I’m amongst wise men right now [laughs]. But I’ve come into a consciousness of myself. So it might appear to be wisdom that I’m giving you, but what I’m sharing is just a fraction of my life worth listening [to] through my music. And trying not to preach, but just trying to reach [the listener].

DX: On “Ease On Down The Road” you mention a lot of rappers by name. Just wondering if you could speak on that track?

Cappadonna: [Laughs] “Ease On Down The Road” man. All of those rappers I mention, it’s like The Wizard of Oz. You’ve got the munchkins and the flying monkeys, all these different gangs and crews encounter—before they’re recognized—the talent within. They knew that they had the gift, ‘cause these dudes who I mentioned are trophies in the game. I’ve been in the game a long time. I’m still trying to reach levels that have surpassed me and my career. So it’s kind of admirable.

DX: This album has two discs and lots of songs. The production has a really full, polished sound overall. How pleased are you with the efforts from your producers?

Cappadonna: I’m pleased about the production on the album, ‘cause for the first [disc], the majority of the songs are with J. Glaze. He was somebody who took time out of his schedule to do all of those tracks for me, and that was a blessing. My gift back to him was to take whatever I had in me and spill it out on that track. [The intent of] the combination was to create a mixtape, but it started rolling over into bigger and better things.

See, that’s how beautiful it is, man. You can plant a seed not knowing that the springing of it manifests a whole different livelihood, and it has. This album got me here, somewhere in Ohio [laughs]. I’m a seed that was planted months, years ago. So I showed and proved right there that I can take nothing, and create an effect. Yessir, praise be to The Most High for this opportunity…for this favor.

DX: Just ‘cause I’m a fan and I’m curious, did you want to keep the Wu-Tang appearances to a minimum on this one?

Cappadonna: I mean, Wu-Tang, we everywhere all the time. This right here, like I said, was just a little personal gift. Now it’s like, we in the mix for a little Wu-Tang product right now. We talking about it, and it definitely looks like it might take place. One day at a rhyme though. It ain’t going to be something that we can force. Let the appropriate people lead the way, and let the others follow. I think it’ll be a nice collective item for Rap’s new generation.

DX: You appeared on The Man With The Iron Fists soundtrack and the Wu-Block album. Do you have any more Clan-related work like that planned?

And by the way, you just reminded me, I am on that The Man With The Iron Fists soundtrack [Wu-Tang Clan track “Six Directions of Boxing”]. That’s great, man. See, my contribution is just…I don’t know what to say. And then I did [“Late Night With Jimmy Fallon”]. I’m not mad at the things I get right now. Some people are blessed more highly than I am, but I take my occasional TV shots and movie soundtracks and all that. Actually, I’m in negotiations with a reality show! So just keep your eyes open and keep hoping.

DX: Oh word, can you tell me anything about that?

Cappadonna: Nah, I’m not going to go too deep into the exclusive. Just know that negotiations is in effect. All good things, man…2013.

Cappadonna: Oh my Lord! How great is that? You said March 24, The Pillage will be 15 years old, since it dropped? Oh man. Oh my goodness. That’s like a birthday right there…bigger than a birthday; that’s a decade and a half. I feel like I need a plaque or something [laughs].

DX: What’s one particular verse from that album that’s still on your mind these days?

Cappadonna: Man, mostly all of them, you know? They stay in my head. Something I keep in my head at all times. Word up. But I think, what stands out for me—when you said that, I thought of “Check For a Nigga.”

“Straight from the heritage public announcers / Ounces of darts / He fucked you over / I stole ya heart / So just in case you forgot about the face / Flash that camera at the all-time great.”