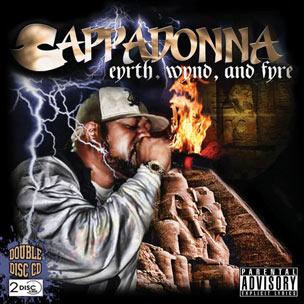 In many ways, Cappadonna is a victim of his past. After debuting on Raekwon’s Only Built 4 Cuban Linx, he followed with what may have been one of the greatest guest verses of all time with his marathon bars on Ghostface Killah’s “Winter Warz.” Much like his highs with the Clan, we’ve also seen Cappadonna’s lows play out in the public eye. Wu-Tang Clan’s unofficial tenth member has voluntarily been homeless and done a stint as a taxicab driver. He doesn’t hide from anything in his past, and that refreshing honesty is the main highlight of his seventh solo album, Eyrth, Wynd & Fyre.

But candor can only take one so far. And in 2013, the only justifiable reason for a double album would be if Notorious B.I.G. and Tupac came back to life, resolved their beef and decided to create new material.

Fellow Staten Island product, J. Glaze was originally enlisted to co-create a mixtape with Cappadonna. The majority of disc one is likely the byproduct of that collaboration. There’s an argument to be made that no producer can get Cappa to tap into his full potential the way RZA can, but Glaze is a more than adequate running mate. This Shaolin pair’s chemistry is best summed up on “Boogah Hill” where Cappa rhymes, “When I put my mind to it / I get deep for them mills / But when I’m not focused / I fall asleep at them wheels / Me and Glaze beats y’all / We dead deep with them skills…”

Glaze generally sticks to bulky basslines and light keyboards with horns occasionally thrown in. The formula works great for a mixtape or an EP, but becomes monotonous over the course of a double album. Disc one’s subject matter matches its dark production but none of Cappadonna’s Wu-Tang brethren make cameos. Half of the appeal of a Wu-Tang solo album is knowing half the Clan might hop on a few tracks. For what it’s worth, Lounge Mode can be found on six of the second disc’s songs, which feature more varied, upbeat production.

Most of the album features Cappa spitting life lessons and anecdotes over production that is passable but never spectacular. When the tracks merit it, he obliges by spitting that off-kilter, stream of consciousness randomness that made The Pillage a winner.

Cappa experiments with a Southern vocal cadence and some note bending on “Bar B Que” to mixed results. Fans of his over-dubbed Kung Fu flick, Iron Fist Pillage, will be happy to hear he still has his trademark humor and occasional self-deprecation in tow.

Age has suited Cappadonna well. He’ll dole out advice, but not money, to the stripper on his lap (“Pull Ya Life Together”) and praise the mothers of his children (“Baby Mommas”). And “Ease On Down The Road” finds him mixing a standard from The Wiz with modern maxims about Ne-Yo. But with 28 tracks to slog through, the times when Cappa and his producers are admittedly “asleep at them wheels” detracts from the overall product. Ultimately, Cappadonna’s most loyal supporters will find themselves buying this one and pairing down the highlights to a single CD or playlist.