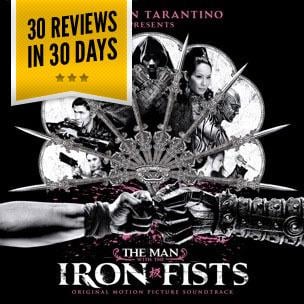 Not only is RZA in the director’s chair for his debut film The Man With The Iron Fists, but as executive producer of its soundtrack he has helmed a cohesive, equally cinematic collection of music that stands on its own and respects the art of sequencing. Like his mentor Quentin Tarantino did with Pulp Fiction, RZA “casts” the OST with artists from his own stable, iconic veterans and hungry newcomers putting a fresh spin on a genre that has grown more anemic with each passing year. Freddie Gibbs and Method Man share the same relaxed rapport on “Built For This” as Travolta and Samuel Jackson discussing the power of foot massages. Meanwhile Kanye West has his own “gold watch” segment as he trades the G.O.O.D. Music flashbulbs for a candlelit corner – snatching the album away for a three minute film within a film called “White Dress” – a murky soulful ode to an “anonymous” woman in a satin gown with no makeup.

One of the standout qualities of Iron Fists is how the production and lyricism are so on point that neither upstages the other. Frank Dukes has captured the denser sounds of RZA’s recent production and scoring work; think Henry Mancini, Ennio Morricone and Roy Ayers huddled around an MPC. Add to that the live instrumentation of Toronto trio BadBadNotGood and some Fizzy Womack rawness and we get the perfect backdrop for Kool G Rap multis (“Rivers Of Blood”), Pharoahe Monch’s assault weapon onomatopoeia (“Black Out”), and the vicious return of Killa Sin on “The Archer.” Thankfully we also get some walk-on appearances from the Abbott on tracks like “Blowin In The Wind,” when he enters in Rzarector mode sharing the pick, sickle and shovel with The Flatbush Zombies. The track pulls off the unhinged dangerous quality that was missing in last year’s Gravediggaz (minus Poetic) “reunion” tracks.

Yet for an album with this many grand scale achievements it ends up faltering in the worst possible place. Rather than a triumphant finale with “I Go Hard” we get a Ghostface verse and Boy Jones’ one contribution swallowed by an overproduced and out of tune Wiz Khalifa hook. The two emcees are lost in what sounds like the latest leak off O.N.I.F.C. leaving us to imagine what Tekitha, Blue Raspberry and a little reverb could have done instead.

Nonetheless Iron Fists succeeds on a variety of levels. As a Wu-Tang project it is one of the most complete and consistent in the post-Supreme Clientele canon. While Method Man and Raekwon don’t appear on “Six Degrees Of Boxing,” the disjointed scattershot feeling of some tracks off 8 Diagrams and Shaolin vs Wu-Tang drops by the wayside as U-God delivers one of the strongest verses of his career. Ghostface crafts a street memoir that begins with a crack-filled tennis ball and GZA’s entrance as the beat switches up evokes the same chills as when he closed out “Protect Ya Neck (The Jump Off).” Iron Fists is also a compilation that wears its love of Asian cinema on its sleeve. The album opener “The Baddest Man Alive” featuring RZA and The Black Keys may sound Southern fried, but it’s by way of a Shaolin temple. Cantopop singer Francis Yip contributes a track that calls to mind the nightclub interludes of Hong Kong action movies like Hard Boiled and City On Fire. Finally RZA replaces the dubbed Shaw Brothers samples that have been Wu-Tang’s signature for the last 20 years with Iron Fists clips and his own narration as the film’s “Blacksmith” character.

The Man With The Iron Fists soundtrack is about action, which the legendary Sonny Chiba says “is also about drama and that if you cannot make the audience laugh, smile or cry doesn’t make you an action actor.” The same can be said for Hip Hop producers, and once again RZA has succeeded admirably.